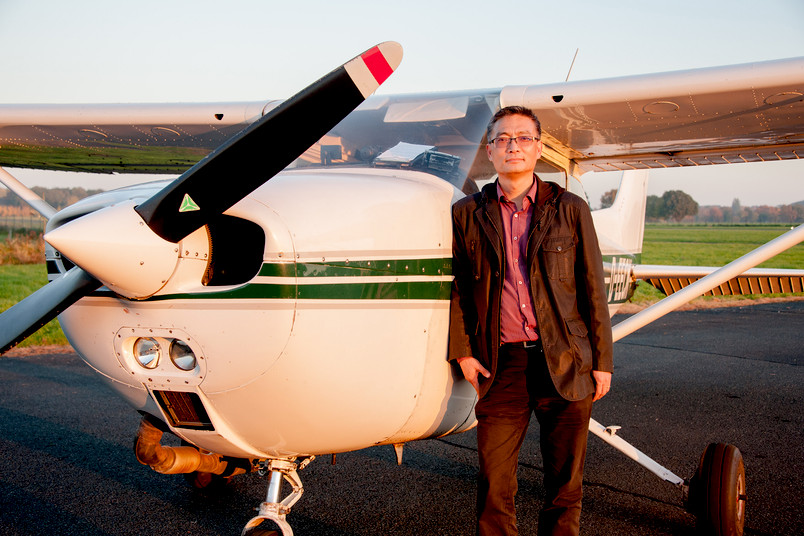 Baoquan Song: searching for traces of former cultural sites is his passion.
© RUB, Marquard
On a ride-along

Soaring up in his small aircraft, Baoquan Song routinely searches from the air for remains of former cultural sites. The bird’s eye view reveals insights that would be impossible on ground level.

I’m not afraid of flying. Nevertheless, I’m not quite sure what to expect when I get into Dr Baoquan Song’s plane. Joining him for a tour over the Ruhr valley, I would like to find out on behalf of RUBIN what being an aerial archaeologist is all about.

One thing is immediately apparent: this job requires not only a lot of flying, but also a lot of driving. Before we can lift off, we have to get from Bochum to the Loemühle airfield in Marl. On the motorway A 43, we get stuck in a traffic jam.

Searching for traces of former cultural sites from the air is addictive.

“Searching for traces of former cultural sites from the air is addictive,” as Baoquan Song tells me while we’re waiting. Just as flying is. It may be exhausting, but: “If you’ve flown once, you want to do it again and again. It’s just so much fun.”

For 20 years, the 54-year-old Chinese national has been discovering and documenting prehistoric settlements, gravesites, Roman military camps, medieval castles, roads and other objects from the air. Today, I’m witnessing his methods at first-hand.

Handiwork before the start

At the Loemühle airfield, the job is commenced with physical effort. The white-green propeller plane has to be pushed over the threshold from the hangar. With a mere four seats, it may look dainty, but it does weigh a full ton. However, because here at the airfield everybody appears to know everybody, help is quick at hand.

Outside, our Cessna 172 stands in dazzling sunshine. It is one of those golden autumn days for which we had hoped for our flight. As it is 3pm already and the sun is rather low, we do not want to waste time. 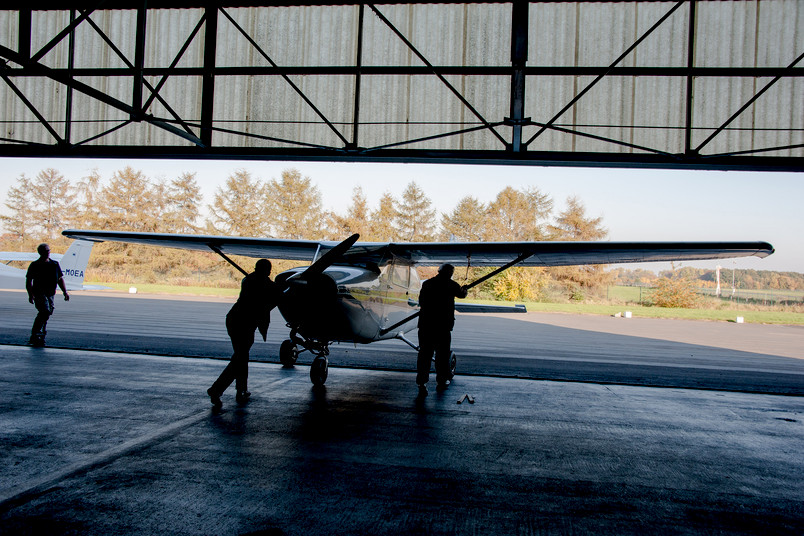 Our Cessna 172, weighing roughly one ton, has to moved by hand out of the hangar.
© RUB, Marquard

Stepping on the metal strut that supports the wing, we climb into the aircraft. Baoquan Song finishes the preparations with practised ease, equips me with headset and checks our radio link. He is used to carrying passengers. In his seminars, he routinely lets students in on the secrets of aerial archaeology, as he tells me with a lot of enthusiasm.

But from time to time, he enjoys flying alone. “This is when I can take deeper plunges, without risking that passengers might feel the contents of their stomach rise into their throat,” says Song and admits that he always used to get sick on an airplane. “So please tell me straightaway when you don’t feel well.” Again, I wonder what to expect.

Baoquan Song starts the engine. Loud roaring and rattling penetrates through the headset and reaches my ears. The aircraft shakes and vibrates so that I start to wonder how I am supposed to put any legible words to paper if I want to take notes.

While my pilot activates a number of buttons, switches and levers, I study the numerous instruments in front of us. Some of them look familiar, a compass, an altimeter, a speed indicator. But there are many others that do not mean anything to me.

When I’m flying, I have to do four jobs at the same time: pilot, navigator, archaeologist and photographer.

I remember something that Song had told me on the way here: “When I’m flying, I have to do four jobs at the same time: pilot, navigator, archaeologist and photographer.” He uses a Velcro strap to attach a notebook to his leg, hangs a reflex camera with a telephoto lens around his neck and grabs the yoke. Slowly, we set in motion and taxi towards the runway.

Song establishes radio contact with the tower, which manifests itself in my headset as loud static noise and crackling. We receive up-to-date information regarding wind force and direction; then, we pick up pace and lift off. The sun is dazzling, it blinds us, but at the same time, it lights up the landscape below us in picturesque autumn colours.

It is not the best season for viewing archaeological sites from the air, as Song told me. But the red-yellow woods are definitely a stunning sight. We have risen to an altitude of about 650 metres, and here in the air the craft flies much more smoothly.

Again, there’s static noise in the headset, then the voice of my seatmate: “Delta-Echo-Echo-Charley-Mike. Cessna 172. Local flight from Marl, just lifted off. We’re on a photo flight and require traffic information.” A second voice croaks a reply, of which I discern only a few snippets among the static noise.

Baoquan Song explains that we have now appeared on the radar screen of the German Air Navigation Services and that we will be receiving information regarding other airplanes in our vicinity. This helps to maintain flight safety. Because unlike a normal pilot, an aerial archaeologist cannot focus solely on flying.

The first traces are visible

In Olfen, we find traces of a former Roman supply camp. Song indicates a grain field with his finger, tilts the airplane sideways, opens the window, lets go of the yoke and points the camera from the window at a spot that looks empty to me. If I’m being honest, all I can see is a green field.

I focus and look more closely. In one spot, the grain seems a bit darker. I’m not sure if this is what I am supposed to see. I sense that, as an aerial archaeologist, you must have a highly trained eye. 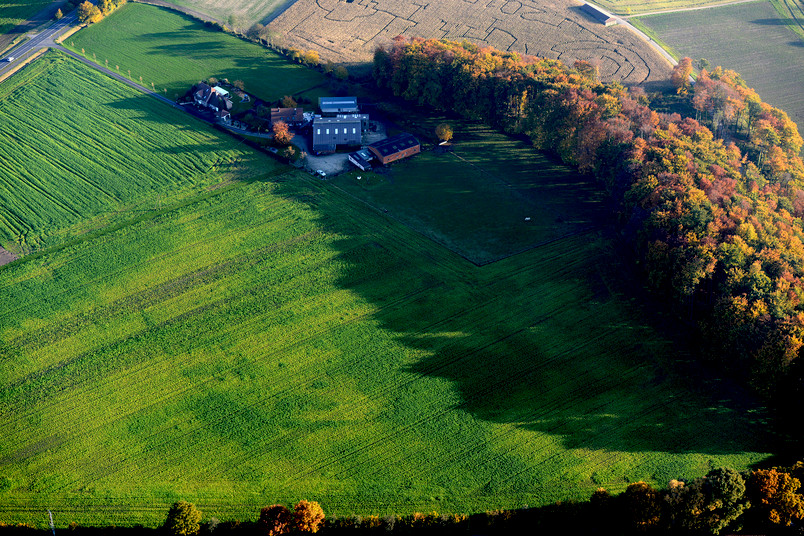 In a grain field  in Olfen, the breastwork of a long-flattened Roman supply camp stands out as a dark green line – difficult to spot to the untrained eye.
© RUB, Baoquan Song

Still, some traces are only visible in certain seasons. For example when the fields are covered in tall plants, old walls hidden beneath the surface inhibit the plants’ growth, thus rendering their patterns visible in the field. Or in the winter, when remnants of old buildings in the soil create differences in temperature and make snow melt more quickly or more slowly than in other spots.

This is how Baoquan Song discovered the traces of a castle in the north of Schermbeck at the beginning of 2015 that had not been recorded on any historical map. More precisely, it was a motte-and-bailey castle, namely one encased in an artificially created earthwork. Several years previously, the aerial archaeologist had already discovered another motte-and-bailey castle on the southern outskirts of the town, which caused quite a stir.

The long-sought motte-and-bailey castle of Schermbeck

In 2012, Baoquan Song discovered the remnants of an old castle in a cornfield on the southern outskirts of Schermbeck. It turned out to be a very specific type of castle, namely a so-called motte-and-bailey. He wanted to publish the discovery in the magazine “Archäologie in Westfalen-Lippe”, which the editor accepted with gritted teeth. That was because she had realised that the site was located just beyond the border to the Rheinland region, i.e. not in Westphalia.

Now, we are circling above the site, which was unearthed by snow. The motte-and-bailey castle is not quite as visible now as during wintertime, but even the untrained eye can pick up perceptible traces in the grass.

In early 2015, Baoquan Song discovered in the snow a former castle with a service section – a so-called motte-and-bailey castle (right). During our flight in autumn 2015, the traces do not stand out quite as prominently (left).
© RUB, Baoquan Song

In the sunlit meadow, the almost entirely filled-up ditch of the outer bailey stands out as a narrow, dark dent. People practised agriculture here; there were storage rooms and workshops, and livestock lived in this service section of the castle. Located in the shadow, the circular remnants of the actual motte-and-bailey castle are more difficult to make out.

Tilting the craft at a steeper angle and opening the window, Song can take a picture almost vertically downwards. From time to time, he briefly grabs the yoke, corrects the course, then he takes photographs, corrects the course, takes photographs.
Per site, he takes ten to 20 pictures. In total, approximately 20,000 photos are compiled per annum, which he then has to archive. He documents each object several times in the course of the year. This is because new details that had not been visible before can be unearthed at any time.

When I take pictures with the window open in winter, my fingers freeze in no time at all.

A fresh wind blows in through the window. Today, the glorious sunshine compensates for the cold. But in the winter, the small craft can become pretty icy. “When I take pictures with the window open, my fingers freeze in no time at all,” relates the researcher. For that reason, he wanted to buy gloves – fingerless ones, to be able to take pictures. “But the shop assistant told me this is something only ladies wear,” he says laughing. “In the end, my daughter bought them for me.”

Debris from the World War

We veer towards Dorsten. A dark line runs below us, completely straight, through a cornfield. “An old road,” suspects Song and takes a few pictures. The only reason why we can see it now is because the farmer had hauled up materials from lower strata to the surface when ploughing. “After the next rain, you won’t be able to see anything,” explains the archaeologist. To the left and right of the former road, we can see round structures. “I assume this is an old railway track bed which was bombed in the Second World War.”

It is impressive how ubiquitous the past becomes when you view the landscape from above. From the ground, you wouldn’t see anything but meadows, fields and woods. Each location for which we head – there are too many to describe all of them in detail – tells a story that would have stayed hidden, had we not looked down on it from the sky.
On our way back to Marl, we have time to enjoy the vista of the towns and of nature in the light of the setting sun. We fly above the motorway A 43 and are pleased to note that the traffic jam has disappeared.

When we land, it is getting dusk. The airfield has pretty much emptied. And so I lend a hand to push the aircraft back into the hangar. I understand much better now why Baoquan Song goes to such great lengths for the sake of research: flying and searching traces is a lot of fun. And fortunately I didn’t get sick either.