Electronic micro labs control chemical processes from the inside

Autonomous micro labs the size of cells that monitor chemical systems  from the inside – pure fiction, as yet. But several crucial steps have been taken.

Lablets, as Prof Dr John McCaskill refers to them, are microscopic electronic particles that he and his partners have developed in the recent years. Currently not larger than 140 x 140 x 60 micrometres, they are capable of exchanging information, controlling various chemical reactions in aqueous solutions, and absorbing information from their environment. One day, they should be able to pair up autonomously and acquire the capability to evolve. In order to construct these micro-agents, researchers have learned quite a few things by observing nature.

We should be in awe of the things that nature is capable of.

The abilities of the micro labs may bring to mind scenarios from science fiction films, where artificial units undergo autarkic development to form larger organisms and, eventually, run out of control. “We are still far from anything like that being possible,” reassures John McCaskill, Head of the group Microsystems Chemistry and Biomolecular Information Processing. “We should be in awe of the things that nature is capable of. Even if our project ends up being one hundred per cent successful, our micro labs won’t be able to perform even a fraction of the things that living cells achieve with regard to evolution.”

Our aim was to cut the umbilical cord to lab control.

McCaskill has long been researching methods of electronically controlling chemical processes. “If we want to control them from the outside, we need comparatively huge, complicated interface structures,” explains the biophysical chemist. Consequently, he explored the possibility of controlling the processes from the inside. “Our aim was to cut the umbilical cord to lab control,” says McCaskill. That would pave the way for numerous new applications.

The micro labs are capable of perceiving chemical signals as well as directing reactions, specifically in settings that large instruments cannot access or where they would be in the way – for example in the human body. As McCaskill elaborates: “Just imagine what a chemist could achieve if he was as small as a cell.”

In order to realise the micro-agents, researchers had to design the required electronic components in a very small format, have them manufactured, and had to figure out the complete production process of the microsystems based thereon. Many of the applied methods were derived from processes that are deployed in the manufacture of traditional microchips. 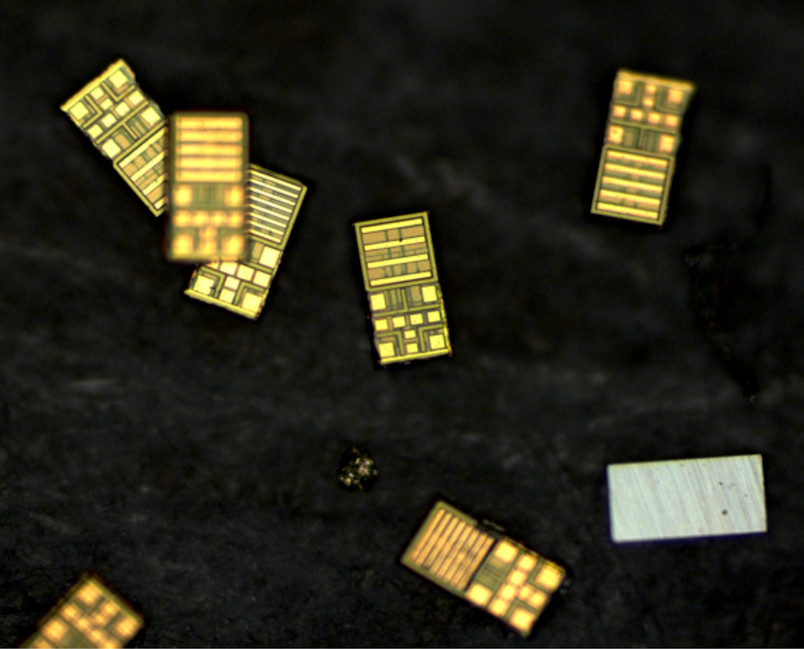 Various geometries of lablets with a size of 100 x 200 x 50 micrometres. They contain an active area and a supercapacitor.
© RUB, John McCaskill, 2016

On one wafer, the researchers implemented half a million micro labs at the same time. Step by step, they assembled the electronic layers on the wafer and fitted them out with a superstructure that will be housing, for example, the power supply unit. Protected and mediated by special coatings, the electronics also work in aqueous solution. In the last step, the researchers have the individual units cut out of the wafer. Following three years of research in the EU project “Microscopic Chemically Reactive Electronic Agents”, short Micreagents, the micro labs boast quite a few capabilities.

Power supply on board

The researchers have developed a supercapacitator for the micro labs, also known as lablets. At present, it stores so much energy that the micro-agents can operate autonomously for 20 minutes. All processes are optimised for using as little power as possible.

Currently, the lablets have to return to a dock to recharge; the dock is a smart surface that is connected to a computer in the outside world. The micro labs can also be programmed via the dock. One day, the surface should become obsolete. Researchers have already developed ideas for how the lablets could draw energy directly from the surrounding solution.

Microscopic electrodes in the lablets can trigger chemical reactions – which ones, depends, among other factors, on the molecules that are available in the environment. The energy necessary to initiate a reaction can be supplied by the voltage at the electrode. Different voltages cause different reactions. Ultimately, the material deposited on the surface of the electrode also determines which chemical processes are triggered.

In the course of those processes, substances can deposit at the electrode and alter the surface; as a result, the micro lab becomes capable of starting reactions that differ from the ones before. The history of which voltage was applied when, determines which molecules are deposited at the electrode and, consequently, which reactions may follow next.

A limited repertoire of chemical reactions has already been tested by the Micreagents team; for example, the lablets are capable of changing the pH-value of the surrounding solution, triggering reactions that generate light or releasing metal ions or other small molecules that turn on specific DNA cleavage or ligation reactions.

Not only can the micro labs influence their environment, they are also able to perceive it, for instance by measuring the concentration of a substance in their environment. Thus, they are in principle capable of moving along a concentration gradient in a similar way that bacteria do, and, for example, to swim to the spot with the highest volume of a specific substance.

Even though McCaskill’s group has not yet tested autonomously movable micro labs in an experiment; some of the lablets have been designed for this task and the process simulated. For this purpose, electro-osmosis is used as an actuator: electrodes can accelerate charged particles close to their surface. Friction is generated between those particles and the particles of the liquid above, thus accelerating the liquid. The momentum spreads to the layers above; a flow is created.

Conducting that flow through the nozzles of a lablet, larger recoil could be generated. The lablets would not exactly break any speed records, but they would travel the length of their own diameters within seconds.

Docking to the surface

The chemists can program the micro labs via the dock and supply them with electricity (fig. 2). To this end, the lablets have to find the way to the surface, remain there for a few moments, and then disengage again. For this to work, the project partners are equipping the lablets with DNA molecules. In nature, those molecules occur in form of double-strands with complementary sequences which converge spontaneously. 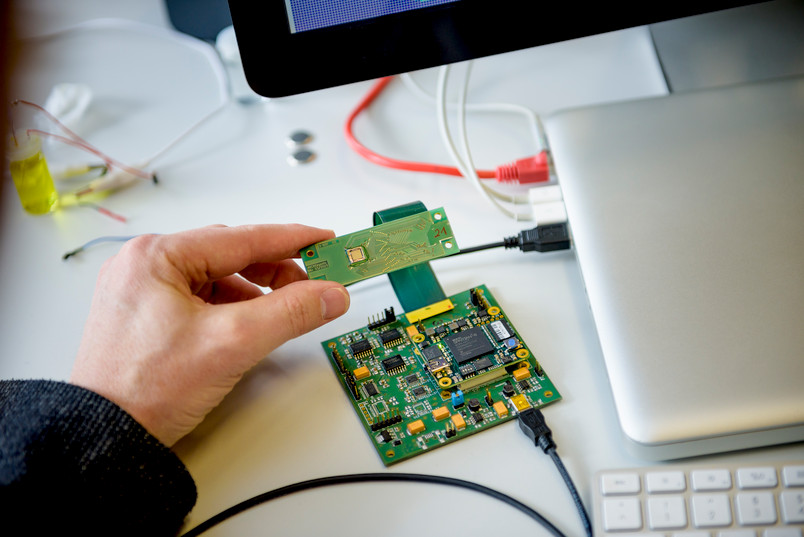 The researchers have mounted a smart surface (golden square) to a circuit board and connected it to a laptop via an interface. They use a pipette to apply solutions and lablets to the smart surface, the so-called dock.
© Damian Gorczany

Project partners are fitting the dock and micro lab out with complementary DNA strands. To ensure that they converge only if required, the chemists used a trick: they are employing triple stranded DNA sequences that can bind only at a specific pH-value. If a lablet is meant to dock to the surface, an electronic signal triggers a chemical reaction which changes the pH-value of the environment; this enables the DNA molecule to converge with the complementary strand on the smart surface.

The lablets should bind not only to the dock, but also to each other. Two micro labs thus form, for example, a joint reaction chamber. It enables them to concentrate and process specific chemicals and to release them back into the solution. They can also exchange information. Currently the researchers are testing this process first via communication with the dock and making use of external wires to the lablet.

But they intend to extend the method for lablet pairs in the course of the project. The lablets are set up in such a way that they can transfer their programming to other units by passing along a sequence of voltage signals. This is how lablets transport information from the dock to other lablets in the solution.

A major strength of living cells is their capacity to evolve. The micro labs have been designed to support this once all functionality necessary for a life cycle has been demonstrated. They have been specifically constructed so that one lablet can programme another lablet by transferring its voltage signals; thus, it essentially passes down its electronic genes, which, in turn, determine the  chemical reactions the micro lab is able to perform.

Researchers can readily set the transfer process to ensure that it doesn’t perfectly work. In this case, variations would occur in the transferred electronic information that would be the equivalent of mutations in genes of living cells. Those variations would cause newly programmed lablets to trigger other chemical reactions than the lablets in which the genome originated.

In the “Micreagents” project, the group headed by Prof Dr John McCaskill at the Faculty of Chemistry and Biochemistry collaborates with other RUB groups, namely the teams of Prof Dr Jürgen Oehm, Chair for Analogue Integrated Circuits, Dr Pierre Mayr, Chair for Integrated Systems, and Prof Dr Günter von Kiedrowski, Chair for Bioorganic Chemistry. Moreover, partners from Denmark, the Netherlands, Austria, Scotland, Italy, the Czech Republic, Israel as well as New Zealand are involved in the project. Project coordinator is John McCaskill. The project is funded by the European Commission.

The project team is now working at full stretch at integrating all functions developed so far in one single lablet. Already, decisive steps have been taken on the way to a micro-size chemistry, which appears a reasonable approach in our world full of nanostructures. “Today’s production world,” says McCaskill, “has been designed for the smallest possible structures. But almost everything is manufactured with huge apparatus.” Whereas resource-saving and sustainable methods would require the deployment of smaller, self-controlled tools.