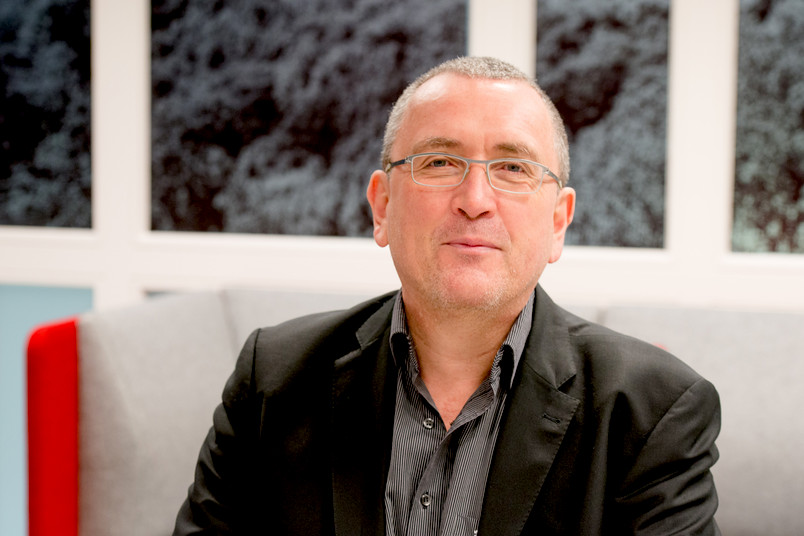 Stefan Rieger was a Heisenberg scholar and has been professor for Media History and Communication Theory at RUB since 2007.
© RUB, Marquard
Interview

When researchers are ahead of their time

Visions of future technologies and lifestyles have influenced many research projects. More often than not, the researchers weren’t aware that they were skirting science fiction.

You are professor for Media History and Communication Theory. Which role does science fiction play in your discipline?
Contrary to popular assumptions, media studies accomplish more than just telling stories of technological devices. They take a step beyond by providing a very distinct history that has a lot to do with phantasms, dreams, ideas, expectations, as well as fears. That’s the gateway to science fiction. The utopias and dystopias treated therein are the elements that interest me very much.

Do you have any examples of an academic work that was deemed science fiction in its time?
Yes, I have two: one from the late 18th and one from the late 19th century. Both anticipated technological features that could not yet be realised in the respective era.

The first one deals with a thought experiment that Immanuel Kant performed in his “Critique of Judgement” in 1790. As a philosopher, he asked the question how humans arrive at certain terminologies. Specifically, how the definition of a beautiful man is generated.

Kant saw two options: either a mathematical approach, where data of 1,000 attractive men are collated, the mean is calculated, and the researcher eventually arrives at the conclusion: a beautiful man is as tall as that, as heavy as that, and his body measurements are like that. Or alternatively, and this is the approach that is of more interest to us, each of those men is photographed and each photo is printed on transparent foil. Then, the photos are superimposed on one another. The spots where the men resemble each other become apparent; whereas individual features fade. Consequently, Kant described an optical automatism for determining an average type.

And that’s science fiction?
The interesting thing is that Kant knew neither photography in general, nor so-called composite photography, i.e. photographs formed by superimposing two or more images. It wasn’t until approx. 100 years later that Francis Galton, a British naturalist and eugenicist, rendered the process reality. Kant’s thought experiment had thus anticipated the technology of superimposition and, consequently, future type images.

Tell us about your second example.
The man in question is the naturalist Karl Ernst von Baer, born in 1792. He considered how the perception of a moment could be depicted using different animals. Humans are capable of absorbing approx. 18 sensations per second. Anything faster, for example a rifle bullet, we are incapable of perceiving – at least not without the aid of any media.

He wrote it as an academic treatise. But passages of the text read like fantastic literature.

In the animal kingdom, the perception thresholds are different. Von Baer thought up a way of depicting other forms of perception. He wrote it as an academic treatise. But passages of the text read like fantastic literature. He rendered processes that cannot be seen conceivable in the modus of language – for example the growth of a plant or the vibration of a string.

Back then, cinematography was unknown. And yet, von Baer had anticipated phenomena of time lapse and time stretch in visual perception and illustrated these two concepts using different animals and plants. He thus considered technological features that would later emerge in the wake of cinematography.

Does that mean that we get an idea of what the world will look like in 200 years when we read science fiction novels?
I don’t believe this is the case. Let’s take the works of Jules Verne or of his German equivalent, Kurd Laßwitz. Cast into literature, they feature future concepts that were ahead of their time, sometimes drastically. And yet, when I read them today, they are somehow touchingly old-fashioned. The texts evoke a certain kind of nostalgia, because they don’t so much deal with the future itself as with future concepts becoming dated and obsolete.

Research is not as target-oriented as many people think.

Are scientists aware that they are pursuing science fiction when they develop new technologies?
No, I don’t think so. Research is not as target-oriented as many people think. Researchers don’t say: I will now invent this or that, it is going to get built and will end up being applied. It’s very rare that this can be planned. As recent works in the history of science demonstrate, the role of coincidences and accidents shouldn’t be underestimated.

Which role do morals and ethics play in future-oriented research? Is everything permissible, as long as it’s progressive?
For a long time, the consequences for politics and ethics were not part of the agenda. But they are today. Let’s take self-driving cars. In terms of technology, the idea could have been realised many years ago. What stops the industry is the question of user acceptance; and first and foremost the legal issues, for example questions pertaining to insurance law. Who is liable in case of an accident? How is a car like that to be insured?

Questions like this deal with ethics – but no longer just with the ethics of humans, but also that of machines. If vehicles discontinue operation depending on their drivers’ health and without consulting the drivers, or if robots used in patient care diagnose the situation at the end of life, renegotiations of the responsibilities are more than overdue.

Which research fields will play a major role for our future?
NBIC converging technologies, i.e. nano, bio, cognition and information technologies. Experts are certain that these four segments will collaborate more closely in future. The opportunities generated through that collaboration will affect our future life – in a way that literary science fiction will have missed.