In order to prevent fraud with digital currency such as bitcoin, sophisticated security mechanisms are deployed. However, they currently consume enormous volumes of electricity.

Today, hundreds of digital currencies exist with which users can transfer purely virtual money. But only one currency has gone into wide circulation to date, namely Bitcoin. Unlike the euro or dollar, it is not associated with a central bank responsible for managing the money. That task is performed in a decentralised form by the bitcoin users.

Those digital currencies are of interest to Prof Dr Sebastian Faust from the research group Applied Cryptography. In order to understand the questions he studies, it is necessary to take a closer look at how the system works.

Interested users can purchase bitcoins in so-called exchanges on the Internet. In accordance with current conversion rates, euros, dollars and other currencies are exchanged for digital money. One bitcoin was worth approx. 390 euros in May 2016. Each bitcoin user has a secret code that assigns them the coins. Bitcoins are accepted by some large enterprises, for example computer provider Dell or the online travel agency Expedia. However, as the currency ensures a certain degree of anonymity, it is also used in many illegal transactions.

In the bitcoin network, virtual sums are assigned to individual users that can be transferred in various transactions. A challenge when dealing with digital currency is to make it impossible for people to spend their virtual money twice. In order to prevent this and other frauds, the system is fitted out with a sophisticated security mechanism.

A percentage of the users, so-called miners, record and monitor all transactions. They summarise new transactions in a block and try to publish that block in a freely accessible database, i.e. the blockchain. The miners compete for speed, because a miner currently receives a financial reward amounting to 25 bitcoins for each new block, i.e. the equivalent of approx. 10,000 euros according to the conversion rate as per May 2016.

Before a miner can publish a block, thus declaring it valid, he first has to solve a cryptographic puzzle, the proof-of-work. That is difficult and requires enormous computing power. All miners thus compete for publishing the respective next block. That happens every ten minutes on average.

In simple terms: the proof-of-work system presents the miners with a mathematical function the output of which acts like a random figure. The miners’ task is to find a specific input for this function so that the output of the function starts with a large number of zeros. The miners cannot approach the solution to the puzzle gradually; rather, they have to try different inputs until they find one that matches the requirements. To this end, they have to perform continuous calculations. But why all that effort?

As the option to act as miners is open to all bitcoin users, it cannot be ruled out that they assume dozens of identities. Could these additional identities help solve proof-of-work puzzles and, consequently, publish blocks in quicker succession? No, because computing power is the decisive factor therefor. 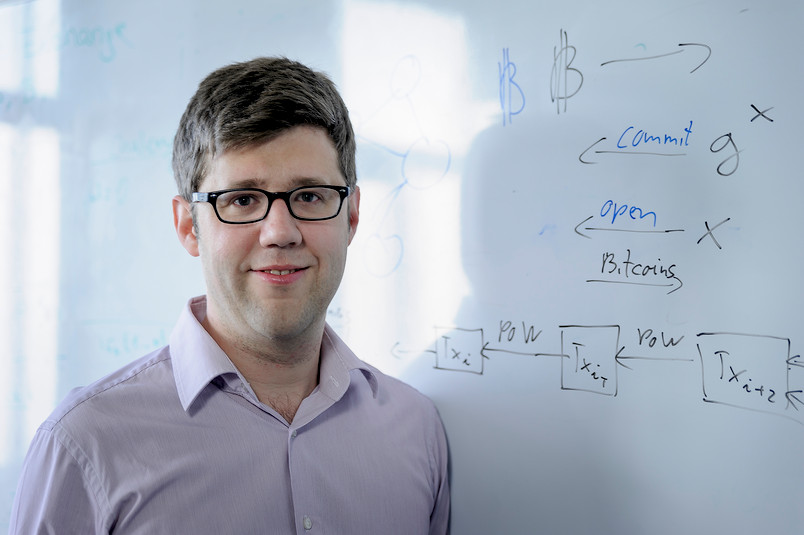 Sebastian Faust is interested in the security mechanisms present in the Bitcoin network.
© Roberto Schirdewahn

Using an off-the-shelf computer, it would take years to find a solution to a proof-of-work puzzle. This is why today it is mostly enterprises who act as miners, or so-called mining pools, i.e. individual users working together and sharing the profits. “The security of the system is guaranteed in the medium term, as long as at least 50 per cent of the computing power is controlled by honest miners,” says Sebastian Faust.

Experts estimate that the bitcoin network currently has a higher computing power than Google because of the proof-of-work method – which means that it is anything but environmentally sound. Together with his colleagues, Faust has suggested an energy-efficient alternative. The Bochum-made puzzle is based on storage space rather than computing power.

In order to solve the proof-of-space puzzle made in Bochum, the user has to initialise it in a CPU-intensive manner; in the process, a huge portion of the storage space on the hard disk is used. Subsequently, he can solve the puzzle without any considerable computational cost. However, this is only possible as long as storage space is actually available.

In simpler terms, the system works as follows: the puzzle solver has to sort a string of digits in ascending order and save the sorted list. When he wishes to publish the puzzle, he is asked to name the digit in a certain position in the list. If he had saved the sorted list as required, he can read the answer in no time.

“This is the basic idea, but in actual fact the puzzle is more complicated than that,” explains Sebastian Faust. A group at the Massachusetts Institute of Technology in Boston and at the Institute of Science and Technology Austria in Vienna has expanded the proof-of-space concept and invented a new digital currency based thereon.

The group from Bochum also investigates other aspects of the bitcoin network, for example the security of smart contracts. Smart contracts are contracts that perform payments only under specific conditions that can be verified automatically. Assuming person A wishes to sell a secret to person B, but doesn’t want to hand it over until they have received the money. Person B, on the other hand, wishes to pay only after they have received the secret. A smart contract would provide the guarantee that both sides will receive the items promised under the agreement.

The technology facilitates fair and simpler payment transactions and could, for example, replace notaries. At the same time, it opens up new application options, such as smart property: automated management of properties via the blockchain, which could become relevant for rental cars or rental apartments. Essentially, smart contracts could prevent fraud and render international trade much simpler.

Sebastian Faust has another plan in the pipeline: “We would like to analyse the bitcoin system formally and prove that it is secure.” The only formal analysis so far has been performed by the system’s inventor Satoshi Nakamoto. This is where the statement stems from that the network is secure as long as honest users control more than 50 per cent of the computing power. However, US researchers have criticised that the assessment is based on a great number of often oversimplified assumptions.

“It is not enough to distinguish between honest and dishonest users in the bitcoin network,” says Sebastian Faust. This is because sometimes it may be more profitable not to publish transactions straightaway after solving the puzzle, but rather wait and see what is going on in the network. Faust: “Bitcoin should be analysed using game theory concepts in order to represent the practice as realistically as possible.” His group’s objective is to accomplish that task one day.