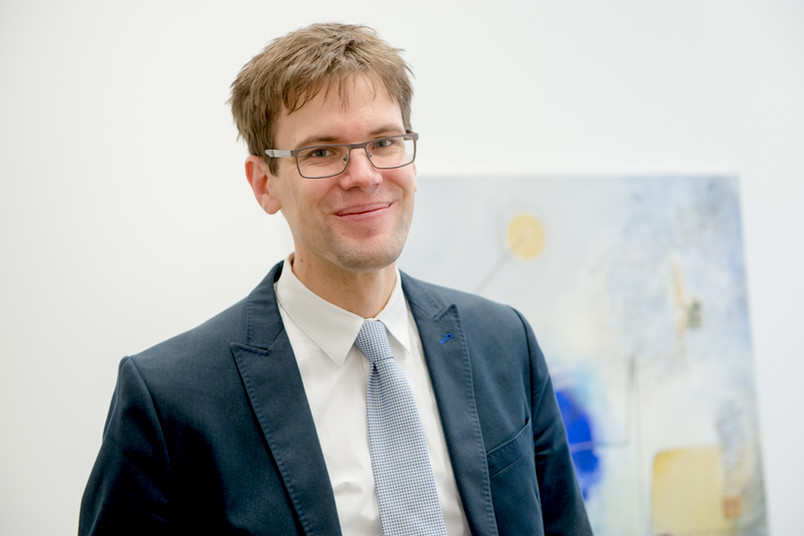 Observing proteins in their natural environment

Without intensive fundamental research, it will never be possible to successfully combat illnesses such as Alzheimer’s or Huntington’s. Simon Ebbinghaus has now been honoured in the USA for his contribution to research.

Prof Dr Simon Ebbinghaus has received the Junior Faculty Award with $2,000 of prize money from the Biophysical Society. The prize was awarded on 11th February 2017 in New Orleans. With this, the Biophysical Society honours scientists at the start of their careers who concern themselves with biomolecular processes in living organisms.

This is precisely what the working group of Simon Ebbinghaus at the Institute of Physical Chemistry II at the Faculty of Chemistry and Biochemistry does: it attempts to understand the structure and function of proteins and other biomolecules, which are often exclusively investigated in aqueous solutions in a test tube, directly in a cellular environment.

Simon Ebbinghaus studied biochemistry and chemistry at RUB and in Oxford; he acquired his degree in 2004, he gained his doctorate in 2007. As a Feodor Lynen research fellow of the Alexander von Humboldt Foundation and fellow of the National Science Foundation Center for the Physics of Living Cells, he attended the University of Illinois as a postdoctoral student. There, he developed a method of measuring the stability and dynamics of proteins directly in living cells with a high spatial and temporal resolution.

Ebbinghaus returned from the USA in 2011. As a fellow of the returnee programme by the NRW Ministry for Innovation, Science and Research, he established his own working group at the Institute of Physical Chemistry II. His research focuses on the incorrect folding of proteins and their clumping (aggregation) in cells.

To this end, the working group has developed new microscopic methods and acquired new knowledge, for instance about the folding and aggregation of proteins. These processes play an important role in the development of neurodegenerative illnesses such as Alzheimer’s, Huntington’s and Parkinson’s. The research by the working group is based in the cluster of excellence Resolv, in which scientists devote themselves to the question of how solvents influence chemical reactions.