What will happen to the buildings above ground if a tunnel boring machine moves beneath them? Engineers calculate the answer to this question using artificial intelligence.

Passengers on a train that goes through a tunnel at a speed of 200 kilometres per hours barely notice it. A few seconds of darkness outside the window, and then the train emerges back in daylight. A closer look reveals the incredible complexity of large tunnel constructions, and it becomes obvious why it takes years to complete them and make them fit for vehicular road traffic.

Tunnel construction today no longer resembles the construction of the first tunnels hundreds of years ago. “Think of mobile subterranean factories,” describes Prof Dr Günther Meschke, Head of the Institute for Structural Mechanics at the Department of Civil and Environmental Engineering at Ruhr-Universität Bochum. Those tunnel boring machines come in diameters of up to 17 metres. They dig the tubes for the new tunnel with a cutting wheel, remove the excavated material and mount the tunnel lining. Under optimum conditions, tunnel construction equipment of this type can advance up to 25 metres per day.

Interaction between tunnel and structures above ground

Engineers give a lot of thought to these conditions. A number of different factors must be considered: the stability and stiffness of the soil, groundwater conditions, and the vulnerability of the structures below which the tunnel is being built. “Buildings affect the settlement trough while the machine advances. The tunnel, in turn, affects the buildings, which means there is an interaction between tunnel advancing below ground and structures above ground,” explains Günther Meschke.

The tunnel builders’ top priority is to minimise potential damage. In the tunnel design phase, the existing urban structures are recorded, subdivided into categories, and assessed in terms of their vulnerability. Based on the gathered results, engineers specify the tunnel track. 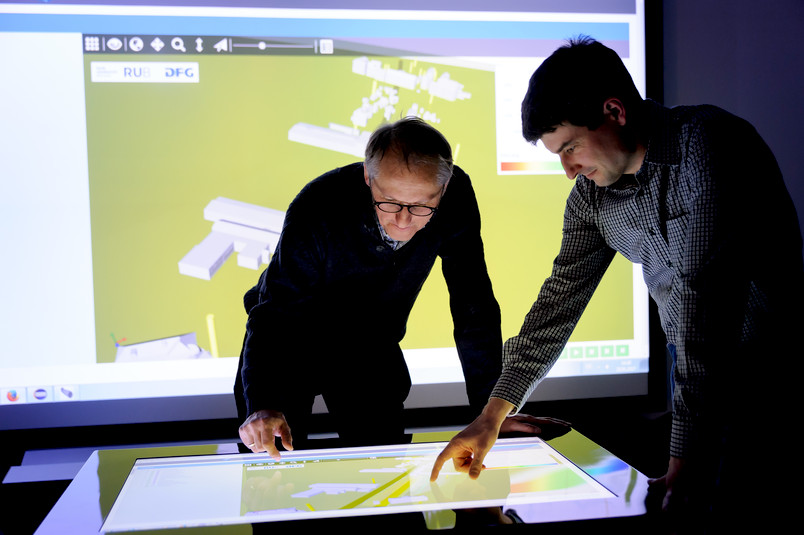 For the purpose of the project, a team of researchers headed by Günther Meschke (left) and Steffen Freitag analysed the susceptibility of structures above ground to subside due to tunnel construction.
© Roberto Schirdewahn

The whole undertaking is even more complicated than that due to uncertain soil properties: for example, no soil is homogeneous; its stiffness varies. The same holds for other geotechnical parameters. A highly complex matter. This is why the process gets really interesting once the machine is building the tunnel – thorough designing notwithstanding. That’s the moment when real conditions become apparent; as a result, engineers must make ongoing decisions about how the machine is to react.

As part of their Collaborative Research Centre SFB 837 “Interaction Modeling in Mechanized Tunneling”, where Günther Meschke is the speaker, the engineers from Bochum have developed a software for tunnel construction. It enables the engineer on location to simulate in real time how the soil and the buildings on the surface will behave, if he changes different tunnel construction variables.

These factors include the rate at which the machine builds the tunnel and the so-called support pressure and grouting pressures in two different locations: in the spot where the cutting wheel digs the tunnel, the so-called heading face, soil would cave in, if the structure wasn’t simultaneously supported by a liquid. In the same way as it does at the heading face, the machine also presses a liquid into the gap between the tunnel tube made from reinforced-concrete segments and the soil. This cementitious liquid will later harden.

Without this gap grouting, the surface soil would subside by 20 to 30 centimetres. The grouting pressure at which the liquid is pumped into the gap has to be exactly right. Is it too low, the area above the tunnel will subside. Is it too high, the area above the tunnel might be pushed upward. The latter, too, leads to serious consequences for the structures above ground.

As decisions pertaining to support and grouting pressures can only be made on location while digging is in progress: a number of values are measured continuously, such as the torque of the tunnel boring machine, the pressing forces, the machine’s position, the groundwater behaviour, and the settlements – including that of buildings above the tunnel, which can be determined based on displacements or inclination angles. Machine operation is then aided by simulation models. “It works a bit like an autopilot,” elaborates Meschke. Essentially, the simulation moves virtually together with the tunnel boring machine, updating the assumptions made prior to the construction with the measured data. Thus, the model gradually becomes more and more reliable.

“The obvious notion is to use the system to simulate various scenarios in order to optimise the whole process,” elaborates Günther Meschke. “To date, we’ve been stumped by one obstacle: it takes about ten hours to carry out such simulations, even on large-capacity computers.” 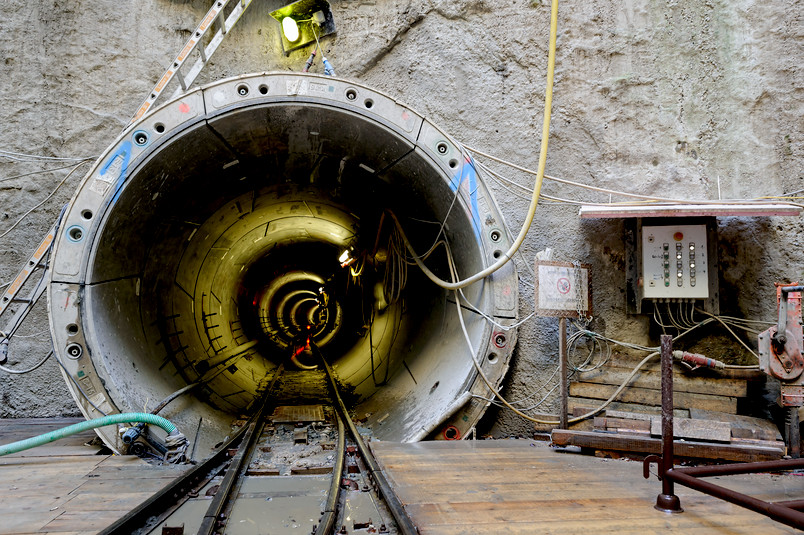 The diameter of the tunnel built by the water board Emschergenossenschaft in Oberhausen is comparatively small. Here, too, a tunnelling machine is deployed that does not just dig, but also fill in the cavity and mount the tunnel walls. (Project Abwasserkanal Emscher, BA 40)
© Roberto Schirdewahn

The researchers from Bochum have developed a solution for performing such complex processes in real time and to predict advancement-based settlements in real time while construction is in progress. The decisive factor was to simplify the complex simulation models by implementing fast surrogate models. They did it by combining two model reduction approaches based on artificial neural networks and Proper Orthogonal Decomposition. “Recurrent neural networks are ideally suited for predicting the settlement process at a few measurement points based on the simulation results,” explains Steffen Freitag. The engineers then use the so-called Gappy Proper Orthogonal Decomposition approach in order to approximately calculate the entire high-dimensional settlement field.

The uncertain geological parameters that had to be factored in constituted a major challenge. This is because reliable predictions are possible only if the inaccuracies of those parameters are considered, for example via intervals. The researchers from Bochum have already developed high-dimensional real-time prediction approaches for intervals. In the next step, they intend to extend these methods for other uncertainty models, such as fuzzy and stochastic models.

Thanks to the real-time capability of the simulation model, an app is currently being designed that can be used by tunnel construction engineers on location. For example, upper limits for maximum permissible settlement of the soil can be entered via the user interface. “If the engineer at the construction site stipulates that the settlement above ground must not exceed ten millimetres, the software calculates how the machine has to be adjusted to make sure that this value is not exceeded,” explains Dr Steffen Freitag, subproject leader at the collaborative research centre.

The researchers are planning to enable users to enter specific maximum values for damage risks in future, too. “If the engineer enters that the probability of cosmetic damages such as cracks in building walls may not exceed 10-5, the app could calculate the settings of the tunnel boring machine for tunnelling in a certain underground section,” says Günther Meschke.

In collaboration with other SFB 837 researchers, Günther Meschke and Steffen Freitag intend to extend the novel assistance system for mechanized tunneling by adding other sub-models, in order to include more safety-based and risk-based steering objectives. Factors such as the stability of the tunnel face and the loading of the tunnel lining under construction that results from the hydraulic jack forces of the machine and the surrounding soil could then be controlled via real-time simulations. “Following the digitalisation of complete construction processes, it might be possible to cover the entire tunnel construction logistics in future,” as the researchers explain.

A novel approach is the integration of the machine data that are recorded every second into the numerical simulation models – i.e. Big Data. Günther Meschke plans to tackle this challenge together with Prof Dr Katharina Morik from the Chair of Artificial Intelligence at Technical University Dortmund.