Did life come from space?

We usually imagine comet impacts as a threat and not as the source of life. But perhaps they were precisely that.

Space. An inhospitable place. With temperatures of minus 263 degrees Celsius close to absolute zero, life is hard to imagine. Even the movements of molecules slow down or come to a standstill in this icy cold environment. And then there is the radiation of supposedly destructive energy, which penetrates the interstellar space.

Until the beginning of the 1960s, it was assumed that this space must be empty, free of molecules, free of chemical processes – as, if there were molecules there, they would have simply been torn apart by the radiation. That was the idea. It changed radically when, in the following decades, first ammonia and water and then other chemical compounds were discovered in the interstellar medium. Molecules that could be the building blocks of life.

Researchers have now verified around 190 chemical compounds in space. But it is still not clear in what way and under what conditions they are created. The team led by Prof Dr Wolfram Sander at the RUB Institute of Organic Chemistry II is interested in these questions – although the core topic of the group is actually different. As part of the Cluster of Excellence “Ruhr Explores Solvation” (Resolv) the scientists are investigating the question of what role the surrounding solvent plays in chemical reactions.

But Sander’s team also maintains intensive contact and an active exchange with experts in astrochemistry in Marseille, Pasadena and Hawaii. The type of research and the methods are similar, no matter whether it concerns astrochemistry or solvation science. 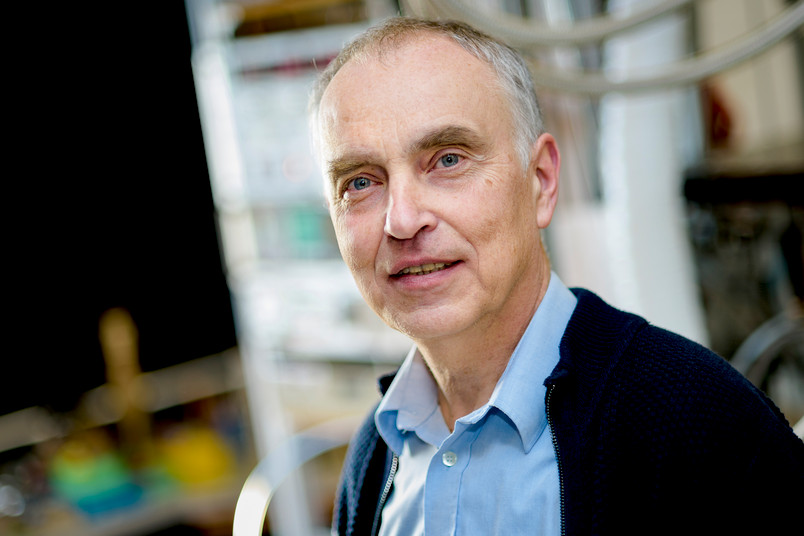 Wolfram Sander conducts research in the field of reactive molecules and attempts to understand how chemical reactions occur in detail. Astrochemistry repeatedly plays a role in his institute.
© Damian Gorczany

“Reaction mechanisms are our central topic,” explains Sander. “We are not only interested in the starting materials and products of a chemical reaction, but want to know precisely how this occurs, i.e. for instance what intermediate products there are and what conditions are crucial.” The work can ultimately also contribute to one of the major scientific topics of our age, namely: how was life created on Earth?

The origin of life

One theory says that the building blocks of life were not created on Earth but came from space. Amino acids, the basic units of proteins, not only exist on our planet. They have also been found in comets. Impacts by these heavenly bodies may have brought the molecules to Earth, where they combined to form larger chemical structures. But how can complex molecules such as amino acids form in the inhospitable conditions in space? This is one of the puzzles that concern astrochemists.

In the lab, including at RUB, researchers simulate conditions from space to understand what chemical reactions could occur there. The temperature, radiation, vacuum and composition of the medium are crucial. 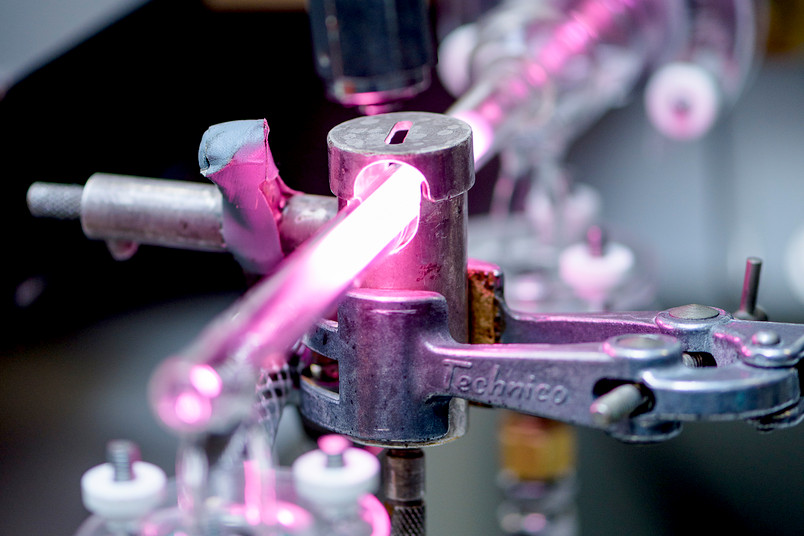 However, the conditions are not the same throughout space. For the experiments, it makes a major difference whether one examines reactions of individual molecules in the gas phase or in the condensed phase, for instance on the surface of solids. “The gas phase has already been investigated relatively well,” says Wolfram Sander. “Understanding chemical reactions in the condensed phase, i.e. in liquids, solids or on surfaces, is much more complicated as many molecules interact with each other here.” Complex chemical processes in liquids are analysed, for instance, in the Cluster of Excellence Resolv.

However, those wanting to investigate theories about the origin of life must look at solids. Comets, for instance, are among the places in space where more complex molecules are created; they have a solid core. Their centre consists of ice – a dirty snowball, as it is called in expert circles. This refers to the fact that it does not consists of pure water ice. Besides the elements hydrogen and oxygen, nitrogen and carbon can usually also be found there. In principle, all the building blocks necessary for an amino acid are thus present.

“In space, we often only see the products of a chemical reaction, but not the intermediate steps,” explains Sander. “We attempt to understand on Earth in what way the products were created.” However, he says that he is not an astrochemist himself. The topic came to him at the institute through good partnerships. Sander’s lab in Bochum among other things specialises in various spectroscopic techniques and is thus of interest to astrochemists. RUB has one of the few labs in the world to own a specially-built electron paramagnetic resonance spectrometer, which can simulate conditions in space. With this device, it is possible to create and provide evidence for highly reactive intermediate products, called radicals, in artificial comet ice.

If we observe reactions in the ice, anything is possible.

At the start of 2017, Teddy Butscher from the University of Marseille was a guest at RUB. He is interested in how simple molecules – such as water or formaldehyde – in ice granules become complicated organic molecules such as glycoaldehyde, from which, in turn, larger sugar molecules could form. He reproduced the reaction mechanism in detail in the lab. Radicals were created as an intermediate product.

If two radicals meet in a gaseous environment, they usually establish a direct bond with each other. “However, if we observe the reactions in the ice, anything is possible,” says Teddy Butscher to summarise his results. The radicals do not immediately continue to react, but can be stored in the ice. If the temperature then increases somewhat, they become free and react to form various intermediate and end products. 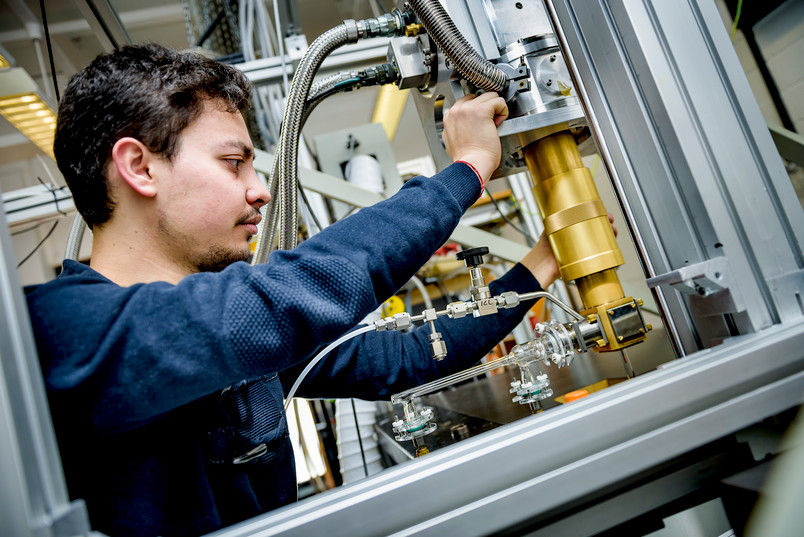 Teddy Butscher is preparing an experiment with electron paramagnetic resonance spectroscopy. This allows him to directly verify radicals that are created during a chemical reaction.
© Damian Gorczany

Just as researchers from cooperating institutions visit RUB, the Bochum-based scientists travel to their international partners for research visits. As part of his doctoral thesis, RUB PhD student Yetsedaw Tsegaw visited the research group of Prof Dr Ralf Kaiser at “WM Keck Research Laboratory in Astrochemistry” in Hawaii. There, he took measurements for two months, which he then evaluated in Bochum – this took a year.

His work revolves around the small molecule hydroxylamine, expressed as a chemical formula: NH2OH. It consists of five atoms: one nitrogen, one oxygen and three hydrogen. These elements are typically found in comet ice. But also in the form of hydroxylamine? The molecule would be a conceivable precursor for the creation of amino acids. If one were to find it, one would be a step closer to solving the puzzle surrounding the creation of complex organic molecules. However, hydroxylamine had not yet been verified in space.

Comet ice in the lab

Yetsedaw Tsegaw wanted to discover whether the conditions in the comet ice actually allow for this chemical compound to be formed. He adjusted the conditions in the comet ice in the lab, brought ammonia (NH3) and oxygen (O2) together in this environment and treated the mixture with high-energy radiation, such as that found in space. He observed the reactions that occurred with a special form of infrared spectroscopy.

The method provides a kind of fingerprint for the chemical sample: infrared light causes the molecules to vibrate; various chemical compounds vibrate in different ways and with different frequencies. The researchers detect these characteristic vibrations and visualise them in the form of a spectrum. By comparing this with a reference spectrum, the observed vibrations can be assigned to certain molecules. 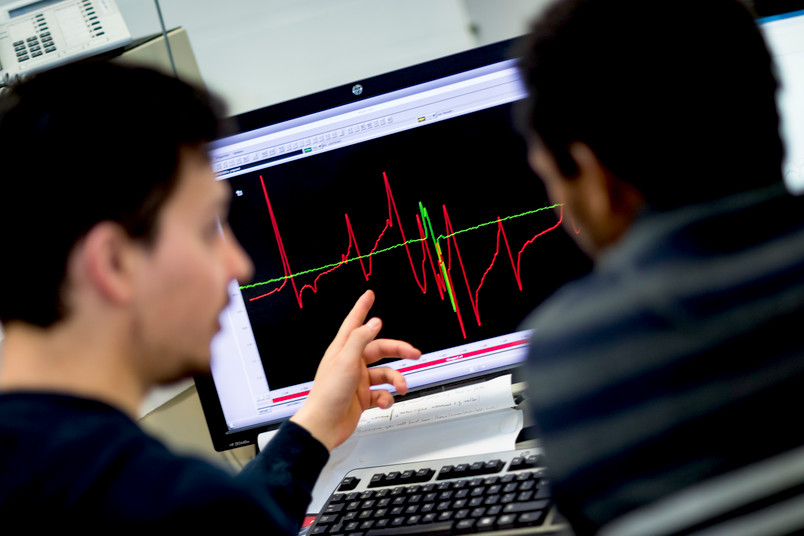 Interpreting a spectrum can be laborious work. Every peak must be allocated to a chemical compound using reference data.
© Damian Gorczany

However, Yetsedaw Tsegaw was not able to directly identify hydroxylamine in his sample in this way. This was because the vibrations of other chemical compounds overlapped with the vibrations of hydroxylamine. Only when he gradually warmed the sample and the interfering substances evaporated was he able to identify hydroxylamine. And it was thus clear: in theory, the molecule could form in comet ice. But why had no one been able to detect this substance in space until now?

We will never be able to prove whether life came to Earth via comets.

“I think that people had not been searching for it using the right methods until now,” says Tsegaw. As his experiment showed, hydroxylamine can only be detected with infrared spectroscopy using chemical and mathematical tricks – and they cannot be applied on site in space analyses. He considers other spectroscopic techniques to be promising. If they were to confirm that hydroxylamine actually occurs in comet ice, astrochemists would be a step closer to the question of the origin of life.

“However, we will never be able to prove whether life came to Earth via comets,” expects Wolfram Sander. “We can devise plausible mechanisms and develop models from them, but we cannot ultimately prove the models.” This is because, as the chemist explains, one would have to reproduce the process. “The creation of life occurred over a timescale that we cannot simulate. Even though our research is of fundamental importance, it will not be able to provide a definitive answer to this question.”