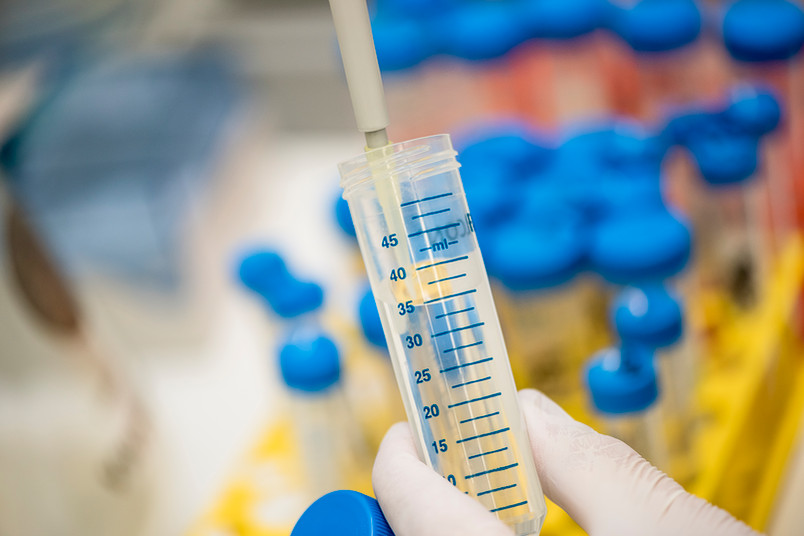 An effective drug against the disease does not yet exist.
© Damian Gorczany
Avoid protein clumping

Computer simulations and experiments with cells have yielded promising results.

Involuntary movements are a prominent symptom of Huntington’s disease. The hereditary disease develops slowly at first, but sooner or later severely impacts those affected and ultimately leads to death. An effective drug does not yet exist.

Researchers from RUB and the University of Duisburg-Essen (UDE) have now discovered a potential therapy approach. The cause of Huntington’s disease is a defect in the huntingtin gene, in which a certain gene sequence occurs repeatedly – too many repetitions trigger the disease. The huntingtin gene contains the blueprint for the protein of the same name. Abnormal huntingtin proteins clump together, and these aggregates have a toxic effect.

UDE researchers Prof Dr Thomas Schrader and Prof Dr Frank-Gerrit Klärner have developed a synthetic molecule that has the potential to become an effective drug. In simulations, Prof Dr Elsa Sánchez-García, also at UDE, showed that the molecule can prevent the clumping of huntingtin. In cooperation with the Bochum-based biochemist Prof Dr Simon Ebbinghaus, she examined the substance in more detail.

It was effective not just in simulations. The substance also reduced the number of abnormal huntingtin aggregates in experiments with living cells. Bochum-based physicians at the St. Josefs Hospital have shown that positive effects on cell cultures are also detectable. The researchers now want to investigate the mode of action in more detail and explore the potential as a drug further.

The teams in Bochum and Duisburg-Essen collaborate within the Cluster of Excellence “Ruhr explores Solvation”.