Decoding the causes of protein misfolding requires different scientific approaches. The expertise of the researchers from Dortmund complements that of researchers from Bochum perfectly.
© Damian Gorczany
Living cells

Chemistry in a small space

There is not much room in cells. The molecules are tightly packed. Does this influence their function? And do experiments have to take this influence into account?

Proteins consist of hundreds of amino acids. So that they can perform their function, they must not only contain the right sequence of amino acids but also be folded into the correct 3D structure. Errors in the spatial arrangement can have devastating consequences. For instance, misfoldings of proteins are presumed to be the cause of neurodegenerative diseases such as Huntington’s disease, Alzheimer’s or Parkinson’s disease. The problem in these cases is that the misfolded proteins clump together and form toxic deposits.

Although the proteins involved are known for a long time, no antidote has yet been found. The processes leading to protein clumps are still not sufficiently understood. The underlying mechanisms are of interest to the teams of Prof Dr Simon Ebbinghaus at Ruhr-Universität Bochum and Prof Dr Roland Winter at TU Dortmund University. Their approach: They do not observe the proteins involved – as usual – only in an aqueous solution, but also in the living cell.

You have to imagine yourself inside an elevator.

Up to 40 percent of the volume of a cell consists of biomolecules. The cell fluid is therefore anything but a dilute solution, it has a viscous consistency. Due to the lack of room inside the cell, the conformations adopted by the proteins differ from those they would adopt if they were not constricted. “You have to imagine yourself inside an elevator or a train full of people,” explains Simon Ebbinghaus of the Bochum Institute of Physical Chemistry II. “When it is full, we keep our arms close to our bodies and try to occupy as little space as possible. The proteins do something similar.”

The Dortmund and Bochum-based researchers want to find out how this so-called crowding effect affects the folding and misfolding of proteins. They cooperate in the Cluster of Excellence “Ruhr explores Solvation” (Resolv), which focuses on the role of the solvent in chemical and biochemical reactions.

Innovative processes are needed for this research. Even simple cells already contain 4,000 different proteins. Methodically, it is therefore a challenge to investigate a particular molecule in this complex environment. One approach is to analyse the target protein in an aqueous solution in the test tube and to add other components that are found in living cells – so-called crowders. But does this adequately mirror the conditions in living organisms? This question was investigated by the Resolv researchers.

During his postdoctoral period in the USA, Simon Ebbinghaus developed a technique that allows the folding processes of individual proteins to be observed directly inside living cells. The trick: Laser pulses trigger small temperature jumps that do not affect the cells but melt the molecules inside. The protein relinquishes its spatial arrangement so that an unfolded amino acid chain is present.

Normally, the spatial structure of all the proteins contained in the cell would dissolve when heated. However, the researchers only want to unfold a certain kind of protein. To achieve this they must pre-treat this particular type. They ensure that the particular protein type is somewhat less stable than the other molecules in the cell, and will thus unfold at lower temperatures. 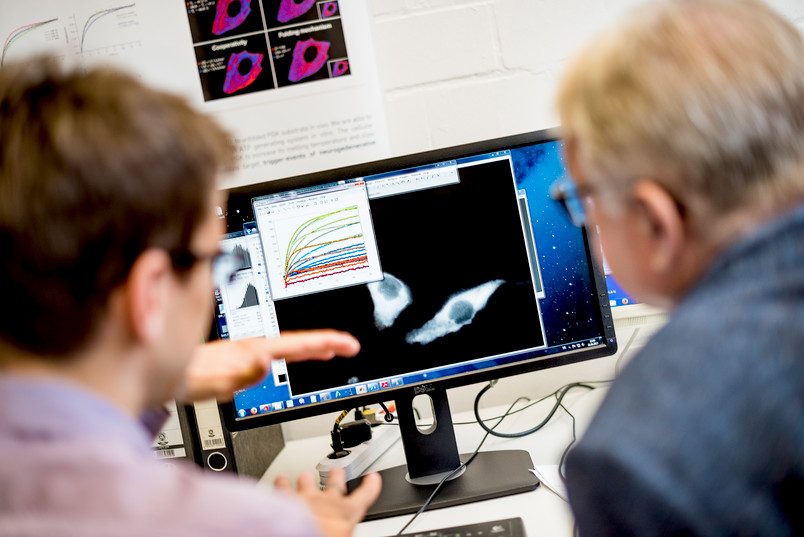 Simon Ebbinghaus has developed a method for monitoring protein folding in living cells. With the expertise of the colleagues from Dortmund the experimental results can be interpreted.
© Damian Gorczany

In order to be able to measure the unfolding process, the chemists introduce a colour marking at both ends of the amino acid chain of the target protein. This helps them observe how the protein changes its spatial structure in the cell. Rather than a video of the molecular changes, the method provides abstract data which must be interpreted. This is only possible if you know exactly how a protein responds to certain influences under controlled conditions. The scientists therefore have to use studies in the test tube for comparison purposes. Roland Winter’s team at the Dortmund Institute of Physical Chemistry I has many years of expertise in this field. The researchers have investigated in many studies how different substances affect the folding process of proteins.

Sum of all molecules is crucial

Together with her colleagues, doctoral student Mimi Gao investigated how certain biomolecules affect the formation of these deposits. The team tested a large variety of substances that are found in living cells, including salts, small soluble molecules, folding aid proteins, also called chaperones, or crowders, which are supposed to recreate the constriction in living cells. The main insight was: It is not enough to look at the effects of individual substances, because they interact with each other. For instance, the effect of crowders in the presence of chaperones differs from when they are alone. The sum of all molecules in the cell thus regulates the folding process. 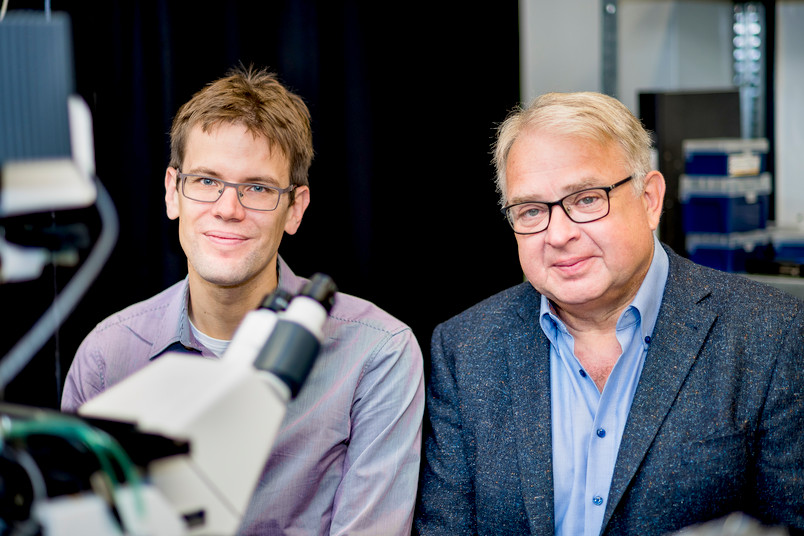 Simon Ebbinghaus (on the left) and Roland Winter (on the right) collaborate in the “Ruhr explores Solvation” cluster of excellence.
© Damian Gorczany

It is however nearly impossible to recreate the conditions in a living cell in a test tube. Although some studies attempt to mimic the crowdedness in the cell by means of artificial additives in the test tube, does this actually reflect realistic conditions? This question was addressed by the Resolv scientists in another study. They compared the behaviour of an RNA structure in a living cell and in a test tube with and without artificial additives. The molecule used had a hairpin-shaped structure that melts at high temperatures. The researchers investigated how RNA stability changed in different scenarios and at different temperatures.

To their surprise, the RNA hairpin behaviour in an aqueous solution without additives was similar to its behaviour in a living cell. However, in the test tube with additives – which would actually be closer to the natural conditions – its behaviour differed significantly. If you really want to understand protein folding and misfolding, there is thus no way of avoiding studies in living cells. For their interpretation however, additional analyses under controlled conditions are indispensable.

The Resolv team would now like to use this combination of methods for the step-by-step investigation of other molecules and scenarios. The groups of Simon Ebbinghaus and Roland Winter are not only interested in how biological processes differ in cell and test tube. They also want to find out how the folding of proteins changes under extreme conditions, such as extreme pressure. Or how the processes change when the cell is under stress, and what strategies the cell develops to counter the stress. Throughout all of this, their long-term goal is to gain new insights into the misfolding of abnormal proteins.