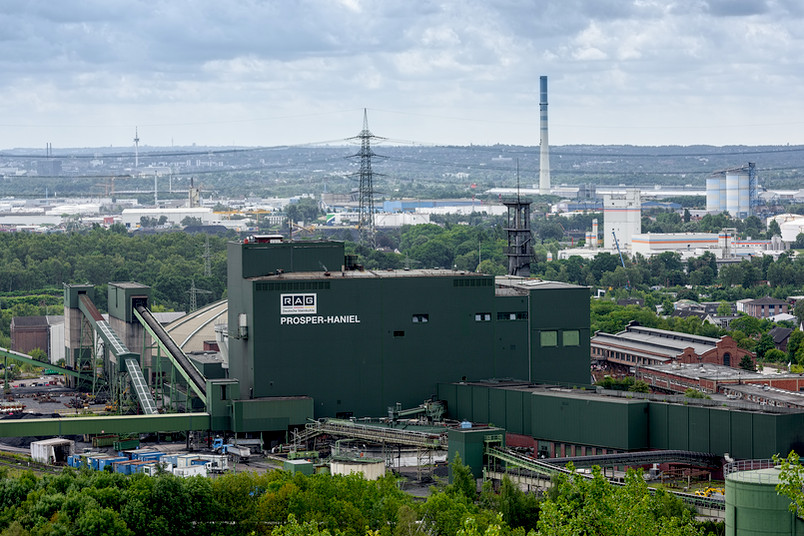 The Prosper-Haniel mine in Bottrop remains in operation until late 2018. Subsequently, the premises might be converted into the first underground pumped-storage power plant in the world.
© Roberto Schirdewahn
Energy research

Cities need electricity – but not continuously while it’s being generated by wind or sun. Engineers study ways of storing excess capacity in a sustainable manner.

Thinking about power demand, we initially assume that there is a lack of electric energy due to scarce resources. In fact, there is also too much: in the recent decades, Germany has been increasingly relying on renewable energies, more specifically on electricity generated by wind power and solar energy. On some summer days, the respective plants produce so much electricity that it exceeds the demand. Obviously there are also seasons, times of day, and weather conditions when wind power and solar power cannot meet the demand. Consequently, storing excess capacity for later use would make a lot of sense. The problem is: there are hardly any suitable storage facilities.

At present, two options are open to us.

Typically, such power plants are located in places where it is possible to connect two lakes at different altitudes, for example a dammed river and an artificial lake on a mountain. When electricity is generated that is not currently needed, it is used to drive pumps that move the water into the lake at the higher altitude. When electricity is needed, the water is released, driving the turbines that generate electric power.
The team headed by Hermann-Josef Wagner, together with the team of Prof Dr André Niemann from the Institute of Hydraulic Engineering and Water Resources Management at the University of Duisburg-Essen, are researching into the feasibility of a pumped-storage power plant underground, the intended location of which is the Prosper-Haniel mine in Bottrop, Germany. It would be the first of its kind worldwide, with an artificial lake above ground and a water storage facility located deep underground, instead of a second lake.

“The mine is an attractive location, because we can use parts of the existing infrastructure,” says Wagner. “Existing tunnels, for example, can be converted into water storage facilities.” The lake above ground would be created on the premises of RAG-Aktiengesellschaft, which already have been considerably altered due to ongoing use over the years, thus making any environmental concerns unlikely. This fact, in turn, would facilitate the approval process. 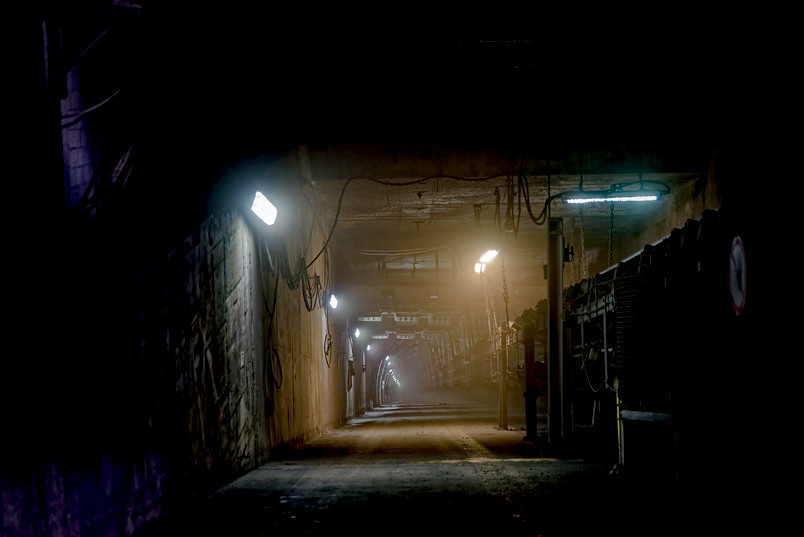 Unlike vertical tunnels, sloping tunnels such as the one pictured above are useful for transporting special equipment underground.
© Roberto Schirdewahn

The Prosper-Haniel mine will remain in operation until late 2018. This, too, is quite convenient, as typically existing tunnels are backfilled shortly after the mine is decommissioned, and are thus rendered unusable. Abandoned mines are therefore generally not suitable for use as storage locations. Another advantage is the fact that, unlike many other mines, the Prosper-Haniel mine has both vertical tunnels and tunnels with a slope of approximately 40 degrees, which can be entered by special vehicles used for transporting machines underground. This is necessary, because the power plant turbines would likewise be installed in the underground caverns.

When exploring the mine’s features during the first project phase that ended in 2015, the researchers realised to their surprise that in many instances it would make more sense commercially to build new structures rather than using existing ones. “For example, it would be less time and cost-consuming to drill a new tunnel, rather than waterproof old tunnels, as we had originally planned,” explains Hermann-Josef Wagner.

Calculations will show if transporting machines via the existing sloping tunnel would be commercially viable; here, too, it might be less expensive to build new ones. “We rely on the expertise of our Austrian project partner, who has built underground power plants before, to provide answers to these questions,” says Wagner.

It emerged in the course of the project that approximately 500 metres would be the ideal depth for the underground water storage facility. Initially, the researchers considered placing it at a depth of 1,000 metres. However, all mining areas have to be protected from rising groundwater continuously while mining operations are carried out and long after they have been discontinued. As proprietor of the Prosper-Haniel mine, RAG already keeps the area free of groundwater to a depth of 500 metres; thus, the pumped-storage power plant would operate in a dry environment rather than in a water-free bubble that would be created at a depth of 1,000 metres.

The lake above ground, which according to the researchers’ calculations should hold at least 600,000 cubic metres of water, is still being analysed with regard to different aspects: what kind of organisms would settle there? How deep should it be? Can it be set up in the shadow of the spoil tip so that it remains an inconspicuous element of the landscape? 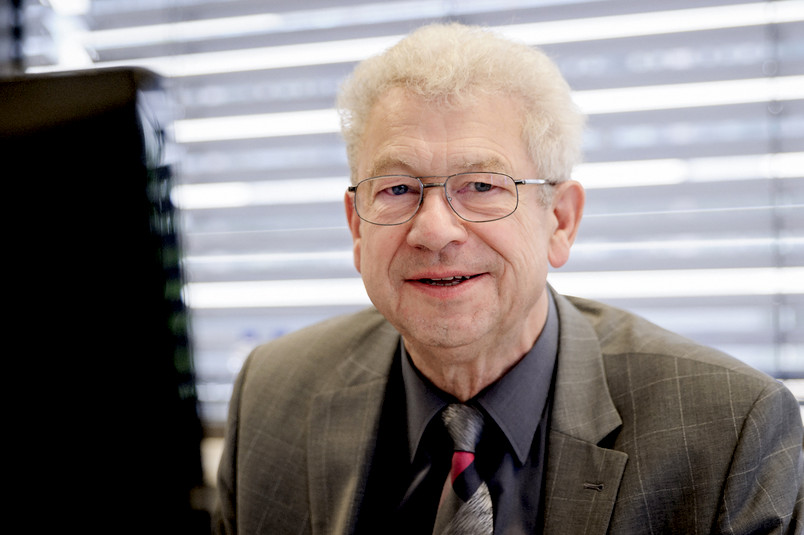 The pumped-storage power plant in the Prosper-Haniel mine has the potential to become a huge attraction, as Hermann-Josef Wagner predicts.
© Roberto Schirdewahn

The latter aspect might affect the levels of acceptance of the pumped-storage power plant among the population, which is likewise being investigated as part of the project. Initial results have shown: 80 per cent of the survey participants living in the surroundings of the Prosper-Haniel mine are in favour of renewable energies, and the same percentage wish for the mine to be used for recreational and cultural purposes after decommissioning. Moreover, 63.7 per cent of interviewed residents would like industry, trade or energy suppliers to settle down at the premises, while less than one third of the survey participants are familiar with the concept of underground pumped-storage power plants.

In the current second project phase, the researchers plan to interview more people, for example local representatives in the region who influence public opinion.

In the meantime, the engineers are addressing another question: how is the power plant to be laid out? Approximately 40 cubic metres of water per second have to stream through the turbines in order to generate electricity at a competitive market price. Which type of turbine is best suited?

The list includes, for example, so-called Francis turbines that generate electricity when water passes through them downwards and that are also capable of transporting water upwards. Another option are turbines that are deployed solely for the generation of electricity, used in combination with pumps that would have to be installed separately. It is a question of costs, as well as of flexibility. Francis turbines take slightly longer to switch from upward to downward mode and vice versa.

The problem is that electricity is currently so cheap in the market that nobody invests in storage technologies.

As the economical and operating requirements for the electricity storage in the future are not know today, the researchers use various scenarios for their calculations to ensure that the decision in favour or against the construction will be based on a solid data foundation. “The problem is that electricity is currently so cheap in the market that nobody invests in storage technologies,” explains Wagner. One reason is the fact that many old coal power plants that are still in operation are already written off, which means that they can keep the costs of one kilowatt hour of electricity very low. “This is of course about to change – things will look quite differently in six or seven years’ time,” Wagner continues. “But as nobody can foresee in what way battery technology will develop, it’s impossible to say if investments in this field will pay off. This is where policies come into play.” Consequently, a crucial task in the current second project phase is identifying and approaching potential pumped-storage power plant operators.

Hermann-Josef Wagner hopes that the underground pumped-storage power plant is going to be built on the premises of the Prosper-Haniel mine. If only because it would be the first one worldwide – “a massive attraction,” as he says. Quite a few interested parties have been in touch, including investors from China.

The parties involved in the project “Feasibility of post-mining land use through an underground pumped-storage power plant in the Prosper-Haniel mine in Bottrop – Phase 2” include the Institute of Hydraulic Engineering and Water Resources Management as well as Geology at the University of Duisburg-Essen, the Rhine Ruhr Institute for Social Research and Policy Consulting, the Chair of Energy Systems and Energy Economics at Ruhr-Universität Bochum, RAG-Aktiengesellschaft, the DMT Group, and the Austrian engineering office ILF. The project will be funded by the Ministry for Environment, Agriculture, Conservation and Consumer Protection of the State of North Rhine-Westphalia and by the Federal Ministry for Economic Affairs and Energy until the end of 2017.