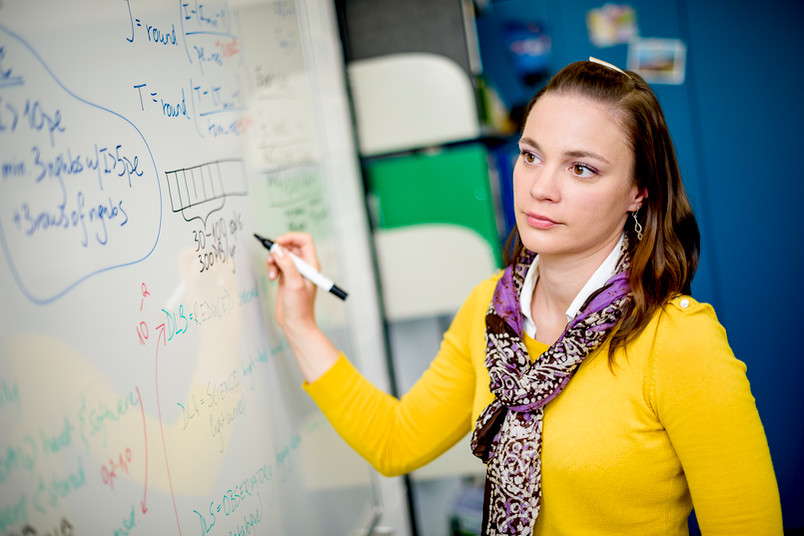 Lenka Tomankova participates in the development of the real-time analysis for the Cherenkov Telescope Array.
© Damian Gorczany
Astrophysics

Ambassadors from the most violent places in the universe

Cosmic radiation originates under the most extreme conditions that space has to offer. However, researchers do not know much about it yet. A new telescope facility is about to change that.

The Earth is incessantly pelted by high-energy particles from space. This cosmic radiation originates during powerful energy eruptions in the universe, where particles are accelerated and catapulted through space. They transport messages from extreme spaces in the universe. But even though they are omnipresent, researchers do not know much about them.

Where does high-energy cosmic radiation originate? What can we learn about its sources? These and other questions are studied by a research consortium with more than 1,000 members. They monitor the construction of a new telescope facility that is scheduled to be built in La Palma and in Chile: the Cherenkov Telescope Array, short CTA.

Members of the consortium include the teams of Prof Dr Julia Tjus from the Ruhr-Universität Bochum and Prof Dr Wolfgang Rhode from the Technical University of Dortmund. Both groups collaborate in the Ruhr Astroparticle and Plasma Physics Center, preparing the ground for the construction of CTA. The telescope facility is designed to capture high-energy gamma radiation from space.

Gamma particles are simply photons, i.e. quanta of light. But their energy is ten trillion times greater than that of visible light. When the gamma particles interact in the atmosphere of the earth, this causes a very weak flash that lasts for a mere one billionth of a second and is not visible to the naked eye. Special detectors are required for this purpose – such as will be installed in the CTA.

The array is projected to include over 100 telescopes in the northern and southern hemispheres in total that are designed to capture high-energy gamma rays much more accurately than the telescopes in operation to date. Researchers are hoping to thus gain insights into the sources of cosmic radiation. 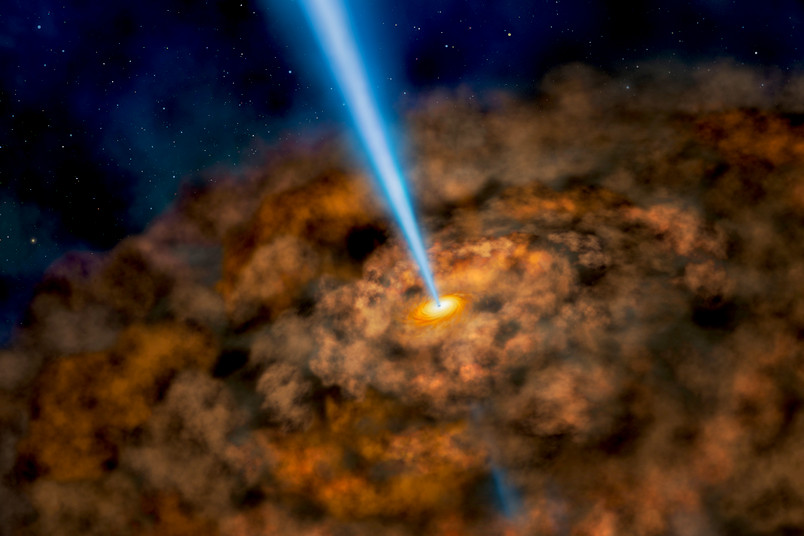 Astronomers assume that there is a supermassive black hole in the centre of every large galaxy. When gas hits the black hole, matter is accelerated and heated. In the process, large jets of hot matter are often emitted. These active galactic nuclei might be a source of cosmic radiation.
© NASA SOFIA, Lynette Cook

As gamma particles are not charged, unlike some other components of cosmic radiation, they are not deflected by magnetic fields on their journey through space. They fly in more or less straight paths through the universe. Researchers can determine the direction they came from, thus gaining insights into their origins. Different phenomena might conceivably qualify as origins of cosmic radiation, for example black holes or the remnants of stellar explosions. The CTA team intends to not only find out where the high-energy particles come from, but also to learn about the physical processes in the sources.

In order to ensure that the CTA telescopes will be able to perform their tasks as efficiently as possible, the consortium has been preparing the ground for the construction of the facility for ten years. If all goes to plan, the first telescopes will be set up in summer 2018. Once up and running, they will record huge data volumes, some of which will be analysed on site. The algorithms for this real-time analysis are being developed by the teams from Bochum and Dortmund. 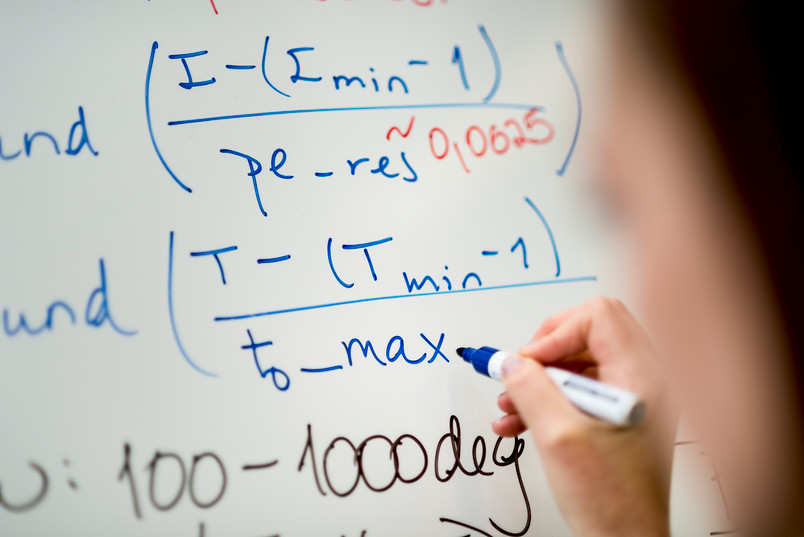 The universe in algorithms: quick and efficient data processing is indispensable in order to identify brief energy bursts of gamma sources in real time.
© Damian Gorczany

The analyses will enable CTA to efficiently collaborate with other observatories. Telescopes in different locations worldwide are specialised in particles with different energies and, consequently, can compile different information about the same source. In the process, the observatories inform each other when and where something interesting is going on.

“Gamma sources can alter their behaviour suddenly and unexpectedly,” says Dr Lenka Tomankova, researcher at the Chair for Plasma Astroparticle Physics in Bochum. This can happen within seconds or minutes. To ensure that no changes will be missed, the CTA team intends to analyse the recorded data continuously in real time. “Rather than high precision, speed is our priority,” explains Tomankova. “The moment we realise that something interesting is happening, we inform other observatories.”

As CTA will be ten times as sensitive as existing observatories, it will be able to locate new sources, in addition to providing unique, detailed observations of known sources. “It’s possible that we will have directed our telescopes at a known gamma source and that the real-time analysis will reveal other exciting things that are going on in our field of view,” elaborates Tomankova. “For example that we’ve discovered a new source or a flaring object, i.e. a brief, massive energy burst.”

In developing the algorithms for this purpose, Lenka Tomankova draws on the long-time experience in gamma source modelling gathered by the astroparticle physicists from Bochum – an area of expertise shared by Julia Tjus and Bochum-based physicist Prof Dr Reinhard Schlickeiser. For the models, they developed analytical and numerical solutions of mathematical equations that describe the movement of accelerated particles from their place of origin through cosmic magnetic fields. By including such models in the real-time analysis, measured signals can be used to draw early conclusions regarding the potential sources and identify changes in their behaviour.

The project partners from Dortmund chose a starting point that is a step ahead of the analysis done in Bochum, namely the hardware and the data stream. As a member of Wolfgang Rhode’s team, Dr Dominik Elsässer developed efficient algorithms for resource-friendly data analysis. “The telescopes on La Palma are located 2,500 metres above sea level,” he explains. “It is impossible to lay thick electric cables there, and there are only limited cooling facilities.”

Consequently, CTA operation must not be too energy-consuming. The researchers intend to be able to determine which data are relevant and which can be rejected at an early stage. In collaboration with IT engineers from Dortmund, the astroparticle physicists develop intelligent algorithms to keep the data flood in check.

Dominik Elsässer, Alina Esfahani (on the left) and Alicia Fattorini (on the right) with a technical model of a gamma radiation telescope
© Kai Brügge

The team headed by Wolfgang Rhode in his capacity as chair of department has been studying the astronomy of gamma sources for a long time; it has, for example, been involved in the development of novel detectors and the precursor telescope MAGIC – short for Major Atmospheric Gamma Imaging Cherenkov – on La Palma. Moreover, the groups from Dortmund and Bochum take part in the “Ice Cube” project in Antarctica, where a giant detector submerged into ice is likewise scanning for sources of cosmic radiation.

If I had to place a bet on the origins of extremely high-energy radiation, I’d say active galactic nuclei.

“We have been successfully narrowing down the search for potential sources in the recent years,” says Dominik Elsässer. “If I had to place a bet on the origins of extremely high-energy radiation, I’d say active galactic nuclei.” They are supermassive black holes in the centres of galaxies that accrete matter and emit huge amounts of radiation. Supernova remnants, namely remains of stellar explosions, likewise appear to be sources of cosmic radiation; however, according to theoretical considerations, the energies they attain are not as high as those of active galactic nuclei.

The Cherenkov Telescope Array is expected to solve the mystery of the origins of cosmic radiation – and provide new insights into the high-energy universe.

Astrophysics in the Ruhr region

At the Ruhr Astroparticle and Plasma Physics Center, 100 University Alliance researchers are studying the intersection of astrophysics, plasma physics and particle physics. The Center was inaugurated in September 2016. Julia Tjus and Wolfgang Rhode are among its founding members. The Center members collaborate with each other in many different constellations. Wolfgang Rhode, for example, has joined forces with Bochum-based researcher Prof Dr Ralf Jürgen Dettmar in the field of radio astronomy, with the aim of processing and storing data in a speedier and more compact manner. Studies into the formation of planets, where cosmic radiation plays a crucial role, is the field where the department of Prof Dr Gerhard Wurm at the University of Duisburg-Essen comes into play.