It takes farmers only a minute to check if their field needs fertilising – and if so, with what.

Does the crop need fertilising? This question is of immense importance to farmers, especially in phases when the plants are growing fast. If the soil lacks nutrients such as nitrate or phosphate, the harvest yields go down. As a result, many farmers fertilise more than necessary, in order to prevent potential nutrient deficits. The consequence is over-fertilisation, which is harmful to the environment and pollutes drinking water. This is because non-absorbed fertilisers get washed off by rain and contaminate lakes and rivers.

The green of a plant isn’t really indicative of anything.

In order to apply fertiliser where and when it is needed, some farmers analyse the green of the leaves. Tables and apps are available for this purpose, some of which are supplied by the fertiliser industry. “But the green of a plant isn’t really indicative of anything. If a plant is not green enough, it might be a symptom of anything, including water deficiency,” explains Prof Dr Nicolas Plumeré, head of the research group Molecular Nanostructures at the Center for Electrochemical Sciences at RUB and member of the cluster of excellence Ruhr explores Solvation (Resolv).

For 15 years, he has been researching into techniques that enable farmers to check directly in the field if their crops have any deficiency what that deficiency is. “Lab tests would provide an answer to this question, of course,” he says. But this is an expensive process, and it takes approximately one week – by which time it might be too late to fertilise, because plants require most nutrients in their growth phase. Lab tests are time-consuming: the samples have to be prepared, the temperature has to be precisely controlled, atmospheric oxygen has to be kept out for the duration of the analysis, and the dilution ratio has to be controlled in order to ensure precise results.

The researchers in Plumeré’s team have chosen a different approach: they asked themselves if the analyses couldn’t be carried out by the farmers directly in the field, rather than by professional technicians in the lab. In order to put this idea into practice, they prioritised different aspects: the main thing was to ensure that the farmer cannot make any mistakes and that the results for each individual nutrient can be read straightaway. The farmer wants to know what type of fertiliser he has to use in the field, in what quantity and at what time in order to optimise his harvest yield.

The team developed a test for nitrate that is based on a principle not unlike blood sugar monitoring in diabetes patients: a drop of plant juice is squeezed out of the leaf and applied to a test strip. That strip interfaces with a meter that is connected to the farmer’s smartphone. A short time later, an App will indicate what type of fertilisation is required.

The centrepiece is a plant protein

The test strip, which is smaller than a Euro coin and is supposed to cost even less, still contains a fully equipped lab. The sample volume contains a few microlitres of plant fluid. The centrepiece of the strip is a plant protein that converts nitrate, the so-called nitrate reductase. It adds two electrons to each nitrate. The test begins once the farmer has entered the test strip into the meter and electrons become available. It ends when the entire nitrate in the sample has been supplied with electrons and the electrical current flow stops.

By counting how many electrons have flown during analysis, the number of nitrate molecules in the sample can be calculated. “Under normal circumstances, the analysis should yield a result within approximately one minute, advising the farmer if he should add nitrate or not,” explains Dr Tobias Vöpel from the research group.

The advantage of nitrate reductase is that it reacts only with nitrate and isn’t sensitive to anything else. But: any contact with ambient air has to be eliminated for the reaction to be performed correctly, because the electrode would otherwise transfer the electrons meant for the nitrate to oxygen – thus interfering with the analysis result. Therefore, the test strip contains an additional enzyme that removes oxygen. 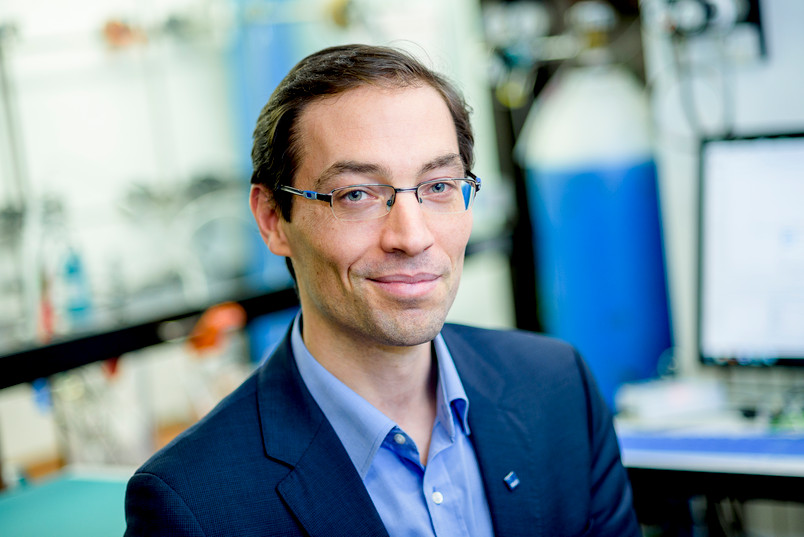 Nicolas Plumeré has been researching into sensors that farmers can use directly in the field for 15 years.
© Damian Gorczany

The researchers submitted the design of the chip embedded in the test strip to a company that prints the chip in several layers. To a carrier layer made up of carbon and a gold electrode, a layer of a specific polymer is applied, which serves as the interface between the metal and the nitrate reductase on top of it. Subsequently, the sensor is filled with plant juice, and it is not necessary for the farmer to measure the sample precisely or dilute it. Thus, even untrained users can perform a precise analysis with ease. Chemist, biochemists and engineers were involved in the development of this high-tech miniature lab.

Nobody likes having to rely on their feeling alone.

In 2018, the nitrate sensor will be translated into marketable applications in a Proof-of-Concept project of the European Research Council. Its application range is much broader than merely providing fertilisation recommendation for individual users: by transferring the data measured by many farmers into a cloud, nitrate maps for entire regions can be created. The sensor can moreover be linked to weather and satellite data, thus facilitating prognoses of nitrate requirements, which farmers can access via a smartphone app. A number of industrial partners are already on board.

In the future, the researchers intend to integrate analyses for different nutrients in one sensor. “This is because the correct mixture of fertilisers is the key,” explains Nicolas Plumeré. Farmers, as he learned in the course of field studies, have long been waiting for an aid like that. “Nobody likes having to rely on their feeling alone.”