Modern radio telescopes unearth structures that nobody has ever expected.

A fine wire, often barely discernible, is the only part of the radio telescopes used for observing the sky in Jülich that is visible above ground. There are no impressive bowls – just metal threads arranged in the shape of pyramids and located in a meadow. “These are perfectly ordinary wires, such as are also used as antennas in radios,” explains Prof Dr Ralf-Jürgen Dettmar, whose team was involved in the construction of the Lofar radio telescope network, short for Low Frequency Array, at the research centre Forschungszentrum Jülich. Astronomers utilise them to capture radio emissions from remote galaxies. Jülich is one of many European locations that feed data into a shared network, the centre of which is situated in the Dutch town of Groningen.

Even though the telescope antennas may seem unremarkable at first glance, they are part of a high-tech system. “Today, all data are digitalised, which is why combining and correlating signals supplied by several antennas is easily done,” explains Ralf-Jürgen Dettmar, who heads the RUB Chair of Astronomy. “We have thus pushed the envelope in terms of the things that we can observe.”

This is because modern technology enables researchers to record data at greater sensitivity and from a broader frequency band than it had been possible in the pre-digital era, when small cables were all that was available to establish connections within a network. Moreover, this approach yields a greater data output than hitherto. “We now have 1,024 or 2,048 reading points or more in instances where we used to have only one,” elaborates Dettmar. 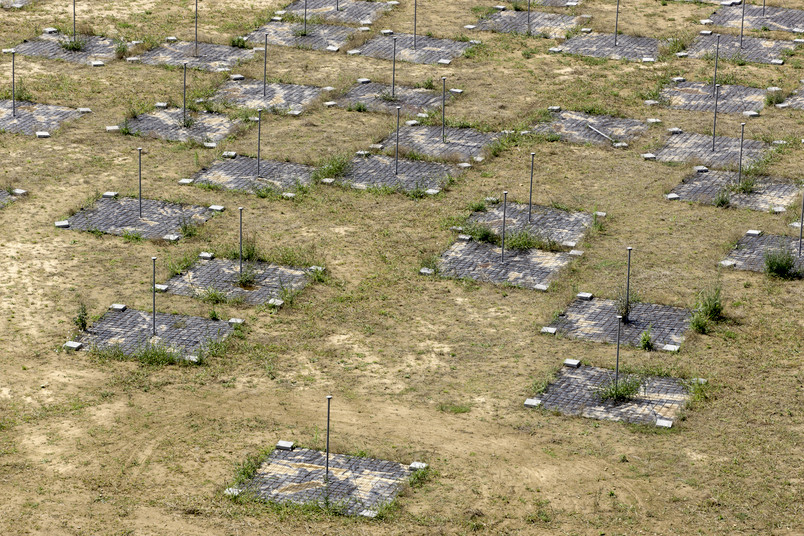 The Lofar facility in Jülich might not have large bowls, but it nevertheless constitutes a powerful telescope. With thin wires leading diagonally from a central rod to the ground, the facility captures radio emissions from space.
© Forschungszentrum Jülich

All new radio telescopes are based on digital technology. The RUB group is involved in various large-scale research projects worldwide, developing novel methods for data analysis and researching into specific cosmic phenomena, such as galactic magnetic fields that can be analysed indirectly with the aid of radio telescopes.

The radio emissions are caused by the following mechanism: free electrons are accelerated in giant stellar explosions and, because of their charge, perform rapid precession in the cosmic magnetic field. In the process, they emit radiation at radio wave frequencies. As the precession is linked to the magnetic field, the emissions contain information on the magnetic field itself. Point by point, the telescopes record an image of spectral radiance in a specific cosmic region, enabling the researchers to calculate the strength and direction of the magnetic field based on the radio signals.

It had previously been assumed that the magnetic fields are trapped in the disc.

Using this method, Ralf-Jürgen Dettmar’s team has compiled new information on galactic magnetic fields. “Galaxies such as our Milky Way are relatively flat objects, which we should picture as discs,” he describes. “It had previously been assumed that the magnetic fields are trapped in the disc.” However, the astronomers from Bochum have proved that this is not the case. 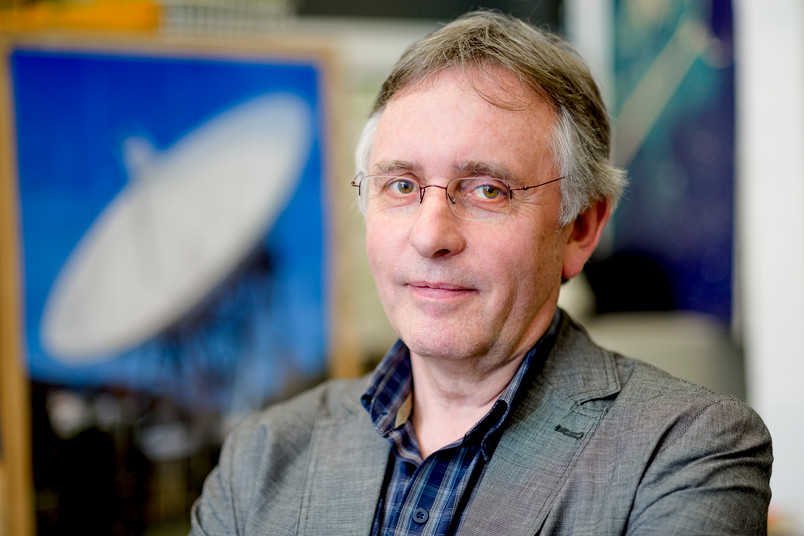 Considering the origins of magnetic fields, this comes as a surprise. They are generated through the turbulent process of stellar explosions. Stars in a galaxy perish in supernovas again and again, and the effects of such explosions last for millions of years. The energy bursts of all supernovas put together produce a galaxy’s magnetic fields. The researches were astonished that a process as chaotic as that results in a magnetic field that is orderly on a large scale. The underlying mechanisms have not yet been fully understood.

By no means an isolated case

In the first step, the Bochum-based astronomers had to demonstrate that what they’d observed was not an isolated case. “Seeing as measuring techniques have been considerably optimised in the wake of digitalisation, we were able to perform larger spot checks,” says Ralf-Jürgen Dettmar. On their first attempt, the researchers were unable to analyse more than three galaxies. Today, they have data of 40 galaxies at their disposal, which have been recorded by a telescope in North America over a period of 400 hours. The records were gathered in 2011 and 2012; now, more than five years later, the analyses have yielded first results.

“Following the digitalisation process, so much data has been accumulated that we required appropriate equipment to be able to handle it at all,” relates Dettmar. Old analysis methods were no longer sufficient; new algorithms became necessary, in order to process the large data volumes and calculate the intensity and direction of magnetic fields. 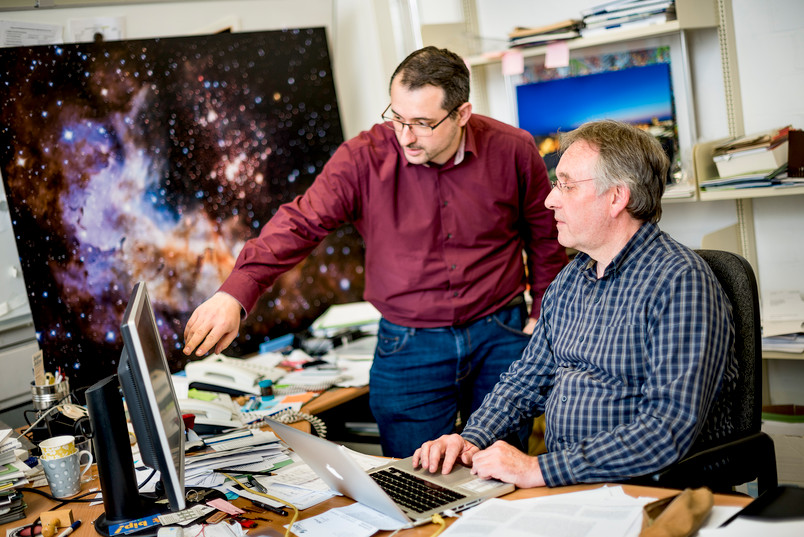 Dr Arpad Miskolczi and Prof Dr Ralf-Jürgen Dettmar discuss novel measurements of magnetic fields in galaxies that resemble our Milky Way, which have been gathered with the aid of the Lofar telescope. Miskolczi is, in addition, in charge of the technology deployed in the RUB’s Lofar station at Forschungszentrum Jülich.
© Damian Gorczany

Almost all analysed galaxies show a large-scale magnetic field; there are, however, a few outliers where no such structures can be discerned. Furthermore, the structure is not identical in all galaxies. “For now we can only speculate about the reasons of this phenomenon,” says Dettmar. “It might have something to do with the type of the respective galaxy. But we don’t know that yet.” He and his research team will continue to investigate this question, as well as several other mysteries associated with cosmic magnetic fields.

A question of sensitivity

The size of the magnetic field surrounding a galaxy, for example, is still unclear. “We haven’t yet spotted an edge,” explains Dettmar. The greater the distance to the galaxy, the weaker the magnetic field – consequently, observing it becomes increasingly difficult. The longer the astronomers point their telescopes at the magnetic field, the more sensitive the measurement becomes, because the signals are integrated over time. This means: when researchers observe a galaxy over a long period of time, they see larger magnetic fields, because they are able to detect the weaker regions, too. So far, they have not identified an end.

This is about the limit of what we can do.

Dettmar hopes that the technology will one day be sensitive enough to figure out the nature of intergalactic magnetic fields. “According to some theories, the intergalactic medium is suffused with magnetic fields, but they must be considerably weaker than the galactic fields,” he says. “We cannot observe them directly as yet; this is about the limit of what we can do.”

Intersection with other disciplines

A detailed understanding of magnetic fields in space might help fathom other cosmic phenomena, including the question how matter spreads across galaxies the way we observe today, or what are the sources of cosmic radiation.

Such questions at the intersection of several disciplines are investigated by researchers at the Ruhr Astroparticle Plasma Physics Center, of which Ralf-Jürgen Dettmar is also a member. The institution is home to 100 scientists from all across the Ruhr area who research into astrophysics, particle physics, and plasma physics. With joined forces, they intend to find answers to questions that one discipline alone is unable to solve.

The team headed by Ralf-Jürgen Dettmar is involved in various radio astronomy projects worldwide, including the construction of the largest projected radio telescope on Earth. Unlike the Lofar facility in Jülich, the so-called Square Kilometre Array in South Africa and Australia will also accommodate radio telescopes in the shape of large bowls. Funded by the Federal Ministry of Education and Research, the Bochum-based researchers develop novel methods for analysing data that the Square Kilometre Array will be generating in future.