One day, this technology might help verify if countries abide by disarmament treaties.

Even though the Cold War has long been over, an estimated 14,550 atomic warheads still exist around the world. This number might be lower than it was at the peak of nuclear armament, when there were five times as many nuclear weapons, but on the other hand modern systems have a destructive force that is 1,000 times as high as that of the Hiroshima bomb.

Experts distinguish between high-alert nuclear weapons that are mounted to intercontinental missiles or bombers and can be launched in an instant, and weapons stored in silos or containers. The challenge lies in monitoring the number of the latter. Here, a technology might help, which is currently being developed by researchers at Horst Görtz Institute for IT Security (HGI) in Bochum.

According to estimates by the Federation of American Scientists, the USA and Russia each possessed approx. 1,700 launch-ready long-range nuclear missiles in 2017; however, no details on those weapons are available due to the top-secret nature of this information.

Considering the large number of weapons, it is crucial to keep these two superpowers in balance. In order to ensure power balance and to agree on disarmament treaties, both sides must know if the respective other country adheres to the agreement. “Monitoring nuclear weapon brings with it technological problems that come as a surprise to laymen,” point out the researchers from Bochum. That’s because it is anything but trivial to monitor something that is top secret.

Construction and composition are supposed to remain secret

On the one hand, nuclear weapons are to be inspected, for example because the respective other party wants to know if a nation is secretly rendering warheads launch-ready that are officially kept in storage. On the other hand, it is important to ensure that as little information about nuclear bombs is released as possible. For the purpose of monitoring nuclear weapons, something that nobody is supposed to see has to be counted.

This is where a project comes in that had originally been developed by HGI researcher Dr Dr Ulrich Rührmair and Princeton University and in which Dr Christian Zenger and Prof Dr Christof Paar from HGI as well as Harvard University have been involved, too. The international team has devised a technology capable of monitoring stored nuclear weapons without revealing any secret information about those weapons and without relying on the hardware on location. 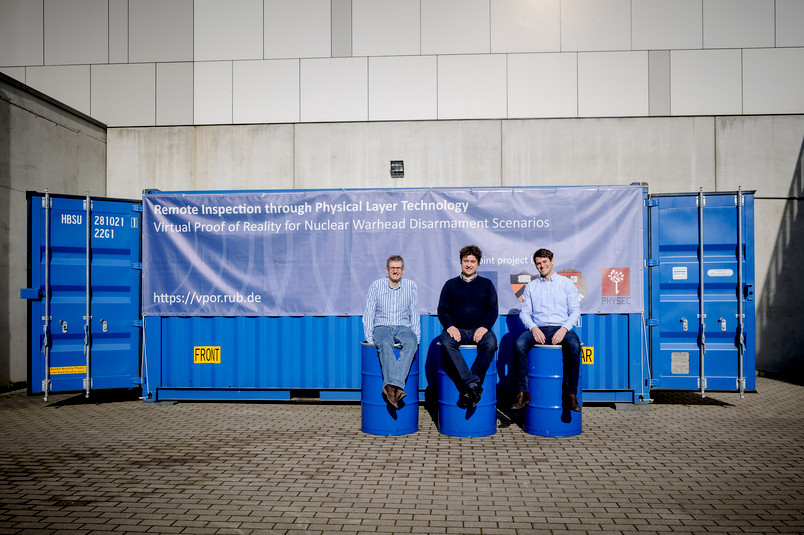 Christof Paar, Ulrich Rührmair and Christian Zenger (from left to right) collaborate with colleagues from Princeton and Harvard University in the nuclear disarmament project.
© Roberto Schirdewahn

“We are only permitted to monitor the surface of the transport containers in which the weapons are kept: that means we can’t take X-ray images or record a bomb’s radioactive signature, because that would tell us something about its composition and construction,” explains Christian Zenger. “It is also pointless to put up cameras in the silo, as the hardware may be easily compromised and the images manipulated.” Nevertheless, it is necessary to have the capability to determine if anything inside the storage facility has been changed, for example if a warhead was secretly removed.

The researchers’ idea is based on so-called Virtual Proofs of Reality, a concept put forward by Rührmair and his colleagues in 2015. The other essential technique is so-called Physical Layer Security, which Christian Zenger has been studying since 2012.

The principle underlying Virtual Proofs of Reality is explained by Ulrich Rührmair: “We gave the question a lot of thought how physical statements between two parties in different locations can be proved via a digital communication channel.” For example: how can a person in Berlin prove to a person in Bochum that the temperature in the capital is 21 degrees centigrade? The concept also applies to far more complicated physical statements than current temperature, e.g. the location of certain objects inside a room. The items in questions can include nuclear weapons in a storage facility.

In order to identify changes in such a storage facility, researchers deploy electromagnetic waves in the radio frequency range. They are transmitted via an antenna and spread through the room. In the process, they are reflected by walls and objects. An antenna captures the returning waves. The IT experts thus compile a radio wave map of the room. Every change – for example if a warhead were to be removed from the storage facility – would change the reflexion pattern and could thus be detected.

This is what it might look like in practice: country A wants to know if the nuclear weapons in country B are stored according to the treaty and are not launch-ready. Both countries must agree to the monitoring system being installed in their storage facilities. Via the Internet, country A could then request the current radio wave map of the storage facility in country B.

The system needs another component to be manipulation-proof. “We must make sure that a country cannot generate a radio wave map of a fully stocked nuclear silo in advance and then continues to send it to country A, even after the weapons had long been removed,” elaborates Ulrich Rührmair. To this end, the researchers have integrated a so-called challenge into the system. 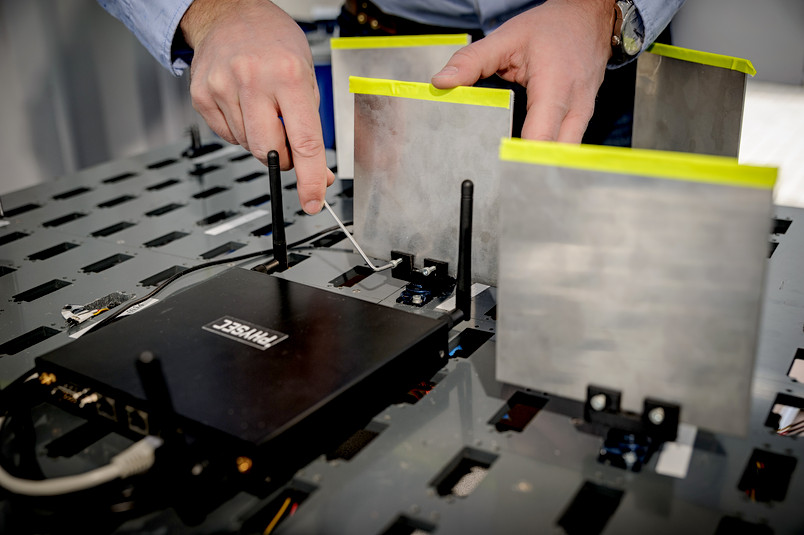 The method can theoretically be deployed to monitor any room, for example a safe or cashpoint.
© Roberto Schirdewahn

In addition to radio wave transmitters and receivers, 20 rotating mirrors are installed in the facility that is to be monitored, which can be remotely adjusted. The mirrors reflect the radio waves, thus changing the reflexion pattern in the room, with each mirror setting creating an individual pattern.

Country A can verify the reply only if the reflexion patterns for a number of different mirror settings were measured and saved when the technology was first implemented. From this pool of mirror settings, country A could then specify one arrangement in each request. If country B sends the correct reflexion pattern back, country A knows that the room has been scanned according to the latest specifications, and is able to verify if any changes have been made.

With 20 mirrors, researchers are currently able to generate 2100 different reflexion rooms; this means, billions of sextillions different combinations of mirror arrangements are possible in this setting. The challenge here is to make sure that the monitored country doesn’t learn to predict the next mirror setting over time. “It is after all conceivable that, after receiving a billion different mirror settings as a challenge, they will identify an algorithm for predicting the next mirror setting,” says Christof Paar. Were this the case, the country could generate the required radio wave map without scanning the room anew – and manipulating the nuclear silo in the meantime.

In order to prevent this scenario, the IT experts from Bochum deploy an unpredictable cryptographic protocol to align the mirrors. “The important thing is to ensure that the correlation between the challenge and the reply cannot be described by a system of linear equation,” says Zenger. “This is because such systems are relatively easy to figure out in mathematical terms.” The same applies to the physics, i.e. the mirror materials: their reflexion properties shouldn’t be linear either.

Security tests in the container

The researchers have set up a container with dummy warheads and mirrors on the RUB campus, testing the Physical Layer Security protocol under simulated real life conditions. They analyse the behaviour of reflexion patterns following changes in the room, for example when dummy warheads are displaced or removed. Moreover, they adapt the algorithms to the size of the room.

The RUB team had conducted initial tests in a tiny system: namely a lunchbox. Thus, they demonstrated the precision of their measurement technology: if they moved an item inside the box by 0.4 micrometres, the movement was flagged by the system.

In this context, it is necessary to prevent false alarm.

It is perhaps not necessary for the method to be quite so precise in operation. “The reason is simple,” says Paar. “In this context, it is necessary to prevent false alarm.” Consequently, the system must be quite robust. The researchers have to take inaccuracies of measurement into account, up to a point, because the mirror setting cannot be controlled with absolute precision. The Bochum-based team is currently fine-tuning these details.

The method that one day might be used for supervising nuclear disarmament can theoretically be deployed to monitor any kind of room, including a safe or cashpoint. Established in 2015 as an HGI spin-off, the start-up company Physec adapts the technology for use in other applications and is deeply involved in the project conducted in collaboration with Alexander Glaser and Sebastien Philippe from Princeton and Boaz Barak from Harvard University.

Together with their US-colleagues, the researchers from Bochum are tinkering with yet another addition to their system. The crucial point is that country A has to record a certain number of mirror settings when the process is launched, in order to be able to verify the replies submitted by country B over time. However, country B does not want country A to set up its measuring equipment in country B’s nuclear silo and to potentially record secret information. Conversely, country A would not trust the measuring equipment used by country B, either. They are at an impasse.

The idea is: both countries build identical rooms with an identical arrangement of nuclear silos. Country A sets up a highly complex and unclonable object, a wallpaper of sort, that reflects radio waves in a unique way and cannot be duplicated. Country A hangs up the wallpaper at a specified location in its own room, records a number of reflexion patterns with certain mirror settings, and sends the wallpaper to country B. Then, country B hangs the object in the exact same location in the room that is to be monitored and starts submitting the room’s reflexion patterns to country A in regular intervals. Country B can correctly reply to the challenge of country A only if it has hung up the unique wallpaper. Country A would be able to verify if the wallpaper is in place during an inspection on location – without using any unauthorised measuring equipment, simply by taking a look into the room. As the wallpaper is unclonable, it would ensure that country B performs the measurements in the silo that has to be monitored, and that no second wallpaper had been hung up in another room which contains dummy warheads.

The researchers are now planning tests to verify if this scenario can be implemented in accordance with the necessary precision and robustness requirements.