The droughts of the past and the future

Dripstones reflect the climate of the past. This hypothesis is substantiated by 500-year-old graffiti.

Many high cultures of the past have faded away at some point. What might have been the reasons of their decline? Researchers have long speculated that climate change might have been one of the causes. In particular, droughts lasting over the period of several years are suspected to have driven entire societies into a crisis.

In order to reconstruct the climate conditions of the past, researchers in the team headed by Dr. Sebastian Breitenbach from the Department of Sediment and Isotope Geology at the Faculty of Geosciences at Ruhr-Universität Bochum make use of stalagmites. These dripstones form gradually in caves as water drops onto the ground. The carbonate dissolved in the water deposits in layers, and stalagmites are thus formed. Depending on the precipitation, the structure and chemical composition of the stalagmites vary.

In China, an international research group has now found evidence indicating how quick stalagmites respond to precipitation changes and how precisely paleoclimate reconstructions can reflect droughts. In Dayu Cave in southern China, inscriptions that are at least 500 years old have been found on the cave walls, describing in detail why the people of the time had entered the cave. This exactly dated historical information provides researchers with the unique opportunity to compare the results of their geochemistry-based climate reconstructions with historical records.

“In Dayu Cave, we analysed a stalagmite located approximately one kilometre from the cave entrance. It represents roughly the time period between 1265 and 1982 and grew about 0.2 millimetres per annum on average, which is quite fast,” explains Sebastian Breitenbach. The geologists’ studies enable them to assess the climate of that period at a resolution of 1.5 years.

In order to draw conclusions about the climate conditions, the researchers also analyse the relationship of stable isotopes of oxygen. The nuclei of these isotopes contain the same number of protons, but different numbers of neutrons. The more neutrons in the nucleus, the greater the weight of the entire atom. The interesting aspect for geologists is the relationship between the heavy 18O and the lighter 16O. This relationship refers to international standards and is indicated as Delta-O-18, or d18O for short. 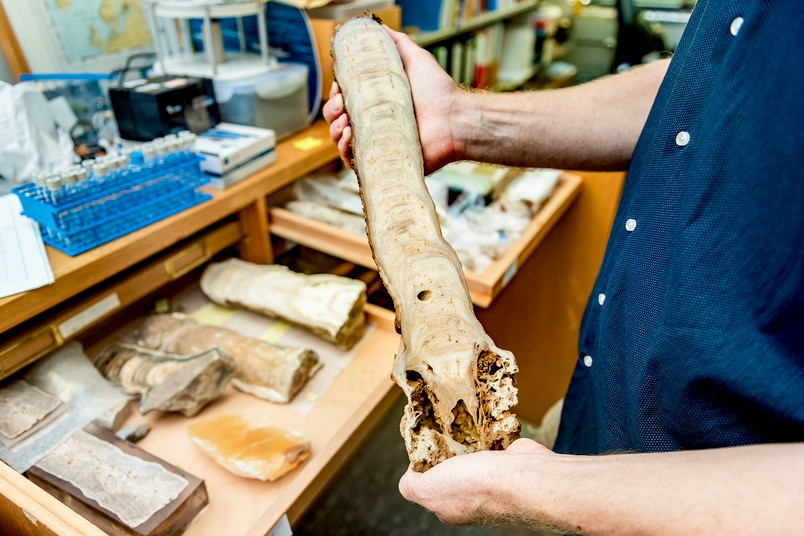 A stalagmite in Sebastian Breitenbach’s archive. The growth layers and the root of the stalagmite that grew on mud are clearly visible, as is a drilling hole that’s required for dating.
© Damian Gorczany

“Central China gets its water from the summer monsoon,” explains Sebastian Breitenbach. “To put it simply: when the rainy season begins in summer, it’s as if the continent inhales. A large low-pressure region forms above the continent, and the moisture from the surrounding oceans is sucked in.”

Depending on the force of the monsoon, the source of the rain is located at a lesser or greater distance in the ocean. Rain clouds cover a greater distance during a strong monsoon with heavy winds than during a weak monsoon. During transport, water is lost through rainfall, and the heavy atoms are the first ones to fall down. Accordingly, the stronger the monsoon and the longer the distance covered by rain clouds, the greater the number of heavy 18O isotopes that disappear along the way. The water that arrives in land-locked country as monsoon rain thus contains relatively high volumes of light 16O, and the d18O value is lower.

Based on the d18O value, the researchers can draw conclusions about the force of the monsoon during a specific period of time. “Unfortunately, interpreting the lower d18O as a strong monsoon signal is not yet very precise,” concedes Sebastian Breitenbach. “For example, the term ‘strong monsoon’, the question if the d18O signal actually only reflects a greater precipitation volume, and the question to what extent the entire process is affected by other factors are not clearly defined.” Rain might merely spread differently during summertime, which would likewise change the d18O value.

Therefore, the validity of d18O had been questioned again and again. Until the inscriptions in the Dayu Cave were found: the graffiti are proof that humans entered the cave at least seven times between 1520 and 1920. The inscriptions on the cave walls provide precise information on when and for what purpose the visits took place: “On 24 May in the 17th year of the Emperor Guangxu period, Quing Dynasty, the local mayor, Huaizong Zhu, led more than 200 people into the cave to get water. A fortune-teller named Zhenrong Ran prayed for rain,” reads one of the inscriptions. The date corresponds with 30 June 1891 in our calendar. Three years later, in 1894, there’s another inscription, according to which the same mayor led 120 to the cave in search of water. 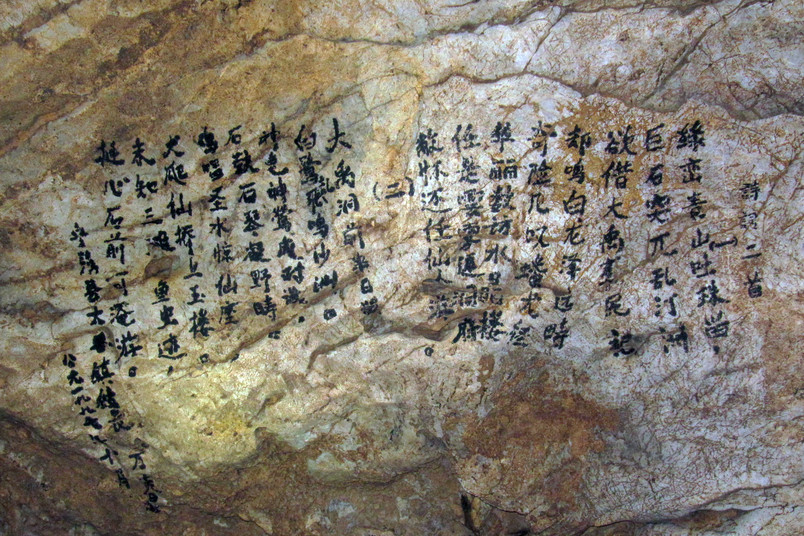 Inscriptions in the Chinese cave give some indication of events that happened hundreds of years ago.
© Liangcheng Tan

“These inscriptions made during seven droughts in total match exactly our conclusions about weak monsoons, which we drew based on the chemical analysis of the stalagmite,” says Sebastian Breitenbach. “For southern China, it is thus true that a higher d18O value indicates a drought. For other regions, the validity of this reading has still to be verified.”

Moreover, the inscriptions in Dayu Cave provide information on the consequences of droughts, including for example starvation and cannibalism. Around the turn of the century, the drought caused conflicts between the government and the local populace. “To ensure the wellbeing of societies, it is therefore crucial to develop strategies for dry periods,” points out Breitenbach. “This is especially relevant in view of the climate change that brings about far-reaching ecological changes.” 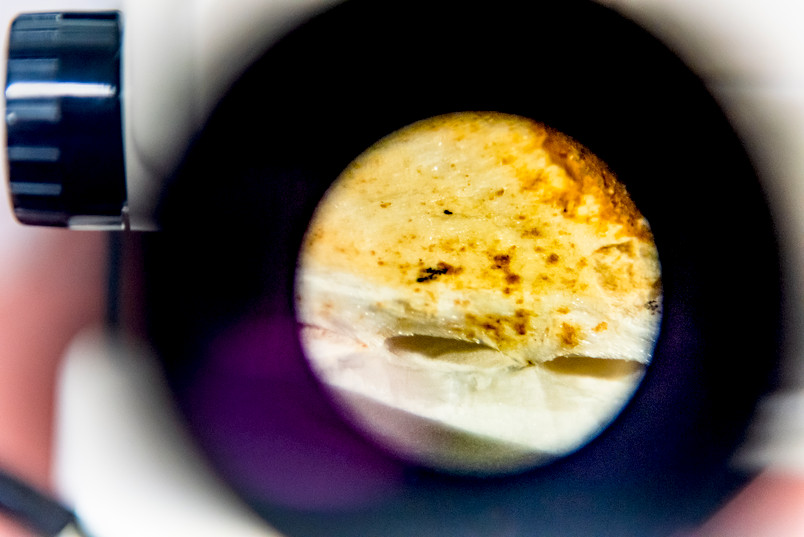 This microscopic image of a stalactite reveals strands of crystal and cavities in the millimetre range.
© Damian Gorczany

Therefore, the geologists went one step further and hazarded a forecast. They applied model calculations for the period between 1982 – where the analysis of the stalagmite ends – to 2042, in order to assess the probability of future droughts.

Farmers should prepare themselves for less reliable monsoon

The results have shown that the volume of rainfall will likely lie below the average of the past 500 years. The researchers calculated two significant droughts: for the 1990s and the late 2030s. The meteorological records of the 1990s confirm a dry period. It remains to be seen if the model will be proved right for the 30s of the 21st century.

“The farmers in southern China should brace themselves for phases with less precipitation and, consequently, altered growth periods with potentially less reliable monsoon,” points out Sebastian Breitenbach.