What sleeps below the woods

Large volumes of century-old carbon are stored in forest soils. It should better stay there.

Not far below the surface of forest soil begins a terrain that is for the most part unexplored. Whereas the processes in the top 30 centimetres of the soil are fairly well understood, the deeper areas of the soil are being studied by a research group headed by Professor Bernd Marschner from the Department of Soil Science and Soil Ecology of the Institute of Geography at the Faculty of Geosciences at Ruhr-Universität Bochum. Here, below the humus layer and above the bedrock, twice as much carbon is stored as in the atmosphere and vegetation put together. It is at the heart of the project that has been funded by the German Research Foundation under the umbrella of the research group Subsom since 2013.

More than fifty per cent of the carbon in the soil is embedded at a depth of more than 30 centimetres below the surface – since when? Is there any life? Does an exchange with the carbon in the atmosphere take place?

In order to answer these questions, researchers from across Germany selected five woodland sites for in-depth tests. “We focus on beech forests near Göttingen and Hannover in Lower Saxony that grow on different types of bedrock,” says Bernd Marschner. The selected soils are typical of the northern hemisphere. 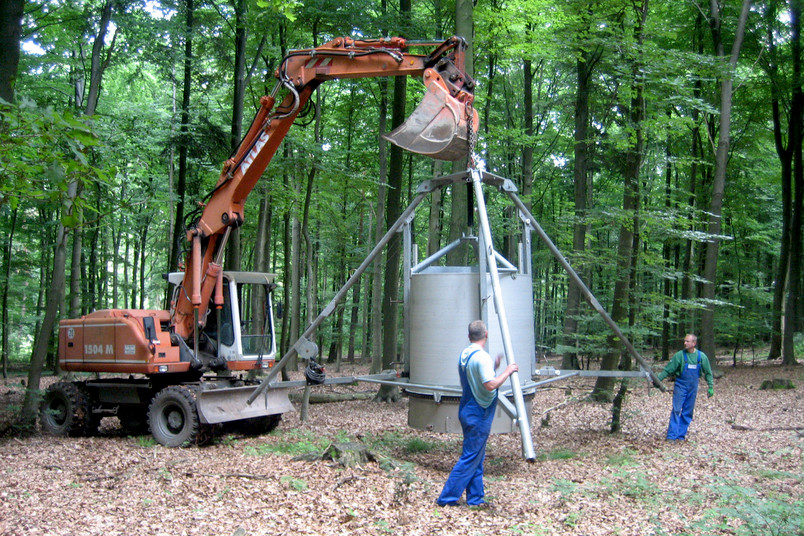 A digger transports the drilling equipment for the observation shafts in the Grinderwald forest.
© Bernd Marschner

In order to gain access to the deep forest soil, the researchers installed shafts with a length of two metres and a diameter of more than one and a half metres, through which a number of different probes have been inserted into the soil. The probes have been deployed since 2013 to identify various parameters, those including the moisture of the soil, the dissolved carbon in the soil solution, and of carbon dioxide (CO2) in the soil gas.

Leaves from the lab

Striving to ascertain how carbon entered the deeper soil layers – referred to by researchers as soil horizons – they took a closer look at the foliage of beech trees. Compared with conifers, these 100-year-old trees have the advantage of shedding their leaves during the seasonal cycle. In autumn, the leaves fall to the ground, where they are decomposed by fungi, bacteria and other soil organisms; in the process, carbon is released. The question remained how much of the carbon contents from the leaves gets into the soil. 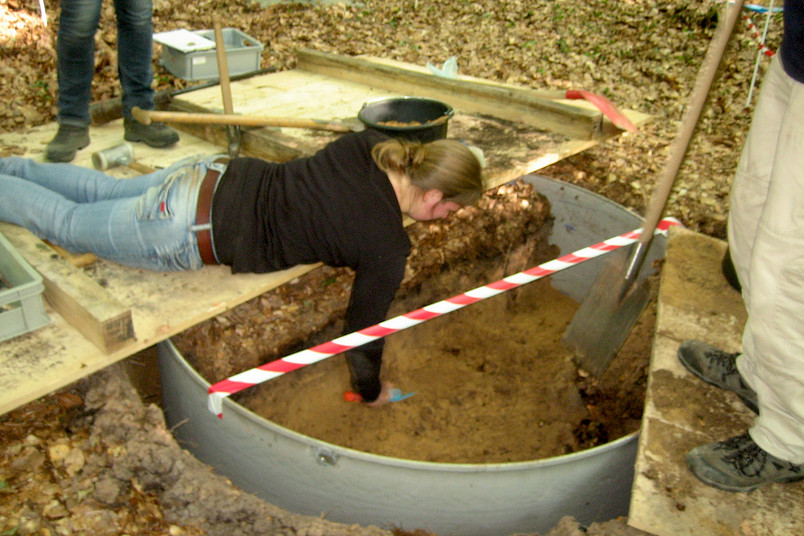 After the steel tube was drilled into the ground, the researchers emptied it by hand. Subsequently, the tube was removed, and synthetic observation shafts were installed.
© Bernd Marschner

Therefore, the researchers had young beech trees treated at a specialised lab with CO2 gas that contained a heavy variety of carbon (13C). The tree leaves absorbed the gas with this marker and got labelled with the same marker in turn. In autumn, the team meticulously removed all beech leaves that had fallen around the measurement shafts and scattered the foliage that had been marked in the lab on the forest soil instead. As a result, the researchers were able to determine how much marked carbon had penetrated how deeply into the soil.

Carbon deep below ground is over 1,000 years old

“To our surprise, we found that less than one per cent of the carbon from the leaves penetrated deeper soil layers,” says Bernd Marschner. “The remaining part decomposed on the surface and entered the atmosphere as CO2.” 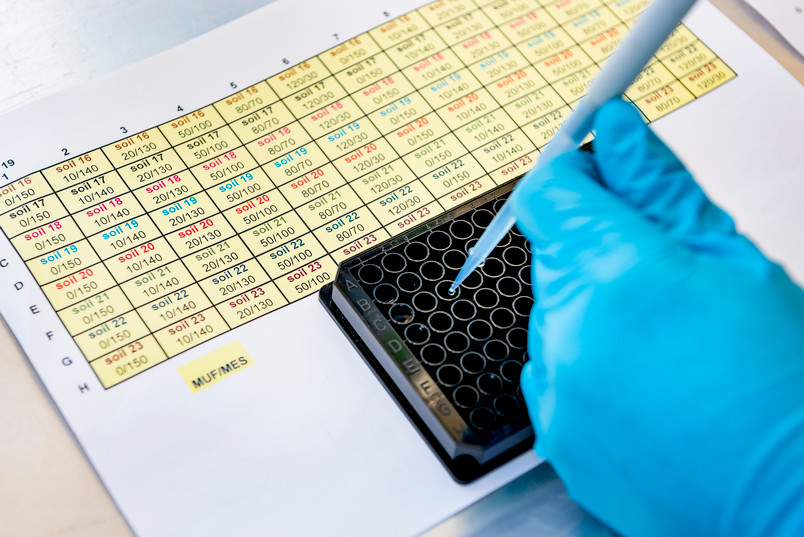 Accordingly, the carbon deep below the surface is very old; at a depth of 50 centimetres and below it’s often older than 1,000 years. More often than not, carbon that has recently entered the soil did so via tree roots, according to the researchers’ observations. “However, roots are coated in a biofilm that absorbs and digests their excretions directly,” explains Marschner. Even dying roots leave behind only small amounts of carbon, as they are instantly metabolised.

The question remains where the old carbon in the soil came from. “We assume it came following chemical weathering that turns bedrock into soil,” says Bernd Marschner. “The strange thing is that the carbon remains pretty much intact, even though it exists in deep soil layers that should be able to digest it,” explains the pedologist. Why is it not metabolised by those organisms?

The team put forward two hypotheses to explain this phenomenon: either the microorganisms are not hungry enough to touch that carbon, or something is lacking that would enable them to feed on it. In order to verify these hypotheses, the researchers launched two experiments. For a starvation experiment, they extracted intact soil and incubated it in the lab for the duration of two years. This was supposed to show if the microorganisms contained in the soil would go for the old carbon at some point, once other, as yet unknown nutritional sources ran dry. 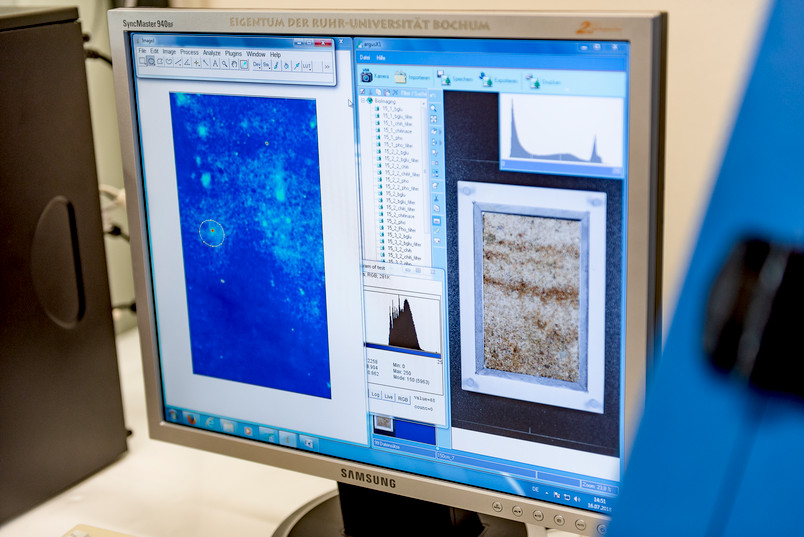 However, the fact that they have access to abundant nutritional sources may not be the reason for the microorganisms’ reluctance; rather, they might be lacking something they need to feed on the old carbon. “Due to a deficiency, they might be in a state of hibernation, so to speak, that enables them to survive for a long time with barely any nutrition,” explains Bernd Marschner.

In order to verify this hypothesis, the research team analysed intact sections of the soil with a thickness of five millimetres to identify metabolic activity. They checked where in the soil, exactly, specific enzymes were active. In the process, they detected such activity only in a few so-called hotspots. The remaining soil presented no metabolic activity.

In the next step, the researchers sprayed the soil sections with a sugar solution. “That’s something that all microorganisms are attracted to and that they digest immediately,” points out Marschner. During the subsequent second analysis of enzyme activity, it emerged that metabolic activity took place almost everywhere in the sample – except in the hotspots that had been previously active. “These findings substantiate our assumption that there’s something lacking that would stimulate the microorganisms' activity,” says Marschner. “Apparently, the organisms in the hotspots don’t require that particular substance, which is why their metabolic activity does not go through the roof once such a substance is provided.”

By conducting follow-up experiments, the pedologists plan to treat such soil sections with other substances to ascertain what – in addition to sugar solution – might lead the microorganisms in the soil to metabolise the old carbon. Substances such as phosphorous and nitrogen, which are the ingredients of many fertilisers, are of particular interest in this context. Such elements often penetrate soils due to overfertilisation. 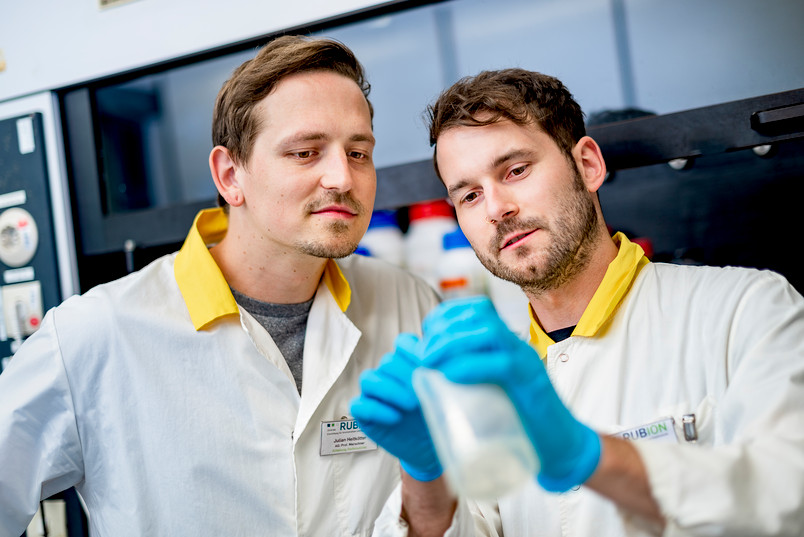 Dr. Julian Heitkötter (on the left) and Michael Herre in the laboratory
© Damian Gorczany

“This question is particularly relevant, because we wish to prevent the old carbon that is stored in the soil from being metabolised and entering the atmosphere as CO2,” elaborates Bernd Marschner. “As a greenhouse gas, CO2 would fuel climate change to a considerable degree.”