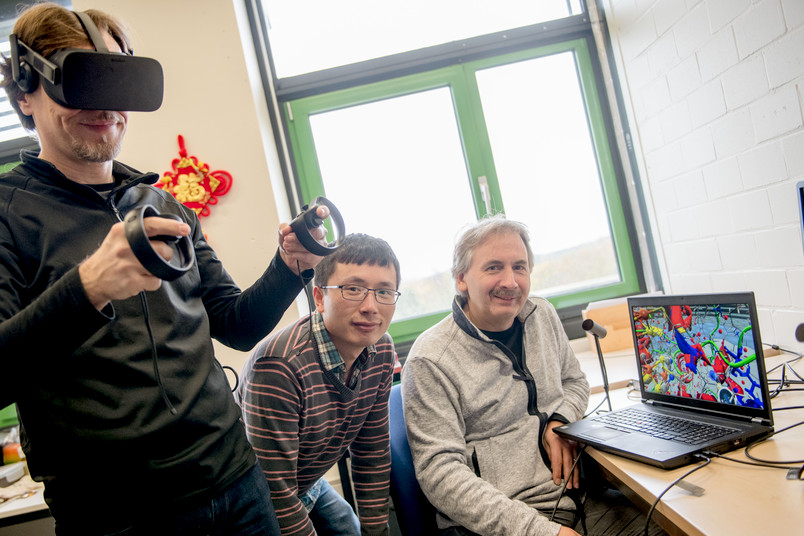 Martin Winkler, Jifu Duan und Thomas Happe (from the left) traced the pathway of protons all the way into the active center of hydrogenases.
© RUB, Marquard
Biology

Fully identified: The pathway of protons

The question how certain algal enzymes accomplish the high proton transfer rate for hydrogen production had in the past been subject to speculation. Dr. Martin Winkler, Dr. Jifu Duan, Professor Eckhard Hofmann and Professor Thomas Happe from Ruhr-Universität Bochum (RUB), together with colleagues from Freie Universität Berlin, traced the pathway of protons all the way into the active center of [FeFe]-hydrogenases. Their findings might enable scientists to create stable chemical reproductions of such efficient, yet fragile biocatalysts. The researchers published their report in the journal Nature Communications from 9 november 2018.

Unique efficiency due to transfer pathway

In their catalytic center, hydrogenases manufacture molecular hydrogen (H2) from two protons and two electrons. They extract the protons required for this process from the surrounding water and transfer them – via a transport chain – into their catalytic core. The exact proton pathway through the hydrogenase had as yet not been understood. “This transfer pathway is a jigsaw piece, crucial for understanding the interplay of cofactor and protein which is the reason why biocatalysts are so much more efficient than hydrogen-producing chemical complexes,” explains Dr. Martin Winkler, one of the authors of this study from the Photobiotechnology research group at RUB.

In order to figure out which of the hydrogenase building blocks are involved in proton transfer, the researchers substituted them individually. They replaced each either by an amino acid with a similar function or by a dysfunctional amino acid. Thus, 22 variants of two different hydrogenases were created. Subsequently, the researchers compared those variants with regard to different aspects, including their spectroscopic properties and their enzyme activity. “The molecular structures of twelve protein variants, which were solved using X-ray structure analysis, proved particularly informative,” says Winkler.

Amino acids with no function shut down hydrogenases

Depending on where and how the researchers had changed the hydrogenase, hydrogen production became less efficient or stopped altogether. “Thus, we ascertained why some variants are severely impaired in terms of enzyme activity and why others are hardly impaired at all – against all expectations,” says Martin Winkler.

The closer to the catalytic centre the replaced amino acids were located, the less able the hydrogenase was to compensate for these modifications. If building blocks with no function were embedded in sensitive locations, hydrogen production was shut down. “The thus generated state resembles an oversaturation due to proton stress where protons as well as hydrogen are simultaneously introduced into the hydrogenase,” elaborates Martin Winkler. “In the course of our project, we were for the first time able to stabilise and analyse this highly transient state that we had already encountered in experiments.”

This study has made it possible to assign the functions of individual amino acids to the proton transfer pathway for the enzyme group of [FeFe] hydrogenases. “Moreover, it provides valuable information on the molecular mechanism of proton transfer by redox-active proteins and the structural requirements thereof,” concludes Thomas Happe.

The project was funded by the Volkswagen Foundation, the China Scholarship Council, and the German Research Foundation under the umbrella of the Resolv Cluster of Excellence (EXC1069).