Finding the star among nanoparticles

Fuel cells do not yet function optimally because the perfect catalyst is missing – the wrong methods have been used to find them so far, says Kristina Tschulik.

Professor Kristina Tschulik’s object of study is small. Very small. A thousand times smaller than the diameter of a human hair. These are nanoparticles that are produced in various forms and compositions and have become indispensable in industry. Catalysts for numerous reactions are produced in the form of nanoparticles. They consume little material but have a large surface on which the chemical reactions can take place.

An industrially produced batch of nanoparticles is a collection of many individuals that vary in shape, size and chemical composition. Kristina Tschulik is interested in each and every one of the tiny particles. With her team from the RUB Research Group for Electrochemistry and Nanoscale Materials, she characterises individual particles and determines which are particularly catalytically active.

I’m convinced we do not yet have the perfect methods to characterise the catalysts.

“If you knew which properties make individual particles particularly active, it would be possible to specifically produce particles with exactly these properties,” explains the chemist. Many promising technologies, such as fuel cells, do not yet work as desired at low cost because the optimal catalysts are lacking. “I’m convinced this is because we do not yet have the perfect methods to characterise the catalysts,” says Tschulik.

Comparable to a concert

The common methods are established for large electrodes. They provide an average value for an ensemble of nanoparticles. This would be sufficient if the particles were all the same, but they are not. “You have to imagine it like people at a concert: one person sings on stage, everyone in the crowd sings along,” compares the Bochum-based researcher. “If we only hear everyone singing together, we won’t find out who the star is – but that’s exactly what we want to hear.”

Because the nanoparticles are so small, they are usually made visible with special microscopes in a high vacuum – in other words, under conditions that are virtually non-existent on Earth. The researchers led by Kristina Tschulik have therefore developed a new method that allows them to analyse the particles directly in solution. More precisely, they combined an electrochemical with a spectroscopic method, thus being able to determine different characteristics of the particles.

The team uses an electrode as thin as a hair, applies a certain voltage to it and immerses it in a solution with particles. What is known as Brownian motion – a thermal movement that causes small particles in liquids and gases to move back and forth in an undirected manner – causes some of them to strike the electrode over time. If the voltage is selected correctly, these particles react on the electrode. Silver particles, for example, are converted into silver chloride or dissolved, depending on which substances the surrounding solution contains. Each time a silver atom reacts to form a single positively charged silver ion, an electron is released, which flows off as a current through the electrode. By measuring the current flow, the chemists can deduce the number of atoms that have reacted and thus the size of the particle. The method is so sensitive that chemists can measure currents in the picoampere range (10–12 amps). Even particles of 2 and 2.5 nanometres in diameter can thus be easily distinguished. The decisive factor for this electrochemical method is that the particles are present in the solution in low concentrations so that they strike the electrode individually. 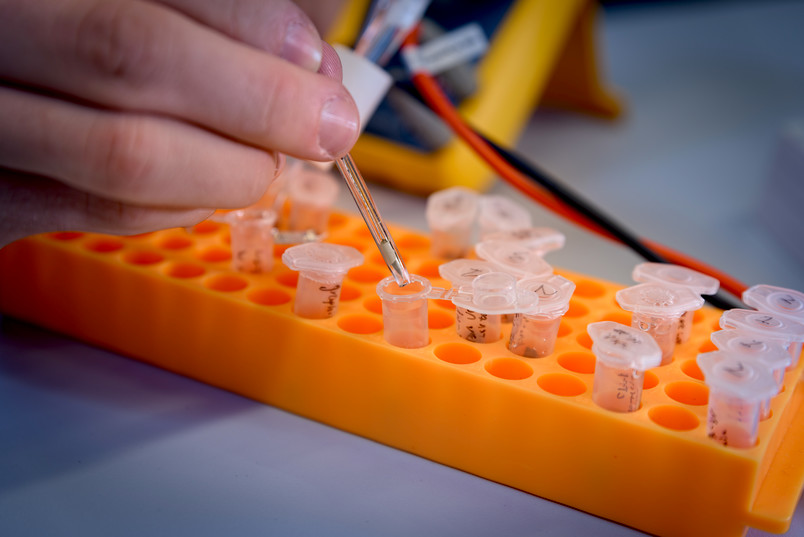 Only small amounts of the particle solution are required for the measurements – as well as a steady hand to position the wafer-thin electrodes.
© Roberto Schirdewahn

Kristina Tschulik helped to develop this electrochemical method in Oxford from 2012 on. Her Bochum team has now brought it together with the so-called dark-field microscopy. The latter allows the chemists to visualize the particles in real time as coloured dots. Using the colour change, or more precisely using the spectral information, they can track what happens to the particles on the electrode surface, for instance, whether they dissolve or transform, for example into silver chloride.

This spectro-electrochemical method allows them to address different types of particles specifically. The voltage that the researchers have to apply to the electrode depends on the material the particles of interest are made of. It thus reveals their chemical composition. For example silver particles react at a lower voltage than gold particles. “We therefore have a chemical nano-sniffer dog and a method that provides quantitative size information in the particle’s native environment. This is very rare,” summarises Tschulik. Scientists can also use the technology to observe whether particles clump together, i.e. when the particles that hit the electrode become larger over time.

The method enables Tschulik’s team to determine not only the size of nanoparticles, but also how efficiently they work as catalysts. For this analysis, the scientists set the conditions so that the particles do not dissolve at the electrode but instead catalyse a chemical reaction there. The current flow tells them the conversion rate. In addition, they can monitor whether the activity of the ageing particle remains constant or decreases or even increases over time. Following the electrochemical analysis, they can observe the particle adhering to the electrode under the microscope and thus determine its shape.

According to Kristina Tschulik, making this effort for many individual particles is worthwhile: “The catalyst activity does not change in a linear manner with their physical properties,” she says. “A particle that is half the size of another particle is not automatically half or twice as active.” There are highly complex and unpredictable relationships between the shape, size and composition of particles and their activity in catalysis. Each individual could therefore be a star.

Kristina Tschulik and her team now have a tool at hand with which they can search for these stars among the nanoparticles. They want to make their contribution to finding the optimal catalysts for fuel cells, the electrolysis of water and other technologies in the field of renewable energy.