Why we should never forget to resurface after virtual submersion in the past.

All aboard for a tram ride in Cologne of 1907! The carriage is rocking, the wind is blowing into the passengers’ faces, and all kinds of things are going on in the streets around them that they can view using virtual reality (VR) headsets. A fantastic new experience for tourists in Cologne. The insights gained during the ride are of secondary importance – the main thing is to supposedly immerse yourself in a long-gone era.

See the world through a prisoner’s eyes

Experiences such as this have been gaining in popularity, e.g. in museums and at memorial sites – and why not use the technology in history lessons at school to render history more attractive?
“VR certainly offers great potential,” says Professor Christian Bunnenberg, history didactics scholar at RUB. “But it also presents a challenge.” The researcher knows for example of a VR experience at the Stasi Memorial Berlin-Hohenschönhausen. Here, in the former prison of the East German Ministry of State Security, visitors are given the opportunity to see the world through a prisoner’s eyes, to experience admission, prison routine and interrogation first-hand. As the virtual journey takes place at the original location and is based on real records, the creators point out its authentic character and advertise it as a “unique historical experience”. Bunnenberg, however, considers this tricky in several respects.

“First, you can clearly see that the participants are emotionally overwhelmed,” he explains (see film). “The way the visitors are addressed by the actor in this 360-degrees film is so harsh that even I took off the goggles every now and then, because it became too much.”

A presentation such as this lacks any distance. “The experience is all about an aesthetic and emotional overload, without releasing the tension,” criticises Christian Bunnenberg. And it would have been so simple to do just that: all the actors had to do was to take off their uniforms at the end of the film in order to state very clearly: we’re actors in 2017. In conclusion: the product offers nothing but an immersion in the film, without permitting the visitors to resurface.

I am by no means trying to demonise VR experiences.

Bunnenberg considers this approach to contravene the so-called Beutelsbach Consensus: following a conference in 1976, the participants agreed on three principles for civic education in school: Giving weight to the personal interests of pupils, prohibition against overwhelming the pupils, and treating controversial subjects as controversial.

“History classes in school are supposed to teach students the skills necessary to reconstruct the past – more often than not with the aid of written sources – and to raise the awareness that it’s not possible to gain a complete understanding of the past,” points out the researcher. “It is therefore advisable to choose as many perspectives as possible and understand them within the context of their respective era. On the other hand, students must also acquire skills for dealing with historical representations – historical novels, films, computer games as well as virtual reality experiences – in a way that enables them to deconstruct those narratives.” Even 60 years after finishing school, people possessing such skills should ideally be able to enjoy virtual journeys into the past, while asking themselves at the same time: what have I just seen? Not an accurate reflection of the past, that’s for sure. 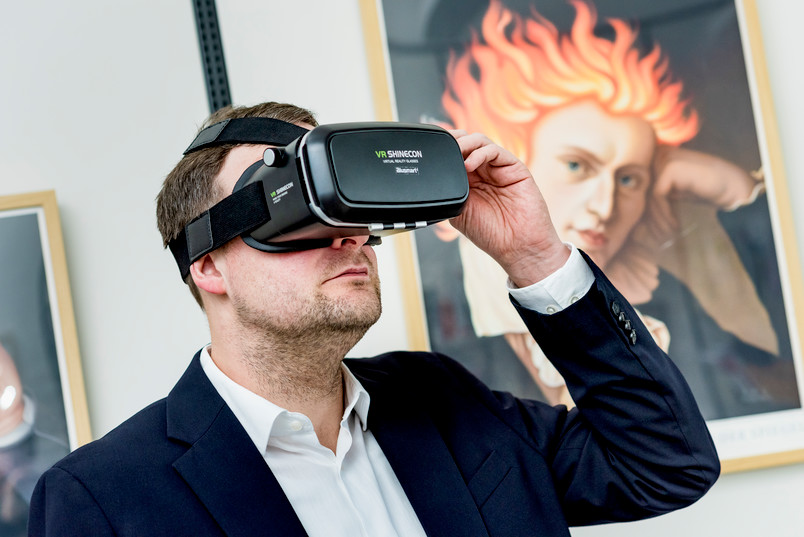 Immersion in virtual worlds – the experience that is today created with VR goggles will in future be perfected with full body haptic suits.
© Damian Gorczany

“I am by no means trying to demonise VR experiences,” says Bunnenberg. Rather, he is attempting to figure out in what way such films can be meaningfully integrated into history classes. How can experience be balanced against knowledge? What has to be done to prevent overwhelming students – both in emotional and in cognitive terms?

His search for other examples of VR being used for educational purposes led Bunnenberg to a tour of prehistoric Zurich, where remains of pile dwellings have been unearthed during construction works. Following the digital reconstruction of the original settlement, visitors can have a look around, either at the computer or with virtual reality goggles. However, they never immerse themselves fully; rather, they are accompanied by the voice of a tour guide, who thus helps maintain the necessary distance. At conferences with his peers and in the degree course Public History, Bunnenberg is constantly scouting for other opportunities to integrate VR in history classes and use it for educational purposes in locations outside the classroom, too.

“The important thing is: history classes must expose the fact that history is a construct,” stresses Bunnenberg. “History means discussing the past in a way that is closely linked to the era and perspective when it was written.”