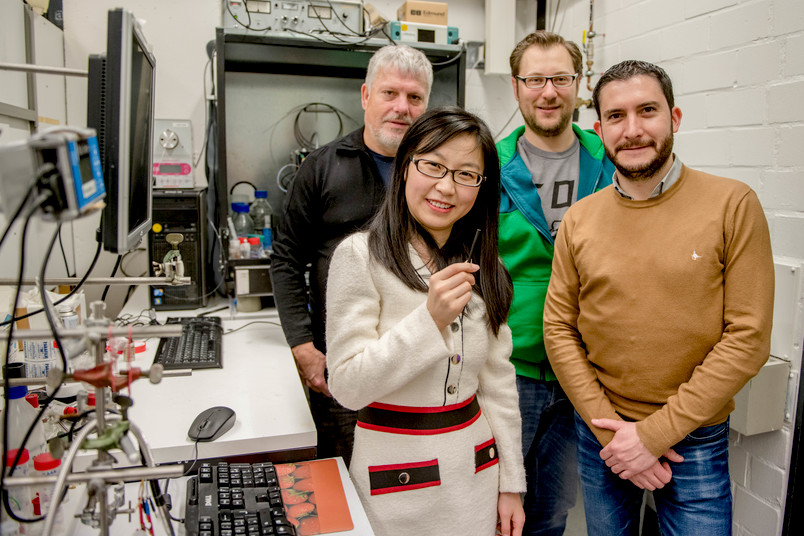 Improving the lifetime of bioelectrodes for solar energy conversion

The key to a long life for bioelectrodes lies in an oxygen-free environment.

The use of proteins involved in the photosynthetic process enables the development of affordable and efficient devices for energy conversion. However, although proteins such as photosystem I are robust in nature, the use of isolated protein complexes incorporated in semi-artificial electrodes is associated with a considerably short long-term stability. In consequence, the technological application of these kind of biodevices is still limited. Researchers at RUB showed that a careful operation of the photosystem-based bioelectrode under the exclusion of oxygen is the key for achieving high stability.

The team involving Dr. Fangyuan Zhao, Dr. Adrian Ruff, Dr. Felipe Conzuelo, and Professor Wolfgang Schuhmann from the Chair of Analytical Chemistry and Center for Electrochemical Sciences, together with Professor Matthias Rögner from the Bochum Chair of Plant Biochemistry describes the results in the renowned “Journal of the American Chemical Society”.

Oxygen is to blame

The scientists have already shown in a previous study that under operation of the bioelectrode reactive molecules are formed that damage photosystem I and are responsible for a limited lifetime of the biodevice. These reactive species are associated to the use of oxygen as final electron acceptor. Therefore, the design of bioelectrodes operating in an oxygen-free environment was suggested.

An important step towards the application

Now, operation of the bioelectrode under the exclusion of oxygen has proven to effectively increase the lifetime of the device for a substantial period in comparison with the results obtained in the presence of ambient oxygen. As the authors explain, the obtained results are an important step towards the efficient development and possible application of photobiodevices for energy conversion.