The causes of the disease are for the most part obscure. Researchers intend to expose them using cerebral organoids grown from stem cells.

In the majority of cases, dementia can be traced back to Alzheimer’s disease. The causes of the disease are not really understood as yet. What is known is that plaques form from misfolded proteins and that there is an increase in neuronal cell death levels in the brain.

“The surprising thing is that neither the plaques nor the loss of neural cells must necessarily go hand in hand with Alzheimer’s symptoms such as forgetfulness,” says Dr. Thorsten Müller, Head of the research group Cell Signalling at the RUB Chair of Molecular Biochemistry. “Studies with aged nuns have shown that they were able to handle their everyday life pretty much unimpaired almost until the moment of their death, even though – as emerged later – plaques that are typical of Alzheimer’s were present in their brains.”

How dangerous are the plaques?

Thorsten Müller and his team suspect other abnormalities to be the causes of the disease: a few years ago, they successfully demonstrated that, in addition to plaques outside neuronal cells, harmful protein residues might also accumulate inside the cell nuclei. Those proteins may lead to cell death.

“The amyloid precursor protein APP is the precursor substance of both,” explains Thorsten Müller. The protein is embedded in the cell membrane of neuronal cells, protruding from it on both the inside and the outside. The protein is cleaved by secretases – usually only once, near the middle. The cleaved fragment inside the cell is unstable and disintegrates. 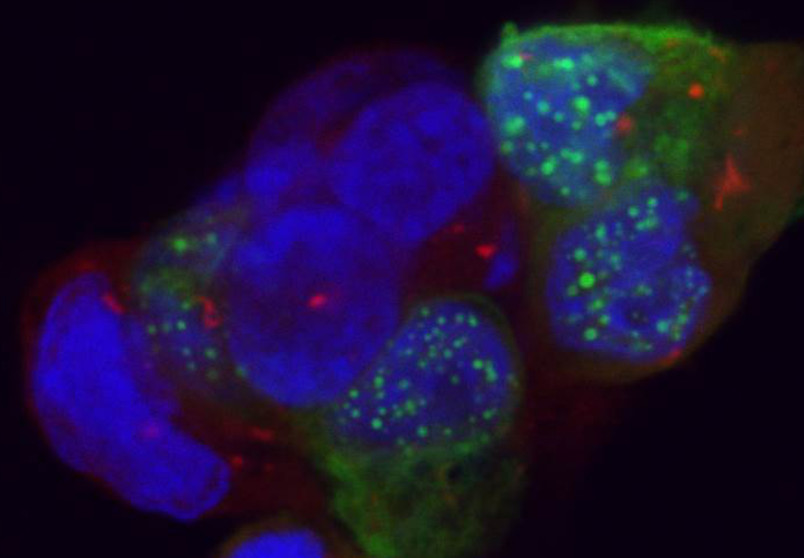 The green dots are nuclear aggregates. In cells that appear uniform blue, no aggregates have formed (yet).
© Thorsten Müller

In Alzheimer’s patients, the protein is cleaved twice and is thus split into three parts. The middle parts that are the result of several cleavages agglutinate and form plaques outside the neuronal cells that are typical of Alzheimer’s disease. The cleaved fragment inside the cell is more stable. Its interaction with another protein, namely FE65, undergoes several interim stages and eventually results in the residue migrating into the cell nucleus. There, residues accumulate over time, forming complexes. “In cell culture experiments, this process leads to cell death,” says Müller.

Still, he is cautious to conclude that this is how Alzheimer’s disease actually originates, as there is a big difference between cell culture and living brain.

“In cell cultures, we utilise APP in huge quantities in order to perform our analyses,” he explains. “Accordingly, the tests are performed under artificial conditions that are far removed from actual physiological conditions.” Moreover, microscopic studies can only be conducted in fixed and dyed neuronal cells that are no longer living. Due to all these factors, it has been as yet not possible to observe when and under which conditions which proteins and protein fragments migrate to which location. 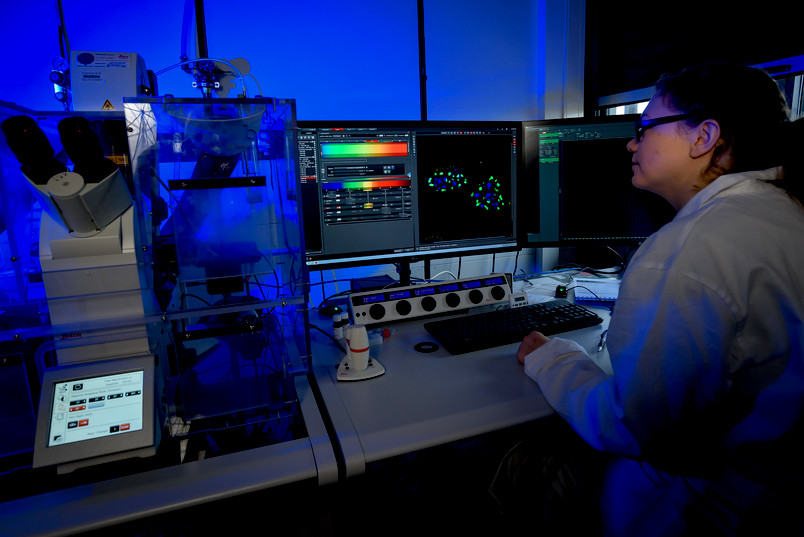 Sophia Meermeyer studies a cell culture sample under the microscope. Different aggregates have formed in the nuclei and are dyed blue resp. yellow. The yellow aggregates are caused by FE65 and that part of APP that was located inside the cell migrating into the nucleus.
© Roberto Schirdewahn

An answer to these questions may be gained using a promising novel method, eagerly anticipated by Thorsten Müller and his team. So-called organoids from induced pluripotent stem cells– i.e. stem cells that can be harvested from an adult organism – assume the function of a mini-brain. “To this end, a stem cell is induced to differentiate into a brain cell and is grown in a nutrient solution,” elaborates Thorsten Müller. “After a while, structures resembling those of the brain begin to form in dimensions of several millimetres.” For the period of approximately three months, the system works like a miniature brain; then, it begins to mortify from the inside, as its core is no longer penetrated by the solution and it is therefore no longer adequately supplied with nutrients. The necessary vascular system doesn’t form. Still, the neuronal cells work just like those in a real brain. The researchers have a number of tricks at their disposal to make the mini-brains age artificially. One of the methods is, for example, oxidative stress, which can be induced by adding hydrogen peroxide, or through UV radiation that causes damage to the genetic makeup.

The unique trick employed by the Bochum-based group is to alter the genetic makeup of the stem cells from which the mini-brains are formed. “We utilise the Crispr/Cas method for this purpose – the so-called genetic scissors,” points out Thorsten Müller. “Unlike many other researchers, we do not simply switch off individual genes; rather, we inject specific components.”

The components in question are markers such as green fluorescent protein (GFP) or marker sequences in other colours. By inserting markers in different colours at the beginning and the end of a gene sequence that contains the APP blueprint, the researchers are able to trace precisely to which location the protein or its cleaved fragments migrate. 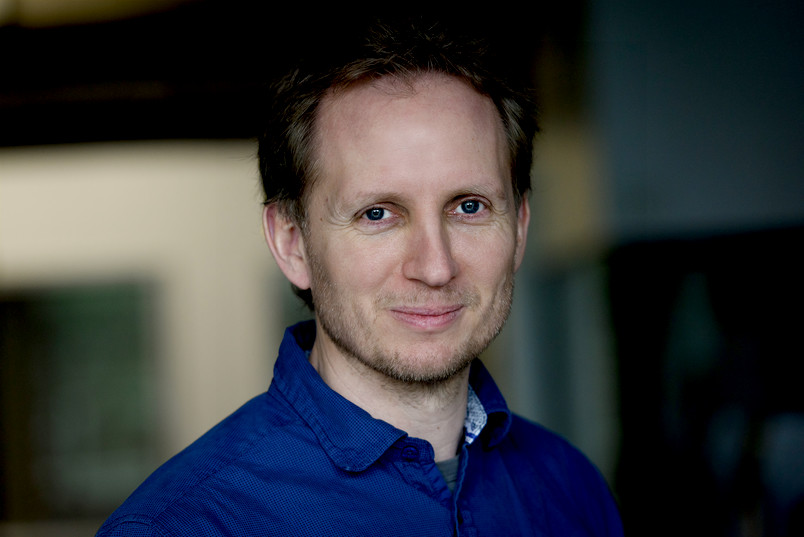 “With the aid of organoids, we can monitor such processes in a living system – no fixing and dyeing necessary,” stresses Thorsten Müller. “We can thus observe under the microscope in real time how long the entire APP remains uncleaved, when and where it is cleaved, and where the cleaved products migrate to.” In a first step, the researchers have thus been able to verify the findings gathered in cell cultures in a living system. Since other genes can likewise be labelled with markers, the entire process works like a modular system: by marking different components, the researchers can monitor any individual component. They are thus hoping to figure out the true composition of the aggregates in the cell nuclei and to understand what causes them to migrate into the nucleus in the first place.

“Growing brain-like tissue in the lab might seem rather questionable,” concludes Thorsten Müller. But Alzheimer’s research is still in its infancy, and we have now been given the chance to gain new insights.” Last but not least, a system like that may render animal testing obsolete – the researchers’ last resort due to a lack of alternatives.

“Thanks to brain-like tissue we have now been given the chance to gain new insights for Alzheimer’s research, which still is in its infancy”, concludes Thorsten Müller. Last but not least, a system like that may render animal testing obsolete – the researchers’ last resort due to a lack of alternatives.

In future, organoids might also prove very useful in the treatment of certain mental disorders such as schizophrenia. To date, doctors have been forced to try out a broad spectrum of possible substances to identify the one that will help their patient. Patients are given a drug and have to come back four weeks later to report if it produced the desired effect. If not, they will be given another one, following the trial-and-error approach.

It is conceivable that in future blood samples will be taken from patients after they have been diagnosed with schizophrenia to harvest stem cells from the blood. Those stem cells would then be deployed to grow several organoids. Each of those organoids could thus be used to test potential active substances, with the aim of identifying the one that would help individual patients before starting treatment.