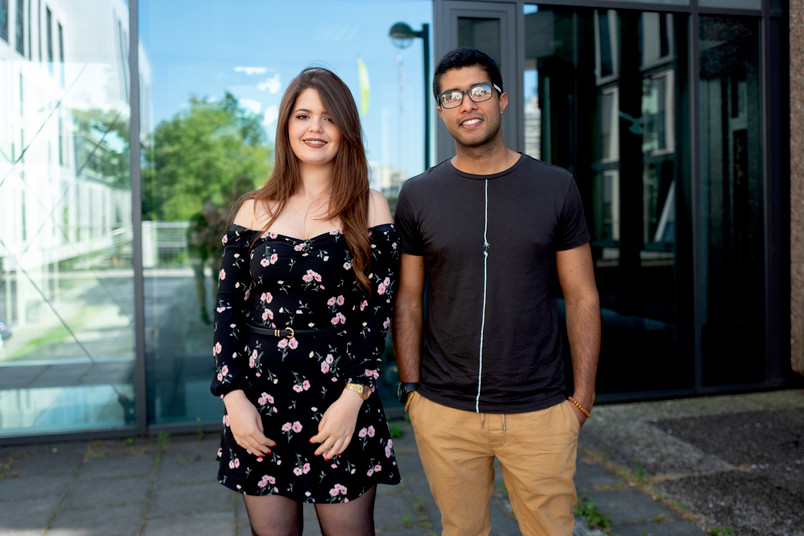 Fingers crossed for Salma Allani and Elton Alcântara Oliveira: both students are waiting for their test results in order to enrol in their degree courses.
© RUB, Kramer
Language Exam

“A lot depends on the test”

Following the 100th exam for German as a foreign language, two participants have related what it was like and why they continue studying German even after the test is over.

Salma Allani from Tunesia and Elton Alcântara Oliveira from Brazil took part in the test for German as a foreign language, Test-Daf for short, in July 2019. They thus sat the 100th exam of this kind, which is run by Ruhr-Universität Bochum Test-DaF Centre several times per year. “It wasn’t difficult, but it wasn’t easy, either,” as Salma Allani describes her exam experience. “The most difficult task was listening comprehension. And time restrictions are always a problem, in all tasks,” she says.

Writing, listening, reading and speaking: everyone who participates in a Test-Daf exam covers all four test formats. And they have only very limited time to complete each task. The participants are faced with different subject matters in quick succession. “You never know which academic topics will come up in the exam. I find everything biology-related difficult. Luckily, this field wasn’t part of the test this time,” says Alcântara Oliveira.

I found the prep course at the department very helpful.

He sat the exam for the second time. The first time round, he’d been studying without attending a prep course – and failed the exam by one point. This is why he then enrolled at the Department of German as a Foreign Language, which also incorporates the Ruhr-Universität Bochum Test-DaF Centre. “I found the prep course at the department very helpful,” he says.

The Test-Daf Centre recommends the B2 language level in order to attend the course. Over the span of four weeks, the prep course participants familiarise themselves with the exam situation and structure. Salma Allani benefitted in particular from the preparations for the oral exam.

Salma Allani, who has been in Germany for nine months, intends to study Master Management and Economics in Bochum. “I can’t enrol in the degree course without a Test-Daf certificate,” she explains. And this is not the only thing that hinges on the test; the other is her residence status in Germany. She will get a visa extension only once she passes the test and is accepted at a university.

Elton Alcântara Oliveira has been living in Germany since 2017. In Brazil, he already graduated in law. In addition, he wants to complete a Master’s degree in civil law. He’s already been admitted at Universität Bonn. “This is my dream. That’s what I want to do. But for this, I need a certificate,” he says.

Both students won’t be notified of their results until the end of August. Until then, all they can do is wait and continue studying. Anyone who failed the exam can take part in the next one in September 2019. “There’s a lot of pressure, because a lot depends on the test. The study period was very stressful. This is why I’m now trying to recuperate and to clear my head,” says Allani. “I find it helpful to read texts in German and to listen to podcasts in order to become a little bit better every day. I’m planning to return to my regular study schedule by mid-August,’ says Alcântara Oliveira.

About the Department of German as a Foreign Language

The Department of German as a Foreign Language (DAF) is part of the University Language Center at RUB. DAF has been a licensed examination centre for the officially approved language certificate Test-Daf since 2001. At Ruhr-Universität Bochum, the relevant exams take place six times per year. Approx. 100 participants take part in each exam. Most of them need the certificate in order to be accepted at a German university. Students have the option to attend a prep course before the exam.