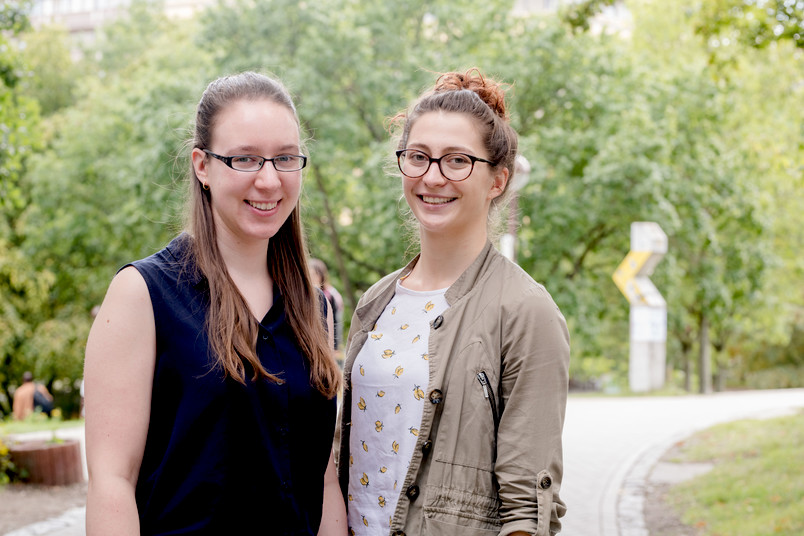 Christina Gangemi and Alexandra-Madelaine Tichy (right) have been working together on a research project in biochemistry at RUB.
© RUB, Marquard
Biochemistry

Research in Bochum and Melbourne

PhD students Alexandra-Madelaine Tichy and Christina Gangemi from Monash University in Melbourne conducted a research project at RUB in August 2019. Their visit was part of a programme funded by the German Academic Research Service (DAAD). Both early career researchers collaborated in a project headed by Professor Konstanze Winklhofer at the Department of Molecular Cell Biology at the Faculty of Medicine. In this project Professor Winklhofer’s research group cooperates with that of Dr. Harald Janovjak in Melbourne.

“My research is all about analysing how light might be used to regulate hormones,” says Alexandra-Madelaine Tichy. “In Bochum, I benefitted from Professor Winklhofer’s expertise – especially in the field of neurodegeneration,” she continues. Neurodegeneration describes the loss of function and demise of neurons and occurs, for example, in Alzheimer’s and Parkinson’s patients.

At RUB, I had the opportunity to broaden my research context.

Christina Gangemi studies how light might be used to stimulate growth of certain cells in the pancreas that are responsible for insulin production. In patients suffering from type 1 diabetes these cells are damaged. “At RUB, I had the opportunity to broaden my research context and to analyse if mechanisms that protect pancreatic cells can also be activated in neurons,” explains the PhD researcher.

In so-called optogenetic regulation, cellular processes can be influenced by light-activated receptor proteins. Both early career researchers hope their findings will help treat diseases such as Parkinson’s, Alzheimer’s or diabetes. “In case of diabetes, for example, drugs are frequently used to stimulate insulin-producing cells. Compared with drugs, the pros of light are compelling: it can be focused with considerable accuracy at the spot that requires treatment and its intensity can be regulated,” Gangemi points out.

We learned a lot about different experimental approaches.

“The three weeks I spent in Bochum were very helpful. We felt very much at home here and learned a lot about different experimental approaches. Moreover, Professor Winklhofer organised a museum excursion to the Gasometer in Oberhausen to introduce us to the Ruhr heritage and culture,” as Alexandra-Madelaine Tichy describes her visit to Germany.

But the collaboration doesn’t stop after their return home. In December 2019, two PhD researchers from RUB will be travelling to Monash University. More return visits are planned for the future. The project will continue until late 2020.