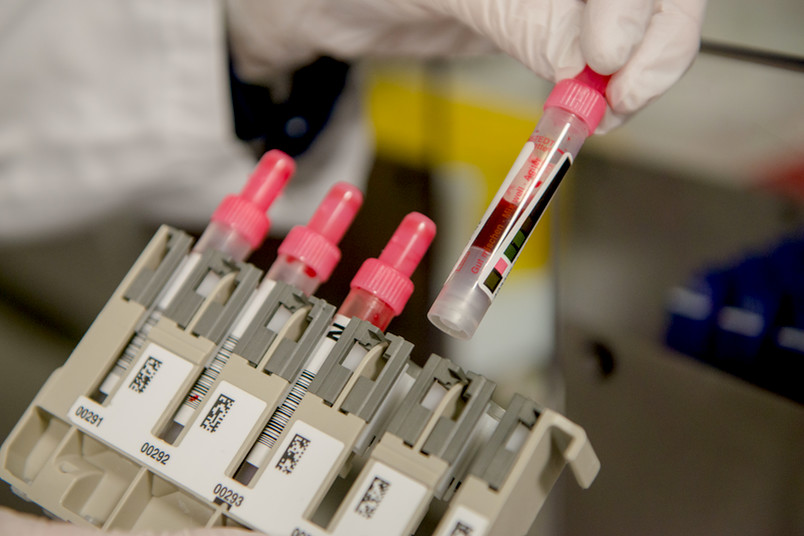 The risk for Alzheimer’s disease could in future be determined by a blood test developed at RUB.
© RUB, Marquard
Early diagnosis

Protein misfolding as a risk marker for Alzheimer’s disease

Up to 14 years before the diagnosis, the marker indicates the risk for Alzheimer’s disease.

In symptom-free individuals, the detection of misfolded amyloid-β protein in the blood indicated a considerably higher risk of Alzheimer’s disease – up to 14 years before a clinical diagnosis was made. Amyloid-beta folding proved to be superior to other risk markers evaluated, as shown by scientists from the German Cancer Research Center (DKFZ), Ruhr-Universität Bochum (RUB), the Saarland Cancer Registry, and the Network Aging Research at Heidelberg University.

No treatment as yet

There is currently still no effective treatment for Alzheimer’s disease. For many experts, this is largely due to the fact that the disease cannot be clinically diagnosed until long after the biological onset of disease when characteristic symptoms such as forgetfulness appear. However, the underlying brain damage may already be advanced and irreversible by this stage.

“Everyone is now pinning their hopes on using new treatment approaches during this symptom-free early stage of disease to take preventive steps. In order to conduct studies to test these approaches, we need to identify people who have a particularly high risk of developing Alzheimer's disease,” explained Professor Hermann Brenner from DKFZ.

In patients with Alzheimer’s disease, misfolding of the amyloid-beta protein may occur 15 to 20 years before the first clinical symptoms are observed. The misfolded proteins accumulate and form amyloid plaques in the brain. A technique devised by Professor Klaus Gerwert from the Biophysics Department at RUB can determine whether amyloid proteins are misfolded in blood plasma.

In a previous study, Gerwert and Brenner showed that the amyloid-beta changes in the blood can be demonstrated many years before the clinical onset of disease. They also showed that demonstration of misfolded amyloid-beta in the blood correlates with plaque formation in the brain. The researchers now wanted to investigate whether analysis of amyloid-beta can be used to predict the risk of developing Alzheimer's disease and how the risk marker performs in comparison to other known and suspected risk factors.

To do so, they reexamined blood samples collected as part of Esther, a cohort study led by Hermann Brenner and conducted in collaboration with the Saarland Cancer Registry. The cohort study was initiated back in the year 2000.

In the current study, the researchers looked at the initial blood samples of 150 Esther participants in whom dementia was subsequently diagnosed during the 14-year follow-up period. These samples were compared with those of 620 randomly selected control participants not known to have been diagnosed with dementia who correlated with the dementia participants in terms of age, sex, and level of education.

Participants with Amyloid-beta misfolding had a 23-fold increased odds of Alzheimer’s disease diagnosis within 14 years. In patients with other types of dementia, such as those caused by reduced blood supply to the brain, the study did not demonstrate an increased risk, supporting Alzheimer’s disease specificity.

The researchers also included a number of other possible risk predictors in their analysis, including a particular variant of the gene for apolipoprotein E (APOE4) and pre-existing diseases (diabetes, high blood pressure, depression) or lifestyle factors (bodyweight, level of education). With the exception of the APOE4 status, which showed a 2.4 times higher risk in those people who later went on to develop Alzheimer’s disease, none of the factors studied correlated with the risk of disease.

In predicting the risk of disease, it was largely irrelevant whether 0 to 8 or 8 to 14 years had passed between the time the blood sample was obtained and the clinical onset of dementia.

“This work was not about the use of amyloid-beta folding as a diagnostic marker. Instead, we wanted to examine whether this marker could be used for risk stratification in the Alzheimer’s disease therapeutic development setting. Amyloid-beta misfolding proved to be a far superior risk marker compared to the other potential risk factors,” explained lead author Hannah Stocker from DKFZ and the University of Heidelberg’s Network Aging Research. 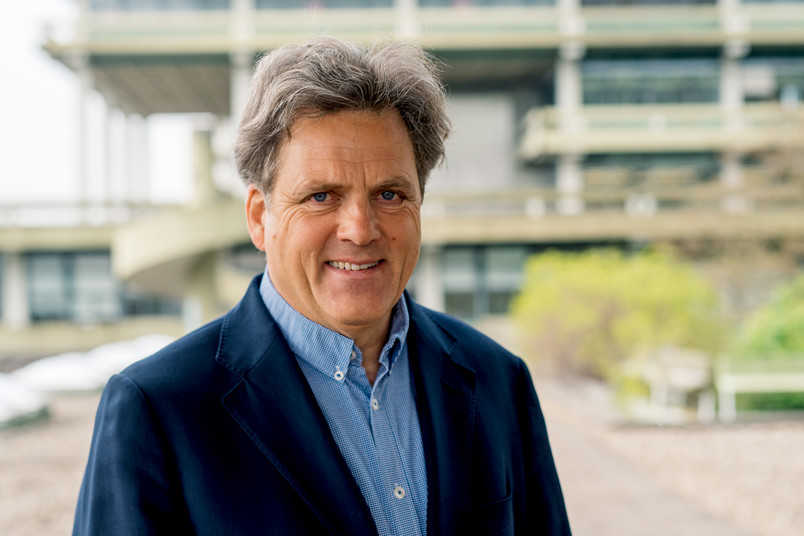 Klaus Gerwert is the founding director of the Centre for Protein Diagnostics.
© RUB, Kramer

“The new test may be a non-invasive and inexpensive way of identifying high-risk groups who do not yet have any symptoms. The drugs that have not shown any effect in clinical trials thus far could possibly be more effective in these high-risk individuals,” Klaus Gerwert remarked. “The measurement of misfolded amyloid-beta in the blood may therefore make a key contribution toward finding a drug against Alzheimer’s disease.”

Further studies are however needed to verify whether the laboratory method is suitable for determining the risk of developing Alzheimer’s disease in symptom-free individuals. The researchers now want to establish how reliable the analysis of amyloid-beta changes is in larger groups. If amyloid-beta misfolding is detected in blood plasma, this must be confirmed using an established method of early diagnosis of Alzheimer’s disease, for example by examining the cerebrospinal fluid or using special imaging methods. The measurement of misfolded amyloid-beta is therefore not currently available for individual risk assessment.

The measurement of amyloid-beta changes is based on a technology known as immuno-infrared sensor, which measures the ratio of misfolded to normally folded amyloid-beta. Misfolded proteins tend to aggregate in amyloid plaques, while healthy structures do not. The two structures absorb infrared light at different frequencies, which means that the blood test can determine the ratio of healthy to pathological amyloid-beta in the sample.