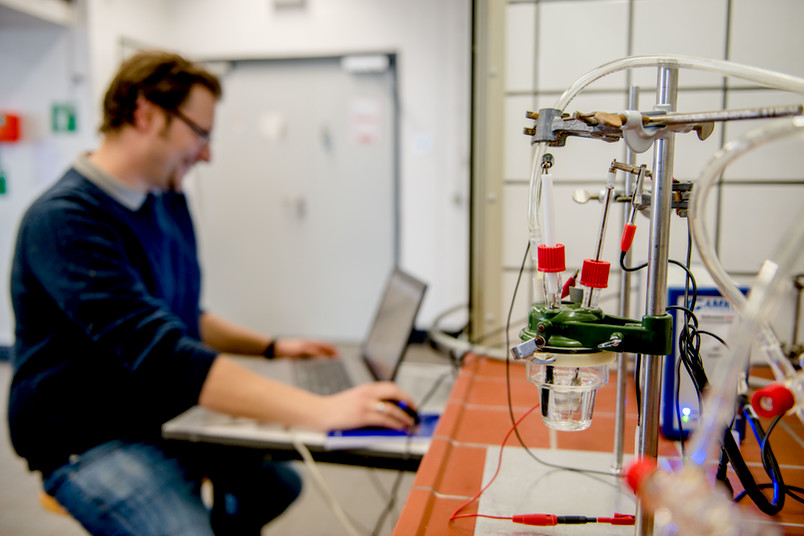 The Bochum researchers are testing in the laboratory how enzymes can be used for technical processes.
© RUB, Marquard
Chemistry

Bioelectrocatalysis as basis for the energy revolution

Science has come a long way, but there are still some obstacles that prevent a breakthrough.

Biocatalysts are promising materials for the switch to renewable energies. But what works in the laboratory does not necessarily mean a breakthrough for industrial applications: a research team from the Center for Electrochemical Sciences (CES) at RUB discusses hurdles that have to be overcome in the journal Nature Catalysis from 25 November 2019, focusing on two main research fields: the development of bioelectrodes for hydrogen oxidation for biofuel cells and the development of efficient biophotoelectrodes for the solar-assisted synthesis of chemicals and regenerative fuels.

The effectiveness and selectivity of biological catalysts have been continuously optimised by nature over millions of years. Redox proteins are a special class of these enzymes, as they catalyse not only purely chemical reactions but also reactions coupled to an electron transfer. “In this respect, the analogy to reactions such as those used in industrial electrocatalytic processes such as hydrogen oxidation or oxygen reduction on precious metals in fuel cells is of great importance,” says Professor Wolfgang Schuhmann from the Center for Electrochemical Sciences at RUB. Another essential class are light-activated enzymes that are activated by light irradiation and can generate an electron flow, in the same way as semiconducting materials. A key factor is that such enzymes contain active centres which, in contrast to catalysts based on precious metals and purely inorganic semiconductor materials, are made up of elements that are abundantly present in nature.

Only a few applications to date

Because of these properties, such biological systems constitute promising model compounds or even alternatives for future catalyst and semiconductor technologies. “However, to date only a few specific electrocatalytic applications have been implemented by bioelectrocatalytic methods,” says Wolfgang Schuhmann. The properties of the enzymes themselves and the use of special and complex electrode architectures, which are necessary for the development of powerful and thus competitive processes, curtail such processes.

In the review article, the RUB team discusses the limitations and hurdles to be overcome for the technological use of hydrogenase-based bioelectrodes for hydrogen oxidation and efficient biophotoelectrodes based on protein complexes from photosynthesis, photosystem I and II, as well as bacterial photoactive centres.

The essential aspect for the structure and design of bioelectrodes is the electrical connection of enzymes to the electrode surface. The authors describe how specifically synthesised redox polymers not only immobilise and electrically wire the enzymes, but also protect them from harmful substances such as oxygen.

In addition, the team outlines approaches that facilitate deployment in processes on a large scale. “Here, we are paying particular attention to the potential of synthetic enzymes, which are regarded as a major step towards potential applications,” says Dr. Adrian Ruff from the project team. Technological approaches such as the introduction of special electrode materials, the use of gas diffusion electrodes to increase mass transport, or special immobilisation methods such as the directed binding of photoactive enzymes using the Langmuir-Blodgett technique are also discussed.

The research was funded by the German Research Foundation under the umbrella of the Ruhr Explores Solvation Resolv Cluster of Excellence.