What we see affects what we feel

Why the back hurts less when we look at it.

People who suffer from back pain often feel significantly impaired. If the pain is chronic, i.e. lasting for more than six months, it puts a strain on the whole life, affects everyday life, and prevents patients from working or participating in social activities. “Patients are very familiar with their pain,” says Professor Martin Diers from the Department of Psychosomatic Medicine and Psychotherapy at the LWL University Hospital of the Ruhr Universität Bochum (RUB). “For example, they can say at which time exactly during the day the pain occurred or how it feels like. But for them it is difficult to describe the exact location of the pain.” Some chronic pain patients even leave a gap when asked to draw the outline of their body at the respective spot.

Nobody knows exactly how the own back looks like

Diers and his colleagues wanted to know if the chronic pain intensity could be modulated by looking at the painful site. “We do not know how our own back looks like exactly because we cannot see it directly,” explains Martin Diers. He dedicated several studies to this problem, both with pain patients and with control subjects without back pain. In either case a video camera was used, which was placed behind the participants and transmitted the image of their backs in real time to a monitor in front of the person. The participants rated the intensity of their pain on a scale from zero to ten. 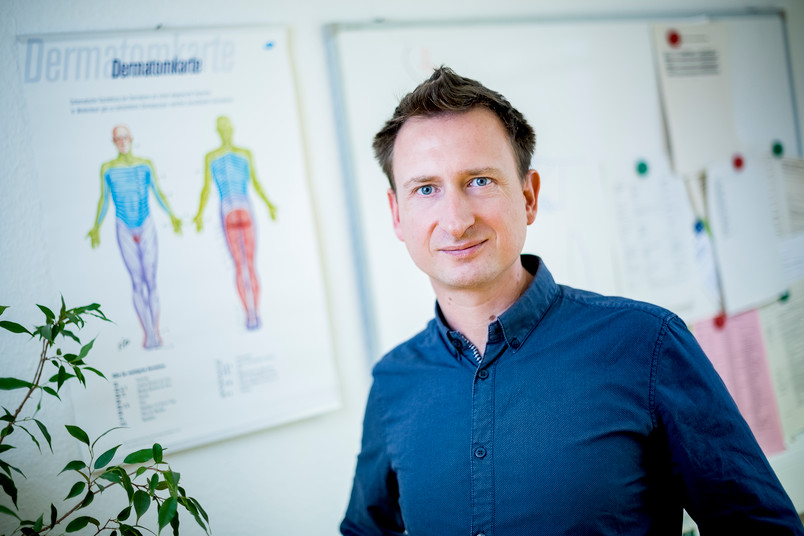 Martin Diers works at the Department of Psychosomatic Medicine and Psychotherapy at the LWL University Hospital of the RUB.
© Damian Gorczany

“We demonstrated that merely watching the real-time video of their own back reduces the chronic back pain intensity after one minute,” concludes Martin Diers. If the patients saw another patient’s video instead of their own, or a photo of their back or a book, no changes in pain intensity were reported.

The resolution of visual information is higher

In another study, the researchers applied a painful stimulus to the participants’ back, for example an electrical stimulus or a strong pressure stimulus. The test persons could sometimes see their backs on the monitor, sometimes not. “If they saw their back during the application of the pain stimulus, they reported a lower pain intensity compared to looking at their hand, even though the stimulus on their back had exactly the same intensity,” says Martin Diers.

“Pain stimuli activate certain nerve cells in the skin, which transmit a signal to the brain and are processed there,” says the psychologist. “The resolution of this system could be increased in conjunction with the visual information. This helps to determine the location of the painful stimulus more exactly.

We could demonstrate that the massage was much more effective if the patients were able to look at their back during the massage.

Consequently, pain specialists take advantage of the combination of several senses. This is called multisensory integration. For the application of this approach in treatments, they analysed the effect of watching the treated area of the body in different therapies for chronic back pain patients. During a massage of the painful area of the body, for example, they showed patients either the real-time video of the treatment or a recording of a massage of another person, a photo of their own back or a book, or they asked them to keep their eyes closed.

“We could demonstrate that the massage was much more effective if the patients were able to look at their back during the massage,” concludes Martin Diers. “The same applied to manual therapy, a physiotherapeutic treatment using mobilisation.” Diers advocates the integration of such multisensory processes into treatment.

The illusion of the third hand

The significance of visual information for the perception of one’s own body has also been impressively demonstrated by other studies. An example is the rubber hand illusion. Here, the test subjects place one hand in their field of view, the other behind a board. A rubber hand is placed between the two hands in a way that the participant sees their own and the rubber hand as they normally see their own two hands. 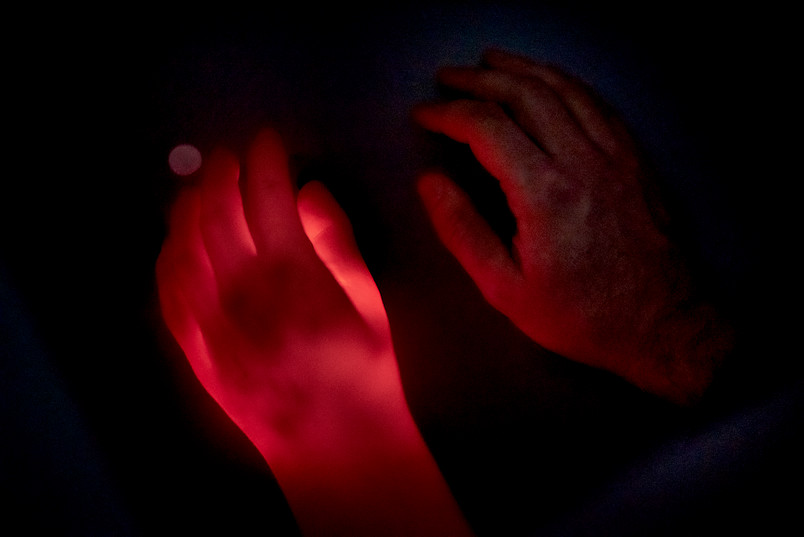 When the hidden hand was heated up to a painful temperature, the pain was perceived less strongly in the synchronous rubber hand illusion compared to the asynchronous one.
© Damian Gorczany

If the hidden real hand and the rubber hand are touched at the same time, for example with a brush, the participant’s rubber hand appears to belong to their own body. Diers and his team showed that light and temperature stimuli can also cause the rubber hand illusion. To this end, the persons placed their hidden hand on a surface of which the temperature was adjustable. Under the rubber hand there was a hole in the table through which red light could be projected onto the hand.

Don’t look away during injections?

A person who looks at the painful body area feels less pain and treatments are more likely to be successful. But that doesn’t necessarily mean that you should look when you’re getting an injection. “Colleagues reported that the opposite is true: a person who sees the picture of an injection perceives a painful stimulus presented at the same time as more unpleasant,” says Martin Diers.