Understanding pain as a signal

While some people immediately expect the worst when they experience physical discomfort, others manage to remain positive or even alleviate the pain by implementing certain behavioural strategies.

What’s even worse than back pain is chronic back pain. The kind that never seems to go away, no matter what therapy you try. It affects approx. 35 to 40 per cent of all back pain patients. However, the way they feel the pain and how much it affects their life can vary greatly from person to person.

Professor Monika Hasenbring has spent almost her entire life as a researcher exploring the question of how individual pain processing affects the development of chronic complaints, because she is aware that they are not a purely medical but also a psychological phenomenon.

As head of the Department of Medical Psychology and Medical Sociology, she has interviewed countless patients over the past decades and subjected them to tests to find out what role psychosomatics plays in the perception of pain and the recovery of chronic patients. “Together with my team, I thus developed a model of pain processing years ago, in which we can assign patients to one of four groups,” explains Monika Hasenbring. This model helps customise diagnosis and therapy approaches to the individual risk groups.

The first group’s response to pain is fear, and members of that group typically interpret it as a symptom of a serious illness. Accordingly, these individuals avoid any situations that could possibly trigger the pain. Inactivity and muscle weakness are the result, which in turn bring about pain and bad mood.

The second group is made up of individuals who suppress the pain – both in their thoughts and in their behaviour. They force themselves to bear up with rallying cries such as “Don’t make a fuss” or “Don’t think about the pain”. A strategy that does not necessarily have a positive outcome, because these patients don’t take their time to relax. This can also lead to an increase in pain.

Members of the third group are patients who can distract themselves from the pain. They manage to maintain a positive attitude. However, as they also tend not to take care of their body, they also often experience an increase in pain.

Only people assigned to the fourth group succeed in reducing their pain through their attitude and behaviour. “These individuals react quite flexibly to the pain,” as Monika Hasenbring describes her findings. “They find a balance between stress and relief and take breaks from time to time, but they don’t avoid physical activity.”

Monika Hasenbring is currently investigating whether this model can also be applied to top athletes suffering from back pain. As part of the nationwide interdisciplinary research network Medicine in Spine Exercise, which was funded by the Federal Institute of Sports Science under the label Ran Back, she compared data from the general population with that of 200 athletes who reported suffering from back pain. The surveys showed that although one might think that top athletes have a special relationship to their bodies, they resemble the general population in terms of their risk factors for the chronification of back pain; they match the same pattern.

It emerged on closer inspection that athletes assigned to groups one and two stated that they perceived pain very intensely. They also felt more affected by their complaints in everyday life than the other two groups. Nevertheless, individuals from group two trained more than the other survey participants. “With these individuals, self-assessment doesn’t match actual behaviour,” says Monika Hasenbring. “We suspect that these athletes had already trained more than others before they developed back pain. Now that they have physical complaints, they feel that their performance deteriorates, even though they are actually still more active than members of the other groups.”

Sport can make you less sensitive to pain

In a follow-up study, which she is currently conducting together with researchers from the USA, Belgium and Denmark, Monika Hasenbring is exploring how physical activity in the form of short sports units, for example riding an ergometer for 15 minutes, affects the pain sensitivity of back pain patients. In healthy individuals, the pain threshold is lowered in such cases, for example triggered by pressure pain. This means that exercise makes them less sensitive to pain in the short term. However, this effect, known as exercise-induced hypoalgesia or EIH effect, is often impaired in patients with chronic pain, i.e. it is either not present at all or the exercise even leads to sensitisation. 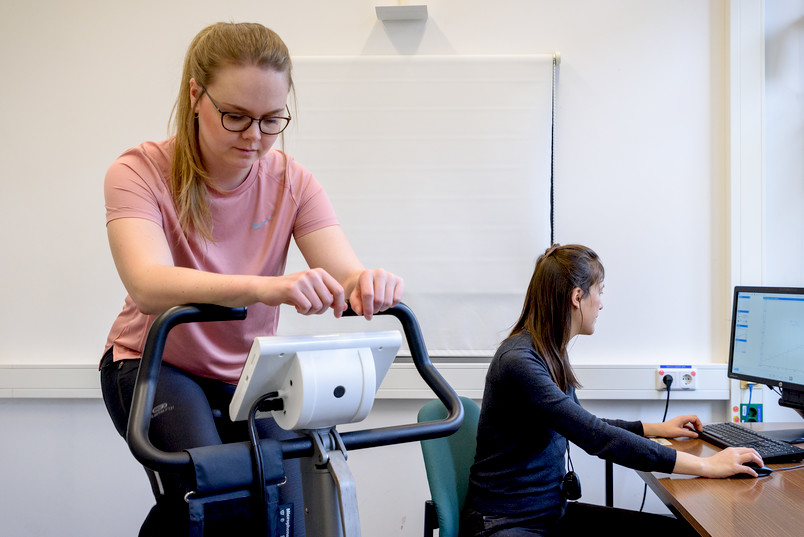 “This is highly relevant for the treatment of these patients,” points out Monika Hasenbring. “They are often prescribed physiotherapy in addition to medication. However, they often discontinue treatment because they find it too painful.” This can have fatal effects on overall therapy.

The researchers now wonder: if psychological or cognitive factors affect the chronification of pain, could they also affect pain thresholds?

Although the study hasn’t yet been completed, the tests to date have shown: “Patients assigned to group three, i.e. who are able to distract themselves and maintain a positive attitude despite the pain, show a higher pain threshold after physical exercise,” says Hasenbring. Patients from group two, who force themselves to bear up and who become irritable, have lower pain thresholds.

We can change the cognitive attitude towards pain through psychotherapy.

“These findings can help those patients, because the cognitive attitude towards pain is something we can change through psychotherapy,” explains Hasenbring. “If we can teach patients to recognise which cycle of thoughts and pain reinforcement they are undergoing, we can also show them solutions for handling the situation.”