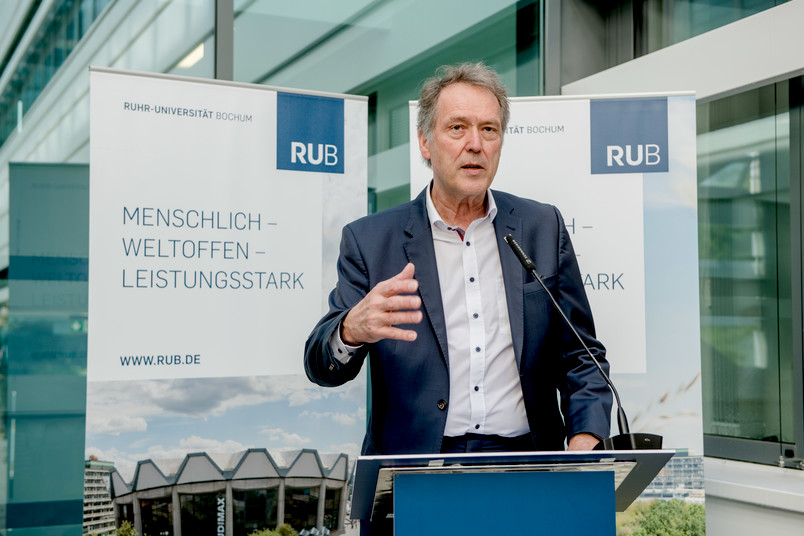 Professor Axel Schölmerich takes an unequivocal stand on the current situation in the USA and on racism.
© RUB, Marquard
University Rectorate

“Understanding racism is a social mandate”

Open letter from RUB Rector Axel Schölmerich on the subject of racism.

The death of George Floyd at the hands of the police has horrified people worldwide. The USA is currently experiencing a wave of protests the likes of which have not been seen since the 1960s. But the country is not alone in this. All over the world, more and more people are taking part in protests. Many people at Ruhr-University have also spoken up against racism.

Today, I am mainly addressing all those people at our university who experience racially motivated discrimination. Here in Germany and also here on our campus. And I would like to outline the measures taken at Ruhr-Universität to combat it.

What is academia doing, what is Ruhr-Universität doing to combat racism?

Hopefully, the media attention on racism is not just a trend that will disappear in the next few weeks. Because the fight against racism must not stop until a stop is put to racism. This is precisely what academia contributes to the fight: it supplies the knowledge that will promote debates on racism and its many different facets in the long term and provide politicians with reliable facts and recommendations to aid their decision-making processes. Ruhr-Universität, too, makes many valuable contributions that make a difference, don’t shy away from a painful subject and bring about changes. I’d like to list three examples of such contributions that have recently gained much attention.

Physical assault in office by police officers has long been the subject of intense public debate. The Chair of Criminology at the Faculty of Law at RUB is currently conducting a research project investigating illegal police violence in Germany, especially from the perspective of the victims. Bochum-based criminologists Professor Tobias Singelnstein and Professor Thomas Feltes are renowned experts in this field. Their findings and assessments are also frequently quoted in the current debate on racial profiling and racially motivated police brutality: “The police force is a highly heterogeneous institution that employs many people with noble motives on the one hand, but on the other hand also attracts people who have a racist attitude from the outset or develop one in the course of their career,” as Tobias Singelnstein said in an interview with the regional newspaper NRZ on 3 June 2020.

The Bochum-based academics’ research on police violence and racist behaviour in the police force has always been well received by the public. Much more difficult are issues that shed light on racism in everyday life, where we don’t really expect it.

“Well, there are a lot of racist things going on in the teachers’ room, in the classroom, in the textbooks, but nobody wants to talk about it. Or at least those who have the power in the teachers’ room, in the classroom, they don’t want to talk about it, because they believe it has nothing to do with racism,” as RUB Professor Karim Fereidooni said on Deutschlandfunk radio on 4 June. He is junior professor for Didactics of Social-Scientific Education at Ruhr-Universität Bochum and has been researching into the issue of racism in educational institutions for many years. He is one of the few academics in Germany who is committed to entrenching the criticism of racism more firmly in teacher training.

I believe that Karim Fereidooni has hit a nerve. For one, because teachers naturally have considerable influence on the self-perception of racism in the younger generations. But also because those people who typically work in educational institutions – and this includes us too – are all too willing to believe that they are free from racist attitudes and behaviour or even from “only” an unconsciously discriminatory use of language. The ability to encourage and demand self-reflection is fundamental. I hope that Karim Fereidooni will be joined by many allies arms and that his research makes an impact in society.

Racism in the USA and in Germany

The oppression of African Americans in the USA has a long history. RUB historian Professor Rebecca Brückmann has made research into this history a priority. In an interview in the newspaper Hannoversche Allgemeine on 7 June, she also discusses racism in Germany, to which she is personally exposed time and again.

“If we look at discrimination in the housing market, for example, the experience of people of colour in Germany it pretty much the same as in the USA. Also, we do have fatal cases of police violence against black people here. This is why I find it astonishing how the USA is now discussed in Germany: they are deeply racist, whereas Germany is handling everything well, has learned from the Holocaust and is now in the position to give tips. This attitude is quite problematic.”

She describes her personal experiences as follows: “When I enter Germany, my passport is always examined longer than anyone else’s, and I have to prove that I do speak German. The police always address me in English, because they can’t imagine that someone who looks like me can be German. And “racial profiling” does exist in Germany, too. For example, when I’m sitting in a car with several black people that car will be stopped, or on a train people who don’t look German have to show their ID.”

In her historical analysis of the reasons for racism in the US, she also discusses the political stance of Donald Trump. Her words couldn’t be clearer: “Trump is a fascist. There’s no doubt about that, as the last years and especially the past few days have shown. He has authoritarian ideas about the organisation of society and he praises violence.”

How political can academia be?

Understanding, exposing and denouncing racism is not a question of political attitude. It is a social mandate for the functioning of a pluralistic society that is rooted in our constitution. I would therefore like to encourage everyone on campus to take action against racism in their area of responsibility – first and foremost those academics whose voice is heard in public.

I am both glad and proud that we at RUB have many such voices from the academic community that haven’t merely jumped on the current debate, but have long been making valuable contributions. However, while we provide academic expertise on various forms of racism, the question remains what we do against racism on our campus.

“RUB bekennt Farbe” (RUB shows its colours), the cooperation project between AStA (general students’ committee) and the Rectorate, sends a powerful signal against racism. Moreover, RUB has implemented effective measures for the integration of refugees with the DAAD-sponsored initiative “University without Borders”. In addition, we have been running the project “Our Campus” together with the academic services office Akafö since 2018. I would like to encourage everyone on campus to support these initiatives, where both new helpers and new ideas are very much welcome and necessary. Furthermore, you all have the opportunity to take a stand against racism in RUB committees and interest groups.

Still, I am aware that this is not enough. There are hardly any studies in Germany that systematically investigate racism at universities and its ramifications. It is a blind spot. We have no such study, either. We know far too little about experiences of racism in everyday life at university, which many of you have to suffer through.

Diversity and tolerance are more than just noble values. They are the foundation upon which a free and efficient science can cope with the global challenges of our time. Authoritarian thinking and racism destroy science. It is therefore high time that we also use RUB’s academic expertise on racism issues to fight racism on our own campus. I also firmly believe that it is necessary to establish an office dealing with the concerns of people who experience discrimination.