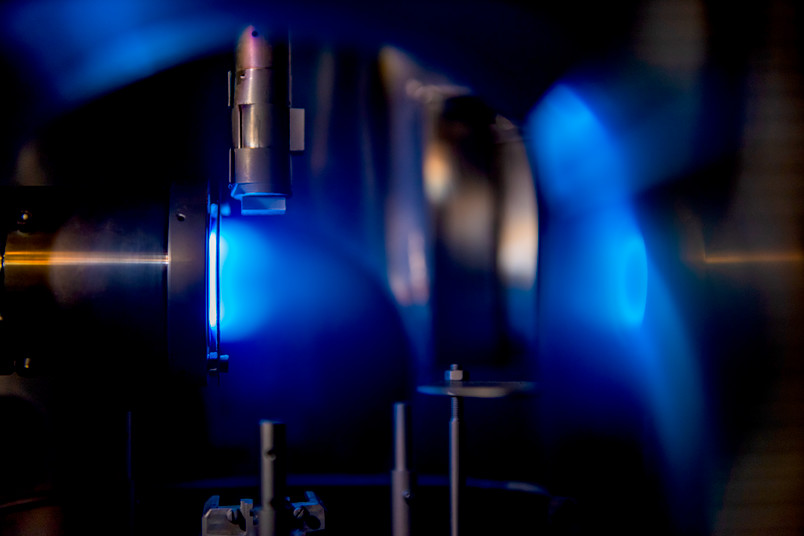 The gas inside the plasma chamber is ionized and starts to glow.
© Damian Gorczany
High-performance plasmas

Once the inhomogeneous character of plasmas became apparent, not everyone was pleased. However, this characteristic has some advantages, for example for the industry.

They are often invisible to the naked eye: the wafer-thin layers that are deposited on surfaces with the help of plasmas. For example, on architectural glass to control its reflectivity, on tools to protect them from wear and tear, or on plastics to make them more impermeable to gases. Plasma coatings have become indispensable in industrial applications. While surfaces can also be coated using chemical processes, this would sometimes require such high temperatures that the coated objects would melt. Plasmas, on the other hand, generate the required energy not through heat, but through the reactive particles they contain.

Plasmas are called the fourth state of matter: in the solid phase, their molecules occupy solid places, whereas there is some freedom of movement in the liquid phase and a lot of more freedom of movement in the gas phase. If more energy is supplied to a gas, the molecules break up and can also be ionized, a plasma is created. The negatively charged electrons separate from the positively charged atomic nuclei and turn them into ions. These free electrons and ions can be accelerated by electromagnetic fields. If the fast electrons collide with other molecules, they can change them in turn by ionising or breaking them down. This process can result in different, sometimes short-lived reactive neutral particles and ions that may be useful for a variety of applications.

In a plasma, matter is partially or completely ionised. By applying electric fields to electrodes in a plasma chamber, the introduced gas, such as argon, can be ionised and the charged particles are accelerated towards a metal electrode. The ions impinging on the metal knock individual atoms out of the material, which are then deposited on a workpiece that is located across from it and is to be coated. The team of the Collaborative Research Centre SFB/TR 87 explores what exactly happens in the plasmas during such coating operations. The researchers have been studying the underlying processes for years.

Hype and valley of tears

“At our Collaborative Research Centre, we experienced both the hype surrounding high power pulsed plasmas for superior coatings a good ten years ago and the subsequent deep valley of tears,” recalls Professor Achim von Keudell, who holds the professorship for Experimental Physics of Reactive Plasmas at RUB. In 1999, the so-called High-power Impulse Magnetron Sputtering was established. The process uses fully ionised plasmas whose surfaces have a power density that pretty much equals that of rocket engines. In contrast to conventional plasmas, these high-power plasmas can’t be operated continuously, because they would destroy the materials of the plasma chamber. Therefore, they are repeatedly switched on and off, i.e. run in pulsed mode.

These dense plasmas can also be used to produce correspondingly dense high-quality coatings. Consequently, this technology immediately sparked interest in the industry. “Then, disillusionment hit,” says von Keudell. This is because the higher quality of the layers came at the expense of the coating rate, which in some cases was only 30 percent of those achieved by traditional processes at the same electrical power input. 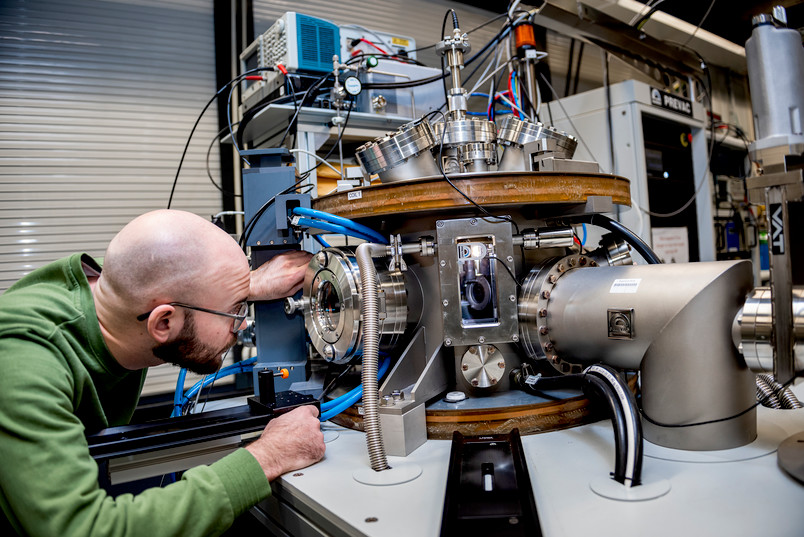 In this reactor, the team of the Chair for Experimental Physics II can create a high power plasma.
© Damian Gorczany

While conventional processes mainly use uncharged atoms, radicals or molecules for coating, high-performance plasmas primarily produce ions. Since the particles are charged, they are heavily affected by external and internal electric fields. Due to the direction of these electric fields, a large proportion of the ions that travel towards the workpiece simply turn back halfway and fly back. This phenomenon is called the return effect and can’t be circumvented because it is simply due to the property of fully ionised plasmas. “For ten years, the plasma community has been struggling and failing to achieve both a high-quality layer and a high growth rate. It doesn’t work, you have to decide which is more important depending on the application,” elaborates von Keudell.

However, a larger number of the ionised particles make it to the other side through the electric fields and settle there as a layer than one would expect according to simple plasma models. This is thanks to another phenomenon that the Bochum team has now researched in depth: although the high-power plasmas look very uniform when viewed with the naked eye, they actually contain structures that help the ions to get to the other side.

Viewed from above, the plasmas are toroidal, they resemble a glowing donut. This glow of the excited particles forms structures that move in circles at ten kilometres per second and can only be detected by high-speed cameras. “One of the first structures we observed in an aluminium plasma at that time looked like a comet flying backwards,” describes Achim von Keudell. In subsequent analyses, the Bochum-based researchers found that different structures were formed, depending on the type of plasma. In a titanium plasma, for example, not a single comet is formed, but rather something that looks like a croissant. The number of structures in the torus also changes depending on the plasma conditions. Because of the regularity and rotation of the structures, the term “rotating plasma spokes” has been adopted.

The description of these inhomogeneities in technical plasmas caused a stir in the research community, especially among scientists working in applied fields. Today, Achim von Keudell is convinced: “It was probably unfortunate that we basic researchers spoke of inhomogeneities or instabilities. A process engineer doesn’t like the sound of that.”

It turned out that although these structures are created by instability at the beginning of each plasma pulse, the final structure is very stable. Structure formation is an essential property of high-power density plasmas and can’t be entirely prevented, but it doesn’t pose a problem for coating processes, either. On the contrary, it even helps to mitigate the return effect. Without the inhomogeneities, there would be no efficient layer growth at all in fully ionised plasmas, because many ions deflected by the electric fields would never reach the surface.

Because the luminous plasma spokes are electrically charged, they don’t interlock; once the structure is formed, it is stable. And because it moves at high speed, it does not affect the coating finish. Only under certain conditions can the structures freeze in their motion, which would indeed lead to an uneven coating. “In the meantime, however, we have understood the plasmas to such an extent that we know how to choose the parameters to prevent such an outcome,” says Julian Held, PhD researcher at the Chair of Experimental Physics II. “We can even specifically grow certain structures in the lab.”

Julian Held has perfected the method. He developed a technique that allows him to analyse structures in a plasma synchronised with high-speed cameras. Thus, he can also render the different plasma components visible separately from each other, such as the glow of certain atoms or ions, and correlate their movements in time and space. “For years, we had tons of individual images but never knew how to superimpose them,” Held recalls. “This project was an essential step in creating detailed plasma models.”

In materials research, including at RUB, novel coating materials are being developed that can be applied to different objects with the help of plasmas. Metal tools, for example, can be protected from wear and tear by ceramic coatings. How high the quality of a coating is depends on the energy of the ions and atoms that impinge on the surface of the coated object. The energy of the ions is often 100 to 1,000 times higher than that of the atoms. With high-performance plasmas, which have a high ion content, metastable layers of two or three different elements can be deposited; this would not be possible in an ordinary crucible – i.e. without plasma support.

The quality of a layer can be controlled primarily by the energy of the particles that are incorporated into the layer. This, in turn, can be adjusted by the energy of the ions in the plasma. The percentage of ions is very high, especially in plasmas with high power density; this makes it easy to control the layer quality.