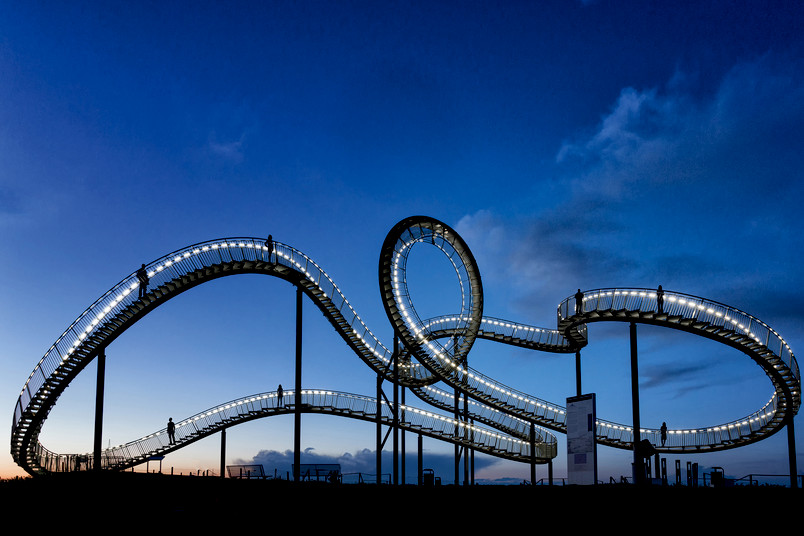 Science in the Ruhr region, symbolized here by Tiger and Turtle in Duisburg, is receiving a further boost.
© hagenvontroja
Change Through Science

75 Million Euros to the UA Ruhr for New Research Centers

The state of North Rhine-Westphalia will be funding the Bochum, Dortmund, Duisburg and Essen sites in the coming years.

The University Alliance Ruhr (UA Ruhr) is set to significantly expand its cutting-edge international research efforts. On Wednesday, 17 March, the state government announced its plans to support the alliance in establishing four research centers and a college as part of the Ruhr Conference. This will involve Ruhr-Universität Bochum, TU Dortmund University and the University of Duisburg-Essen consolidating their long-standing cooperation under one new roof – the Research Alliance Ruhr.

The state government announced last November that it wanted to set up new, innovative research centers at the UA Ruhr and finance them over the long term in order to promote structural change. The three universities then presented the overall concept of the project in December to a team of experts put together by the German Council of Science and Humanities. The team voted overwhelmingly in favor of the joint project, confirming not only its outstanding scientific quality but also the enormous added value it could bring to the scientific hub of the Ruhr region and beyond. A sum of up to 75 million euros is now being invested in the construction over the next four years, with the buildings set to be fully operational by 2025.

Ruhr University Bochum, TU Dortmund University and the University of Duisburg-Essen have been closely collaborating as strategic partners under the UA Ruhr umbrella since 2007. By joining forces, these partner universities are able to systematically enhance their performance. Under the motto “Better Together”, there are now over 100 collaborations being conducted in research, teaching and administration. With more than 120,000 students and almost 1,300 professors, the UA Ruhr is one of the largest and most productive scientific locations in Germany.

With these new research centers, the three universities are pooling their expertise in areas in which they are already conducting internationally renowned, cutting-edge research. The four research centers will deal with future-oriented issues in engineering and the life and natural sciences. The Chemical Sciences and Sustainability center will focus on sustainable solutions based on chemistry, while the center for Trustworthy Data Science and Security will deal with data security. The center for Future Energy Materials and Systems will be dedicated to questions of energy technology, and the One Health center will comprise a holistic approach to research into human health. A college will in turn be established for the humanities and social sciences, which will promote international exchange through research stays.

With these new structures, the Ruhr region is becoming more appealing for scientists from all over the world.

“With these new structures, the Ruhr region is becoming more appealing for scientists from all over the world who want to address the pressing questions of the future,” said Professor Axel Schölmerich, Rector of Ruhr-Universität Bochum. His colleague in Dortmund Professor Manfred Bayer added: “The entire region will benefit because research generates innovative ideas for practical applications – for large companies as well as for startups.” “The fact that the Ruhr Conference is now sponsoring the UA Ruhr confirms one of our guiding principles – collaboration pays off,” said Professor Ulrich Radtke. The Rector of the University of Duisburg-Essen is one of the founding fathers of the UA Ruhr, which began in March 2007 with the signing of a cooperation agreement between the three partner universities.

A new coalition of innovation.

Minister-President of North Rhine-Westphalia Armin Laschet called the project “a new coalition of innovation”. Minister of Culture and Science Isabel Pfeiffer-Poensgen said that the state government wants to “take the Ruhr Area’s international reputation as an excellent scientific region to a whole new level” with this decision. Dr. Stephan Holthoff-Pförtner, Minister for Federal, European and International Affairs and leader of the Ruhr Conference, emphasized that the Ruhr Conference was established to harness the potential of the metropolitan region on a broad front: “The new research centers show we are making good progress.”

Before the actual implementation can begin, the recommendations of the expert team appointed by the Council of Science and Humanities must first be evaluated in detail.

The Ruhr Area – a region of the future

The Ruhr Conference is an initiative launched by the state government to shape the Ruhr metropolitan area into a prosperous and desirable region of the future for all people. In 2019, over 50 events were held to gather ideas, with the state government offering advice with regard to funding. Of all the suggestions, the proposal to establish research centers with a strong international standing across various locations at the UA Ruhr came out ahead. Other projects are already being funded at the UA Ruhr as part of the Ruhr Conference initiative under the mission statement “Ruhr Region of Opportunity”, such as talent scouting or the InnaMoRuhr research project that aims to improve sustainable mobility across the four university locations.