The fluctuations in the measurement curves indicate ground motion from a seismic event.
© Damian Gorczany
Geosciences

It is not uncommon for the earth to shake in the Canadian province of British Columbia. But the incident in the summer of 2015 still made headlines. The quake, which was not of natural origin but human induced, reached a magnitude of 4.6. Hydraulic fracturing, or fracking for short, is used in western Canada to make the rich natural gas and oil deposits accessible. Time and again, this practice causes minor earthquakes. According to media reports at the time, the 2015 incident was the strongest hydraulic-fracturing-induced earthquake worldwide to date. Today, China’s Sichuan Basin holds this new record with a magnitude 5.4 quake.

“Earthquakes with a magnitude greater than 4 can cause damage to nearby infrastructure,” says Professor Rebecca Harrington, who heads the Hydrogeomechanics Group at the RUB Institute of Geology, Mineralogy and Geophysics. “In British Columbia, the tolerance for these quakes is relatively high, because many people who live there work in the oil and gas industry. However, tolerance has decreased in recent years as the number of potentially damaging earthquakes has increased.”

With her team, Harrington is researching the causes of seismicity in various places around the world, including western Canada, along with collaboration partners at McGill University in Montreal. Her goal is to fundamentally understand how earthquakes occur underground and what role the present geological conditions play in the occurrence of seismic activity. To this end, the researchers evaluate data from natural and human induced earthquakes.

For us, the hydraulic fracturing process is something like a scaled-up laboratory experiment.

One of many data sources her group uses are recordings of earthquakes triggered by hydraulic fracturing in a roughly 50-by-50-kilometre area in western Canada. Such studies provide scientists with insights into what happens underground during the fracking process. Moreover, they can also deduce how the subsurface would react to changes in stress under natural conditions. “For us, the hydraulic fracturing process is something like a scaled-up laboratory experiment,” explains Rebecca Harrington. “We see what happens when the subsurface is exposed to controlled stress conditions – under natural conditions changes in stress would be much more difficult to study.”

Hydraulic fracturing can be used to tap oil or gas deposits that lie deep underground. A mixture of water, sand and weakly concentrated hydrochloric acid is injected into the ground at high pressure to create cracks in the rock and make it permeable to the gas or oil. This is done by drilling vertically into the subsurface to reach the depth of the oil and gas deposits. Once the borehole reaches the rock units containing oil and gas, the well is drilled one to two kilometres in a horizontal direction. This horizontal borehole is divided into segments, each 50 metres long, and the hydraulic fracturing fluid is pumped into each segment in turn until networks of cracks form in the rock. The fluid is then recovered, albeit not completely, and then disposed of by pumping it into a specially constructed disposal well. The hydraulic fracturing process itself, the fluid movement underground, and the wastewater disposal can all trigger earthquakes. 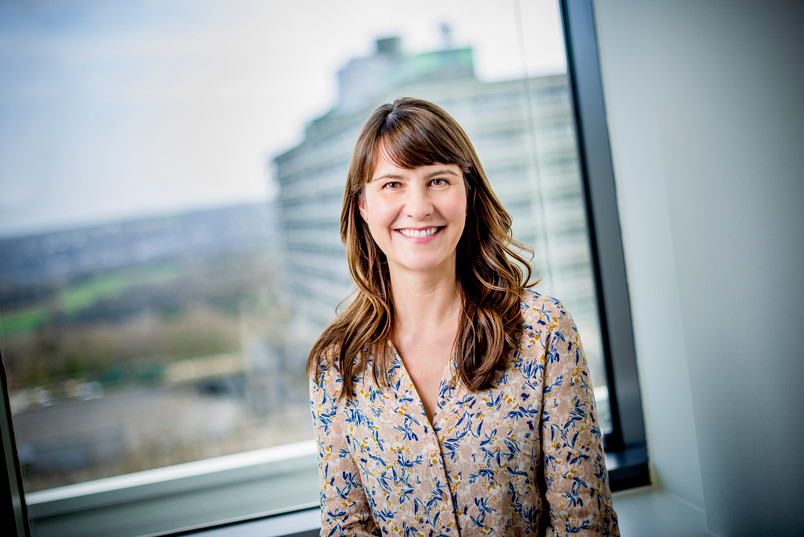 Rebecca Harrington leads the Hydrogeomechanics Group at the RUB Institute of Geology, Mineralogy and Geophysics. Previously, she worked at McGill University in Canada, where she is still cooperating today.
© Damian Gorczany

“In the Western Canada Sedimentary Basin, the earthquakes are caused by the injection associated with the hydraulic fracturing treatment itself, unlike in the central and eastern US, for example, where wastewater disposal is the trigger,” explains Rebecca Harrington. “In western Canada, however, much smaller volumes of fluid are being used. There’s no good explanation as to why the earthquakes occur there when there’s typically so little fluid involved.”

In 2018, a magnitude 4.5 quake occurred very early in the hydraulic fracturing process, when relatively little fluid had been injected. “The fact that the earthquake occurred so early on in the process shows that fluids are moving underground in ways we wouldn’t necessarily expect,” says Harrington. The RUB team analysed this earthquake and several of its aftershocks, the largest of which still reached magnitudes of 4.2 and 3.4, together with colleagues at McGill University. The two institutions have set up 17 seismic stations in the Western Canada Sedimentary Basin and have thus access to a comprehensive data network. 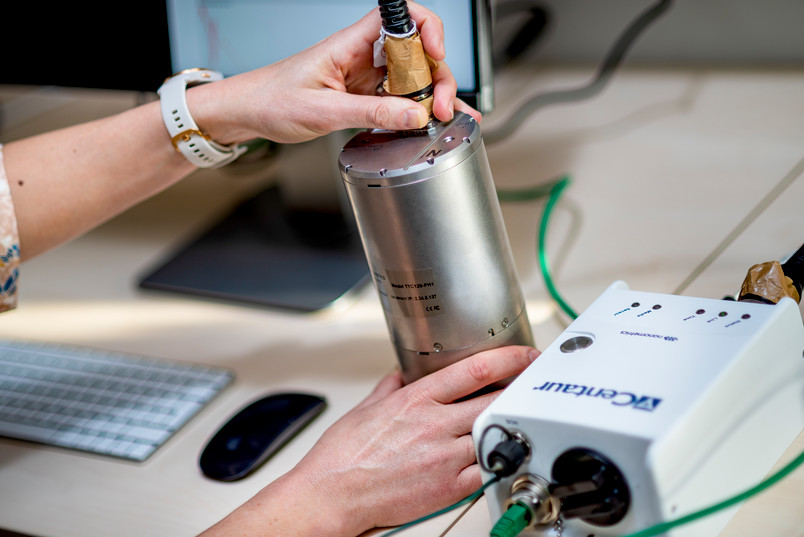 The team from RUB and McGill University has deployed 17 such measuring devices in western Canada to record seismic activity.
© Damian Gorczany

Using these records, the scientists reconstructed the sources of the various earthquakes and how they spread underground. They linked the data with information about the hydraulic fracturing process and the nature of the subsurface. By means of computer simulations, they modelled the forces that acted in the subsurface during the earthquakes. The conclusion: “Presumably there was a geologically young fault zone in the subsurface, i.e. a network of fractures in the Earth’s crust, which acted as a natural pathway for fluids. The hydraulic fracturing fluid could then flow through the fracture network like a channel,” as Rebecca Harrington describes the process. The fluid flow thus quickly reached an underlying fault, which disturbed the stress structure in the subsurface and triggered an earthquake that was stronger than expected.

Many other studies have also confirmed that earthquakes can be caused directly by the interaction of fluid flow and naturally occurring faults in the subsurface. On the other hand, accumulation of fluids can also impact the stress field in the subsurface in such a way that faults in the neighbouring rock are caused to fail. “People often assume that earthquakes occur when injected fluid creates cracks in the rock and the seismic activity created by the cracks propagates underground,” says Rebecca Harrington. “This is certainly the cause sometimes – but not always.”

The RUB and McGill University research groups have begun analysing around 8,200 earthquakes recorded by seismic stations in the Western Canada Sedimentary Basin between July 2017 and September 2020. They showed that many earthquakes occur at locations where natural geological faults exist in the subsurface with which fluids interact. The scientists also proved that these faults are optimally aligned in the stress field of the Earth’s crust to trigger earthquakes. “The earthquakes do originate from industrial activities, but once initiated, the geological faults behave pretty much like an earthquake of natural origin,” points out Harrington.

Induced and natural earthquakes resemble each other

The researchers also compared earthquakes caused by fracking and those from natural causes in another study. Specifically, they were interested in a physical parameter known as stress drop, which plays a role in earthquakes. On both sides of the many faults in the Earth’s crust, stresses build up over time due to the movement of the tectonic plates. Once the stress is very great, it discharges in the form of a jerky tremor. The larger the fault, the more energy is released and the stronger the resulting quake. 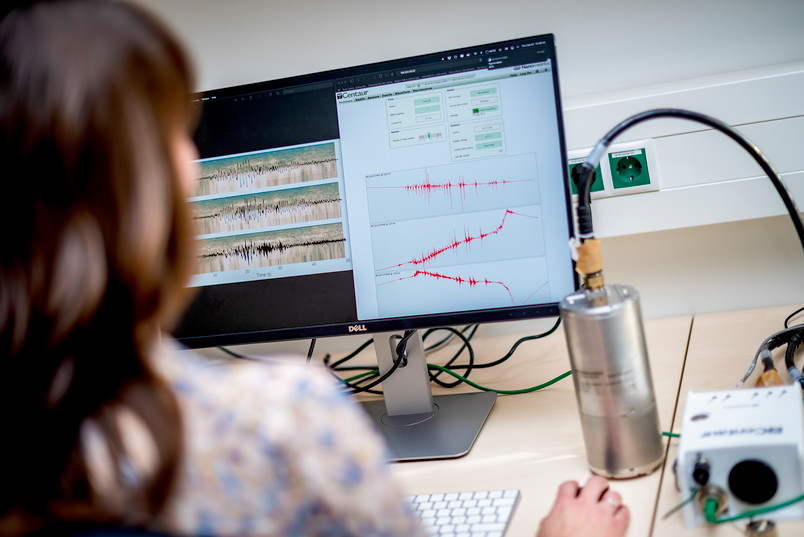 Using seismic recordings of human induced and natural earthquakes, the researchers study the processes in the subsurface.
© Damian Gorczany

Researchers use stress drop to describe the difference in stress before and after an earthquake along a fault, with the value being averaged over the entire area of the fault. For natural earthquakes, it is fairly well known that the stress drop is constant between about one and ten megapascals, and is independent of the size of an earthquake. However, the value correlates with the seismic energy released during an earthquake. This means that the energy released can be calculated from the stress drop and the size of a quake – and it is possible to estimate how much damage a quake of a certain strength would cause.

Rebecca Harrington’s team set out to establish whether the stress drop is also constant for induced earthquakes. “We observe a lot of smaller earthquakes induced by hydraulic fracturing, mining, or other triggers,” she explains. “It’d help us if we could estimate how much seismic energy would be released in larger earthquakes based on our data on these quakes, because it would also allow us to better estimate the extent of potential damage.” For this, the researchers need to know if the stress drop is constant. The study found that the value for earthquakes near boreholes is lower than for quakes that occur at least one to two kilometres away from the borehole. The latter behaved very similarly to natural earthquakes. Like all of Rebecca Harrington’s research on induced earthquakes, this study was designed to fundamentally gain more knowledge about subsurface processes in order to understand natural earthquakes.

Everything we learn about induced earthquakes can also help us understand natural earthquakes.