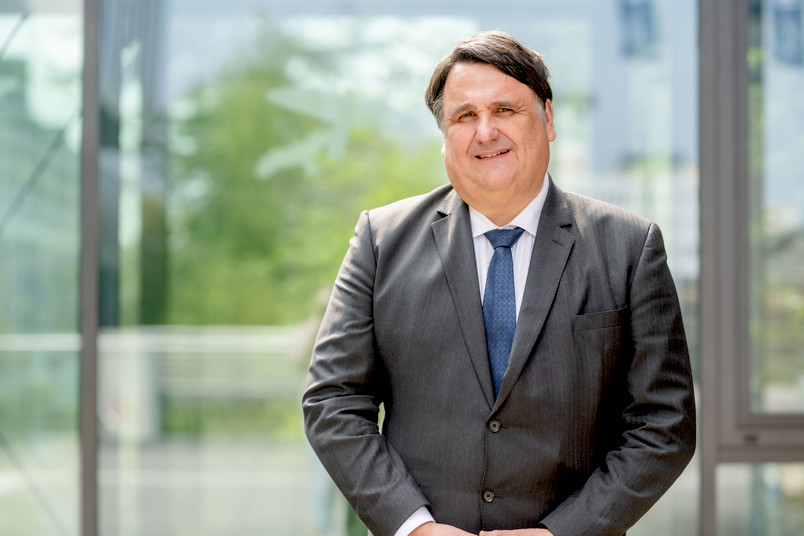 Martin Paul, President of Maastricht University, has been elected as the new Rector of RUB.
© RUB, Marquard
RUB has cast its vote

The renowned physician and President of Maastricht University is coming to Bochum in autumn 2021. In the history of Ruhr-Universität, he will be the first non-RUB member to assume the office of Rector.

“With Martin Paul, we are gaining a highly renowned academic with an international network and extensive experience accumulated in Heidelberg, Harvard, at the Charité in Berlin and as university manager and long-standing President of Maastricht University. With his impressive grasp of RUB’s strategic fields of action, he will take the university further along its path to success. I am confident that he will do a great job of leading RUB into the upcoming nationwide competition of the Excellence Strategy,” says Birgit Fischer, Chairperson of the RUB University Council and the search committee for the Rector election. Professor Paul was elected for a term of six years.

“The unanimous vote of the search committee and the very clear election result speak for Martin Paul’s leadership and communication skills,” says the deputy chair of the committee, Professor Dr. Isolde Karle. “With his charisma, he will unite and inspire all university members alike.”

“We are convinced,” points out Professor Dr. Jörg Bogumil, Chairman of the Senate, “that we have gained in him a personality who, together with all RUB’s members, will successfully cultivate the university’s profile in the international academic landscape, in the region and in society.”

“I am honored that the Ruhr-Universität Bochum has elected me as its Rector and am pleased to be able to employ my experience in Maastricht and other international academic systems in Germany,” says Martin Paul. “For me, it is an exciting challenge to contribute to the goals the university has set for itself, building on the solid foundation that distinguishes RUB: an internationally recognized university with strong ties to its own region and a will to innovation and reform.”

“First, I congratulate Martin Paul on his successful election as the next Rector of Ruhr-Universität. Second, I also have the pleasure of congratulating my university on gaining a truly outstanding personality for this office,” says Rector Axel Schölmerich. “Martin Paul enjoys a stellar international reputation as an academic with a wide range of experience in the university system. In light of this, his commitment to shaping the RUB’s ongoing development proves our unique potential for an excellent future.”

From Maastricht to Bochum

While working at Maastricht University, Martin Paul has made a huge impact on the development of the Maastricht region, helping transform it into a unique centre of education and culture that attracts international students and start-ups. This experience is of particular value for the Ruhr region, which is on its way to becoming one of the leading science hubs.

Martin Paul, born in Saarland in 1958, has been President of Maastricht University in the Netherlands since 2011. Since 2016, he has been a member of the expert committee of the German Excellence Strategy. From 1997 to 2008, he was Professor and Head of the Institute for Clinical Pharmacology and Toxicology at the Free University of Berlin, University Hospital Benjamin Franklin, and from 2003 at the Charité Universitätsmedizin Berlin. In 2008, he accepted the appointment to the Faculty of Health, Medicine and Life Sciences at Maastricht University. Before he was elected President, his roles included dean of his faculty and vice-president of the university.

As a researcher, he has contributed significantly to a large number of scientific publications; more recently he has been focussing on university strategy and creating innovative structures for research and education. His experience in management and leadership positions is longstanding and profound, proven among other things by numerous functions and memberships in academic networks.

Martin Paul studied human medicine in Heidelberg from 1978 to 1985 and received his doctorate there. He is a medical specialist in clinical pharmacology and hypertension (high blood pressure). He is married and has two adult children.

How the election was held

The Rector is elected by the University Election Assembly, which is convened to elect and remove members of the Rectorate. The members of the University Council and the RUB Senate belong to this body. The introduction of Martin Paul and the election took place during a public session, and RUB members were able to follow the proceedings via a stream on 29 April 2021.

Prior to this, a search committee had defined the requirements profile and the selection criteria, advertised the position and approached potentially suitable candidates, both in-house and third-party. Following interviews with all candidates, the search committee unanimously proposed Martin Paul for election as Rector to the University Election Assembly. This vote was followed by a large majority vote of the university electoral assembly after the candidate was publicly introduced to the university.