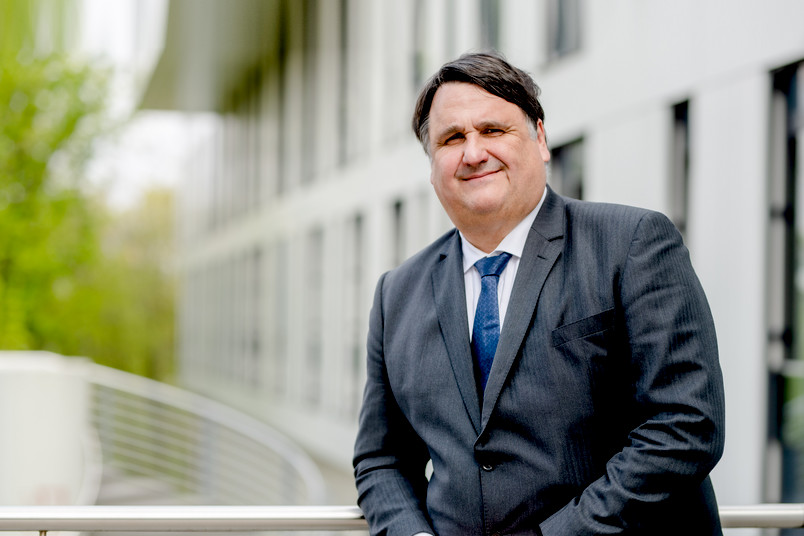 “I never planned to become an academic”

And other plans and secrets of the future Rector at Ruhr-Universität.

As soon as Professor Martin Paul has been elected as the new Rector, he enters into dialogue with the people at Ruhr-Universität. In our interview, the renowned researcher and (still) President of Maastricht University talks about his role models, what position he would play in football, why he considers Bochum to be one of the most exciting universities in Germany and what he has planned for his term of office starting in November 2021.

At 17, you still have dreams. What was yours?
I actually wanted to become a doctor because I’m good with people. But you can’t plan everything in life. I had a professor in Heidelberg who involved us students in his research wherever he could. He was all about the cause, everyone could participate and was appreciated. That opened the door to research for me and so I took this path. Later, too, it was always such chance encounters with role models that inspired and guided me.

In my doctoral supervisor’s lab, the philosopher Karl Popper was required reading.

What would be your advice to young people today to find their way?
I would advise them to follow their instincts, connect with people and seize opportunities. Some already have clear ideas about what they want to study. But many don’t know yet. I’ve always found programmes to be very good that allow students to try things out and develop their talents. With a diversified Bachelor’s degree modelled on the Liberal Arts and Science Colleges in the USA. I would also like to discuss this for Bochum.

In my doctoral supervisor’s lab, the philosopher Karl Popper was required reading. One of his maxims is: “Optimism is a moral duty. One must concentrate on the things that are to be done and for which one is responsible”. This philosophical input has shaped the rest of my life at least as much as my academic studies.

You have achieved a lot in your career. What has been your most gratifying experience so far?
Definitely being elected President of Maastricht University. For one thing, the office as such is a great honour. But on top of that, I became the first German president of a Dutch university, and that was by no means a matter of course. One must not forget that the traumatisation caused by the Nazi crimes still reverberates in the Netherlands. When I was allowed to lay a wreath as my first official act on Remembrance Day on 4 May to commemorate the Dutch war victims since the beginning of the Second World War – that probably moved me the most of all professional experiences.

I find the Ruhr-Universität’s founding history in a post-industrial region particularly appealing.

Why did you choose Bochum and the Ruhr region?
I find the Ruhr-Universität’s founding history in a post-industrial region particularly appealing – there are definitely parallels to Maastricht. This creates a unique culture of innovation, the drive for change that is firmly entrenched at Ruhr-Universität Bochum, which was founded as a reform university.

Then there is the straightforward nature of the local people. People quickly get talking in the Ruhr region. That is something I appreciate very much. This unique spirit in Bochum struck me as something very positive when I was a member of the review committee in the recent Excellence Round. Even if Bochum narrowly failed to make it: RUB stands out and is one of the most exciting universities in Germany.

The Ruhr region as a whole is also one of the densest academic and research regions in Europe and boasts enormous potential. I find it much more interesting to help develop this potential than to go to a more or less saturated university. If I were a football coach, I could never coach FC Bayern München. I would rather want to lead a team of talents to the top.

Let’s stick with the football metaphor: Do you have the mentality of an attacker?
No. My father was a talented footballer and even a centre-forward in the Saarland national team. But I don’t have the talent for that. And if I did, I would probably play in midfield, as someone who builds the game up from the ground up. Talking about football in the Netherlands: The “football total” attitude – I never enjoyed it that much. Playing for 75 minutes with maximum pressure – but in the last 15 minutes you might run out of steam and lose. I prefer a careful and well thought-out strategy in the match set-up. This is also my approach to running a university. It all comes down to staying power, and in the end, you have to have enough credits in your account.

The most important thing about a university is its people.

In your speech to the election assembly, you presented a broad concept of fields of action for your future rectorate policy. Which do you consider to be the most important?
The most important thing about a university is its people. And that means all people: students, lecturers and researchers, but also the so-called non-academic staff. I consider the university to be an academic community. Integrating all these talents in their diversity, identifying new ones, promoting them and creating a sense of community is the basis for everything. And you don’t achieve any of this through decrees from above, but through participation. Even beyond established participation processes, I can imagine completely new ways, such as so-called town hall meetings, in which students in particular are involved in strategic projects, for example on the subject of sustainability. That’s why one of my first meetings here was with the Asta and a question and answer session with students, in order to get talking straight away.

What kind of sustainability measures have been developed by students in Maastricht?
In Maastricht, the whole idea of sustainability is primarily shaped and driven forward by the students through a Green Office. They’re doing a great job. Their strategy is comprehensive and geared to the Sustainable Development Goals. And because students want to see results before graduating, something comes out of it. One example are new study programmes such as the Bachelor’s programme circular engineering, in which the engineers of the future are also trained as sustainability managers.

What challenges do you foresee with regard to diversity and inclusion?
In order to live the ideal of the university community, the culture of diversity is crucial. It must encompass all essential aspects: gender, age, ethnicity, physical and mental abilities, religion and sexual orientation. Above all, the goal is to ensure career paths through diversified support measures. A major challenge continues to be the so-called leaky pipeline – i.e. the decreasing proportion of women over the course of a career. As far as I’m concerned, Bochum is already well positioned in diversity issues. But it is important to constantly evolve and to recognise trends. Just think of the Black Lives Matter movement or the decolonisation of the curriculum.

Excellence should be a guiding principle that includes everyone and excludes no-one.

RUB is a university with a strong research record and is striving for Excellence status. What can we do to achieve it?
First of all: For me, excellence has primarily to do with quality, and not with elitism where the excellence label is carried before you like a monstrance. Excellence should be a guiding principle that includes everyone and excludes no-one. RUB has many of the characteristics of an Excellent University: extensive third-party funding, numerous Collaborative Research Centres, ERC Grants and, last but not least, two Clusters of Excellence.

But excellence is not only measured in individual successes, which are already excellent. You have to look at the whole picture. As a comprehensive university, it is important to promote research in all areas in a differentiated manner. The commitment to the DORA guidelines (Declaration of Research Assessment), which measure academic performance more comprehensively and fairly than just in citation rates, is a good approach. On this basis, it is important to continuously strengthen strengths and compensate for weaknesses. The RUB’s wide range and diversity offer the best opportunities for interdisciplinary and transdisciplinary approaches in order to continually develop new research foci for the great challenges of our time.

Bochum, with its enormous breadth of disciplines in the humanities, has the best prospects in this regard.

Traditionally, humanities are strongly represented at RUB. However, they cannot always be integrated into the logic of research cooperations that produce transfer effects …
Knowledge is of course a value in itself, including knowledge in individual research in humanities and in so-called rare subjects. The point here is to be independent and innovative in your field. In Maastricht, we succeeded in making the humanities much more visible and successful, both in transdisciplinary research and in individual research. This enabled us not only to highlight their social importance, but also to strengthen their role in the university’s subject canon. Bochum, with its enormous breadth of disciplines in the humanities, has the best prospects in this regard – and also a promising track record, for example in religious studies.

In your opinion, how important is the proximity to the political and business communities in the Ruhr region?
The post-industrial environment in which Ruhr-Universität is embedded must be an incentive to work together with the public and private sectors for the good of the region. And this is already happening here to great effect: the Worldfactory Start-Up Center, the transformation of the former Opel site into Mark 51°7, as well as the promotion of the new Research Centres within the Ruhr Alliance – all these are outstanding examples of change through academia in cooperation with the public sector and the private sector.

One vision for RUB should be to grow into an international network university.

You are very much oriented towards the international arena. How do you intend to promote the internationalisation of RUB?
One vision for RUB should be to grow into an international network university. I have spent a lot of time on this topic over the last five years and have established contacts worldwide that I would now like to use for RUB. Such networks are stimulating and helpful in every respect. One example: when we wanted to digitalise teaching in Maastricht due to coronavirus, we called our network partners in Hong Kong. They had already dealt with the consequences of the pandemic two months before us and had to reorganise their teaching. Their experience helped us a lot and saved us time. Such networks are also very relevant for the internationalisation of teaching here on campus, for example, for the creation of new double and joint degree programmes as well as international, multilingual degree programmes. This would make RUB even more attractive when competing for international talent. And that brings us back to the beginning of our conversation: Finding, promoting and connecting the people, the suitable talents – that is the basis for everything!

Thank you for talking to us!