The so-called CARS method (Coherent anti-Stokes Raman Scattering) can be used to study the vibrational states of molecules in plasmas. Researchers at RUB – pictured here is Dirk Luggenhölscher – have refined the method.
© Damian Gorczany
Diagnostics

The smaller a plasma, the larger the experimental setup needed to study it. It is worth the effort, because the reaction conditions found in cubic-millimetre-sized plasmas are very much unique.

Even though plasmas at atmospheric pressure are often only a few cubic millimetres in size, they pack quite a punch. This is because special non-equilibrium states can be set up in them, which facilitate physical and chemical processes that are not possible in any other environment. The plasma thus becomes a special kind of laboratory, where atoms and molecules can be excited without their surroundings heating up. “Such excitations could theoretically also be generated in a gas, but to do so we would have to heat it to several thousand degrees Kelvin. As a result, the molecules would decompose,” explains Professor Uwe Czarnetzki, Head of the Chair of Plasma and Atomic Physics at the Faculty of Physics and Astronomy. For many years, he and his team have been developing methods to explore the processes inside plasmas and to characterise the plasmas.

Plasmas boast a unique feature: electric fields can be used to supply energy to the electrons in the plasma; the electrons in turn interact with molecules such as nitrogen or carbon dioxide while transferring the energy to them. The molecules are excited, and this happens without the environment heating up in the process, as would be the case in a gas. The molecules that are excited to vibrate have a much higher reactivity than those in the ground state. Plasma can therefore change chemistry or even enable certain chemical processes in the first place. Consequently, plasma provides basic researchers with a unique opportunity to study the excitation of molecules and the associated chemistry beyond thermodynamic equilibrium. Uwe Czarnetzki is therefore primarily interested in the vibrational states of molecules in plasmas.

The individual atoms of molecules – for example, the carbon and oxygen atoms in the carbon dioxide molecule – are not rigidly bonded to each other. The bonds between the atoms periodically deform in different ways. These oscillations can take place on several energy levels, i.e. with different frequencies that can be excited by light energy. This requires the frequency of the light to correspond to the difference in frequencies between two neighbouring energy levels. It is possible to deduce the number of absorbing molecules in the light beam from the decrease in the intensity of the light at this particular frequency. The Bochum-based physicists led by Uwe Czarnetzki and Dr. Dirk Luggenhölscher in Collaborative Research Centre 1316 “Transient Atmospheric Pressure Plasmas” are using this fact to analyse the vibrational states of molecules in plasmas, specifically in collaboration with Humboldt Fellow Dr. Yanjun Du. She wants to find out how many different states occur and how often. 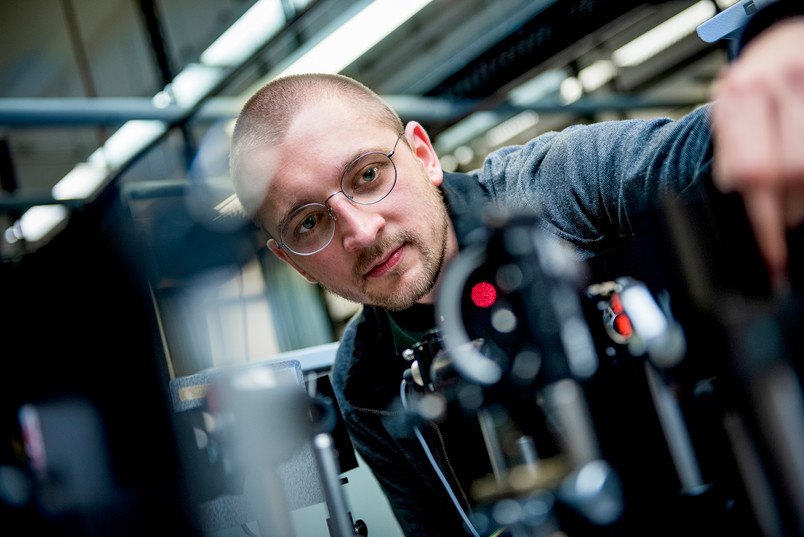 “Unfortunately, this method doesn’t work for all molecules or vibrations,” says Czarnetzki. That’s why he and his team, foremost among them Jan Kuhfeld, have refined the CARS method, short for Coherent anti-Stokes Raman Scattering. The complex laser method detects the otherwise forbidden transitions with high sensitivity, temporal and spatial resolution. In particular, the researchers revised the evaluation procedure for the theoretical calculation of the spectra so that they can also determine energy distributions that do not correspond to a thermodynamic equilibrium. “This is precisely the crucial point when using plasmas,” says Czarnetzki. The team also modified the laser system to detect all oscillation states simultaneously.

Understanding the mechanism behind excitation

Plasmas tend to do things that we don’t understand at first, but which are useful.

At first, it was not clear why efficient oscillation excitation works despite this supposed contradiction. “Plasmas tend to do things that we don’t understand at first, but which are useful,” points out Czarnetzki. “Then, once we understand the mechanism, it turns out to be very mundane in retrospect.” Thanks to a new laser technique developed in Bochum by Dr. Nikita Lepikhin and his colleagues to measure the electric fields, the researchers finally understood what exactly happens when the plasma is created and the oscillations are excited.

First of all, one has to bear in mind how a plasma is created: To begin with, there is a gas to which energy is added in the form of electric current, until finally a high-energy state emerges in which a certain proportion of the gas is ionised. However, not all charges are generated at once. Initially, only some particles of the gas are ionised and accelerated, which in turn produces new charges. “In a few nanoseconds, an avalanche of charges forms and a high-density plasma is created,” outlines Uwe Czarnetzki. It is not possible to maintain such a high-energy state permanently, so the plasmas are operated in pulsed mode, i.e. switched on and off again and again, so to speak, typically a few thousand times per second.

Due to the extremely fast pulsing of the discharge, the plasma solves the supposed problem of the different optimal electric field for plasma generation and oscillation excitation all by itself, so to speak. In the first nanoseconds after applying the voltage, there is a low plasma density, resulting in a high electrical resistance and thus a high field. Following strong ionisation, an exceptionally high plasma density is eventually achieved. This reduces the resistance and thus also the field. In the subsequent phase, the field is small and ideal for the excitation of oscillations. In addition, the charges discharged by the current flow are suitably replenished in a very thin transition region between the plasma and the electrode. By far the largest part of the high-density plasma, however, doesn’t generate any new charges, but only acts as a current conductor. Here, the electrons are gently accelerated in a weak field and give up almost all of the energy thus absorbed to the vibrational excitation of the molecules.

This already works well enough, at least in nitrogen molecules. In future, the physicists also intend to use this method to study CO2 molecules. Initial measurements and theoretical considerations give them cause for optimism.

In the meantime, Czarnetzki’s team has also succeeded in combining the method for measuring the vibrational states with the method for measuring the electric fields in plasmas – a challenging task. “The smaller a plasma, the bigger the experimental setup required to study it,” points out Uwe Czarnetzki. “Our plasmas are so small that we don’t have room to insert a thick filament into them.”

It can be enough if a cable is laid incorrectly to get interference in the system.

Laser technology solves this problem, but it requires complex experimental setups. Therefore, the experimental setups for measuring the electric fields and the vibrational states couldn’t simply be coupled. Instead, the physicists created two identical plasmas with great effort and attention to detail, on which they can run the measurements simultaneously and then pool the data. Each little detail made a difference. “It can be enough if a cable is laid incorrectly to get interference in the system,” says Uwe Czarnetzki. The fact that it was possible to obtain a coherent picture of the processes in the plasma for the first time by combining the two sensitive measurement methods is therefore one of the highlights of his research.

Interview: At home in two countries

Plasma research at the chair headed by Professor Uwe Czarnetzki takes place not only in Bochum, but also in Japan. After a postdoctoral residency in 1992, he fell in love with the country and its people. As a result, Czarnetzki had established collaborations with five different Japanese universities by 2015, later adding larger joint research projects. He looks back fondly on the 30 years of cooperation with the Far East. 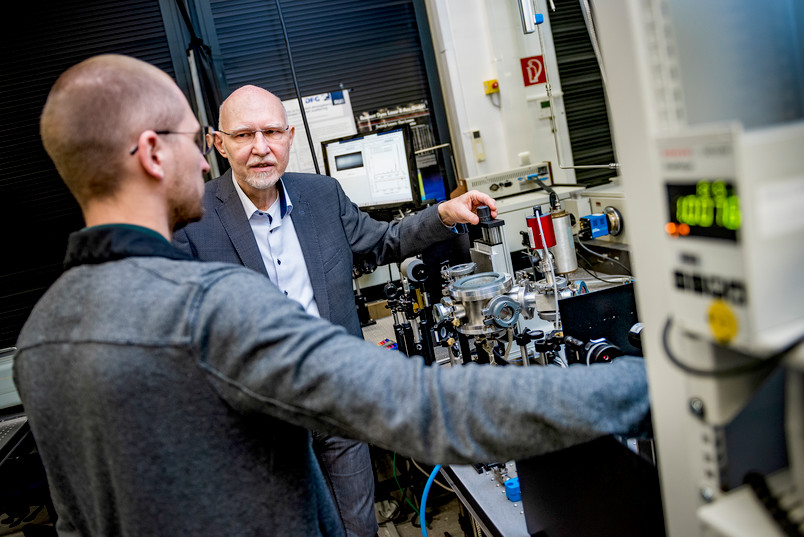 Uwe Czarnetzki in conversation with PhD student Jan Kuhfeld, who is working on the CARS system for his doctorate.
© Damian Gorczany

Professor Czarnetzki, why do you cooperate so closely with Japan? What makes the country so special?
Japan is one of the leading nations in the field of plasma research. I came into contact with a Japanese researcher, Professor Katsunori Muraoka, at the end of my PhD programme through my then supervisor, Professor Hans Frieder Döbele. Later, I also completed a postdoctoral year at Kyushu University with the support of the Humboldt Foundation. That was one of the best years of my life, I simply felt at home in the country. And this bond with Japan had far-reaching consequences.

Such as?
Japan is a very inspiring country, both culturally and scientifically. I have returned there practically every year since my postdoc period – and I also met my wife there. It has become my second home. Of course, not everything is perfect, but I do like the culture, the country – and especially the food!

But there is much more to the connection than just in the personal sphere.
That’s right, there is a strong academic connection. We facilitate exchanges between RUB and various Japanese universities for students, doctoral candidates and postdocs, and organise joint symposia and workshops. Needless to say, there have also been numerous research collaborations; I was also a visiting professor at the universities in Osaka and Nagoya, and I co-founded the world’s first alumni association of the Japan Society for the Promotion of Science. If I were to list all my collaborations with Japan in bullet points, I could easily fill several A4 pages. In the course of time, I have established many valuable contacts and friendships, of course. A colleague and friend from Osaka, Professor Satoshi Hamaguchi, is currently a Mercator Fellow in our Collaborative Research Centre.

What does the coronavirus pandemic mean for your network?
It makes exchange much more difficult. We have many video conferences, of course, and we’ve been able to make one of our seminars more international through virtual exchange: all continents with the sole exception of Antarctica are represented, and colleagues from Japan are also very much involved. But without travel and personal contacts, we will always be seriously handicapped. In general, the coronavirus crisis has slowed down our research. Not only were some guest scientists unable to travel or had to endure quarantines lasting several weeks. Specialist technicians from abroad, whom we need to repair special laser equipment, were also unable to come to Germany. I very much hope that the exchange will become easier again in the future.