“That was a fairly crazy idea”

Plasmas usually have destructive effects on enzymes. Here, they supply an enzyme with a building block for biocatalysis at the push of a button.

The synthesis of many chemicals results not only in the desired product but also in its mirror image: the physico-chemical properties of the so-called enantiomers are very similar and they are therefore difficult to separate. This, however is necessary, because they often have different biological properties. This is important, for instance, when it comes to drugs. The (S)-ibuprofen isomer is effective against pain, but its twin (R)-ibuprofen is not. “Occasionally, one of the two forms is even toxic,” Professor Julia Bandow, Chair of Applied Microbiology at the RUB Faculty of Biology and Biotechnology points out.

Her research group employs enzymes, i.e. biological catalysts derived for example from bacteria or fungi to produce such chemicals. Some enzymes produce only one of the two enantiomers.

However, enzymes are in general rather sensitive catalysts. Some are susceptible even to inactivation by the substrate they convert. “This is the case for our example enzyme. The unspecific peroxigenase, or UPO for short, extracted from the edible fungus Agrocybe aegerita or chestnut mushroom and synthesised by the research group of Professor Frank Hollmann from Technical University Delft can produce the fragrance (R)-1-phenylethanol. It requires hydrogen peroxide as a substrate for this purpose. If hydrogen peroxide is simply added to the enzyme-containing solution in the form of a concentrate, the enzyme is quickly inactivated,” explains Julia Bandow. 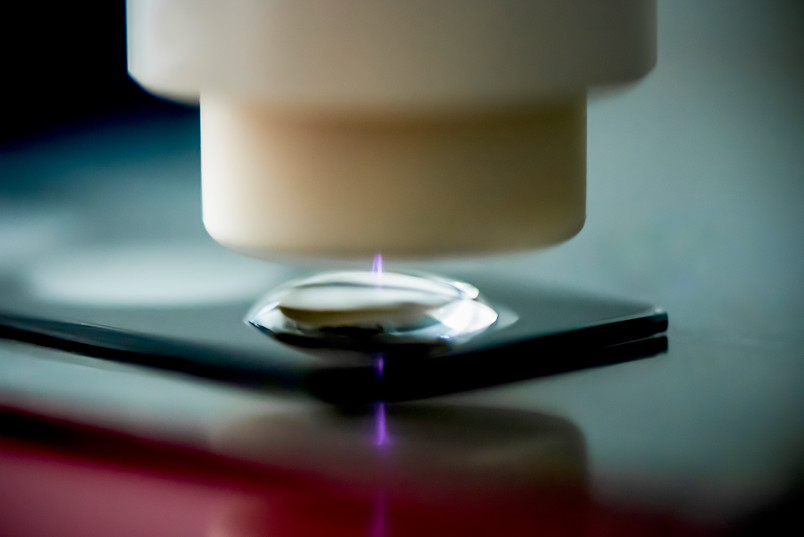 This dilemma the team resolved using several tricks. One of them was to use a plasma to produce hydrogen peroxide on demand. “That was a somewhat crazy idea,” Bandow admits in retrospect. “Because in fact, plasmas are the preferred means of destroying things.” In plasmas, which are created by adding energy to a gas, numerous reactive substances are formed, for example atomic oxygen, hydroxyl radicals, free electrons, and various excited species. Consequently, plasmas can be used to inactivate cancer cells, biofilms, viruses, or prions. In this instance, however, the plasma was supposed to help protect the biocatalysts by providing the enzyme with exactly the right dose of hydrogen peroxide needed to catalyse the fragrance at the push of a button.

The group therefore experimented with plasmas based on air or noble gases ignited directly above the enzyme-containing solution to produce the fragrance (R)-1-phenylethanol. However, the enzymes at the surface still were quickly destroyed by the reactive species. Here, trick number two came into play: the researchers attached the enzymes to beads, small spheres with a porous surface that lie at the bottom of the solution and hold the enzymes in place. They tested the optimal composition of the beads beforehand, because not every enzyme can dock equally well on every surface and still do its job, as this sometimes requires enzymes to move.

As a result, the beads sitting at the bottom of the container are covered by the solution, which acts as a buffer zone separating the enzyme from the plasma phase. The hydrogen peroxide produced by the plasma diffuses to the enzymes, where it is used in the reaction. Thanks to the buffer zone, the enzymes don’t come into contact with toxic doses of the substrate or other reactive species. Thus they remain intact and functional.

The reactors used so far are tiny. They can only hold up to five millilitres of liquid. “The protective layer that covers the beads is only about one millimetre thick,” says Julia Bandow. “This gap is sufficient to protect the enzymes from unstable and short-lived reactive substances that are created in the plasma. Some conveniently react to form hydrogen peroxide that is used as a substrate.” Hydrogen peroxide itself is comparatively long-lived. Its dose can be adjusted, for example, by pulsing the plasma, i.e. switching it on and off.

In the experiment, the enzymes were active for eight cycles of ten minutes without damage. Between cycles, the product (R)-1-phenylethanol was harvested and the second substrate, namely ethyl benzene, was replenished. The extraction of the product (R)-1-phenylethanol from the solution was carried out with ethyl acetate in just one step. “This is the great advantage of the biocatalytic over catalytic processes which produce both enantiomers,” stresses Julia Bandow.

Up to this point, the whole experiment was a proof-of-concept project, and it proved one thing: the approach works. Now, the research group is optimising the process, mainly with the aim of scaling up production volumes and optimising reactors. One reactor in which the enzyme-loaded beads rotate in the solution so that the enzymes have a steady substrate supply has already been tested successfully.

Further experiments have shown that the process works even better if the noble gas helium is used instead of air as the basis for plasma generation and if water vapour is added. “You find a lot more hydrogen peroxide in the solution, perhaps generated from plasma-generated OH radicals,” as Julia Bandow speculates. This increased the yield from about ten nanomole hydrogen peroxide per minute to 200 nanomole per minute. A further increase in hydrogen peroxide formation by 50 per cent was achieved by changing the voltage.

Our greatest success is that we have come so far in a relatively short time.

“Our greatest success is that we have come so far in a relatively short time,” Julia Bandow points out. “The plasma reactor might open up a new class of enzymes for commercial use.”

In the search for other enzymes that can produce valuable chemicals, the researchers are pursuing several strategies. Streptomyces, a group of soil-dwelling bacteria, also have hydrogen peroxide converting enzymes. However, the characterisation of the first three candidates hasn’t yet turned up any promising manufacturers of attractive products. 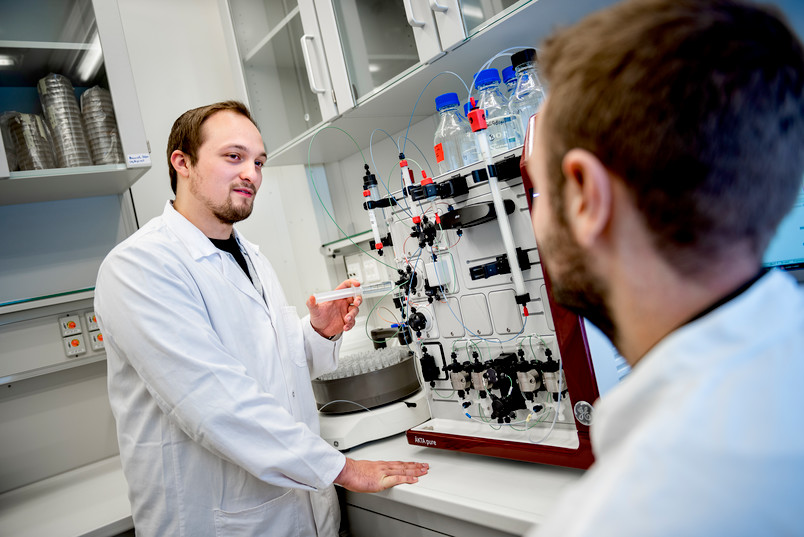 Another route to new enzymes could be through compost. Tests with model substrates, whose turnover is for example indicated by a colour change, revealed promising results. “We already know at what pH and temperature such reactions take place,” says Bandow. “But we haven’t yet identified which enzymes are responsible. That is the great unknown.”