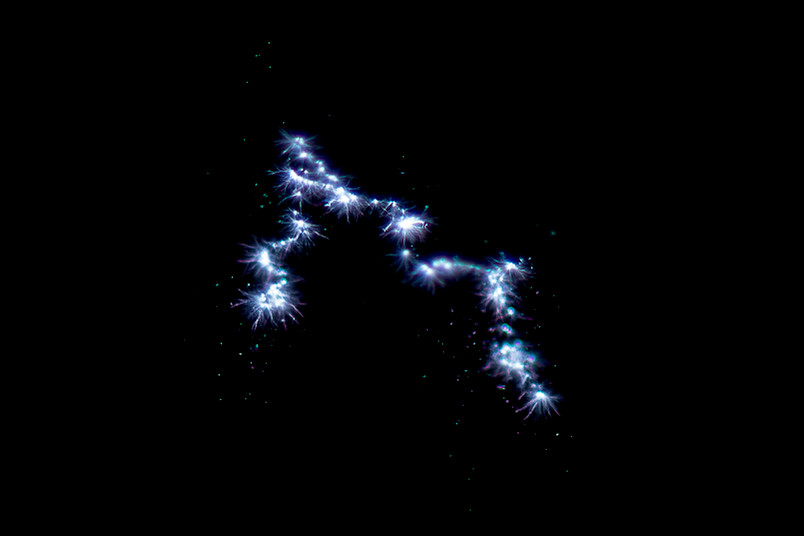 The ignition of plasma under water
© Damian Gorczany
Underwater plasmas

Plasmas in liquids have long been used in water purification and wound treatment. Now, they are to improve the efficiency and service life of an electrolysis cell used for C02 conversion.

The plasma ignites with a bright flash and tears through the water for a few billionths of a second. Dr. Katharina Grosse from Collaborative Research Centre 1316 “Transient atmospheric plasmas – from plasmas to liquids to solids” (RUB) takes spectacular pictures that show the ignition process of plasma under water at high temporal resolution. Delivering the first data sets with very high temporal resolution, the researcher supports a hypothesis on the ignition of these plasmas: there is not enough time in the nanosecond range to form a gas environment. The nanosecond plasma ignites directly in the liquid. The particles created during ignition can interact efficiently with catalytic surfaces.

But how does the plasma ignite in these short time scales? What happens afterwards? Which substances are produced? And how is this ignition in the liquid possible in the first place? In her doctoral thesis, physicist Grosse explores these very questions. To this end, she applies a high voltage to a hair-thin electrode immersed in water for ten nanoseconds. The strong electric field thus generated leads to the ignition of the plasma. Using high-speed optical spectroscopy in combination with modelling of the fluid dynamics, the Bochum-based researcher is able to predict power, pressure and temperature in these underwater plasmas and, consequently, to explain the ignition process and plasma development in the nanosecond range.

Plasmas are called the fourth state of matter: in the solid phase, their molecules occupy solid places, whereas there is some freedom of movement in the liquid phase and a lot of more freedom of movement in the gas phase. If more energy is supplied to a gas, the molecules break up and a plasma is created. The negatively charged electrons separate from the positively charged atomic nuclei and turn them into ions. These free electrons and ions can be accelerated by electromagnetic fields. If the fast electrons collide with other molecules, they can change them in turn by ionising or breaking them down. This process can result in different, sometimes short-lived reactive neutral particles and ions that may be useful for a variety of applications.

Hotter than the sun

This is what she has observed: at the time of ignition, extreme conditions exist in the water. For a short time, pressures of many thousands bar are created; this corresponds to or even exceeds the pressure at the deepest point in the Pacific Ocean, as well as temperatures of many thousands degrees, similar to the surface temperature of the sun. “In addition, a power of several 100 kilowatts is consumed in the plasmas for a short time, which more or less equals the connected load of several single-family houses,” explains Professor Achim von Keudell, Grosse’s doctoral supervisor and head of the Institute for Experimental Physics II. 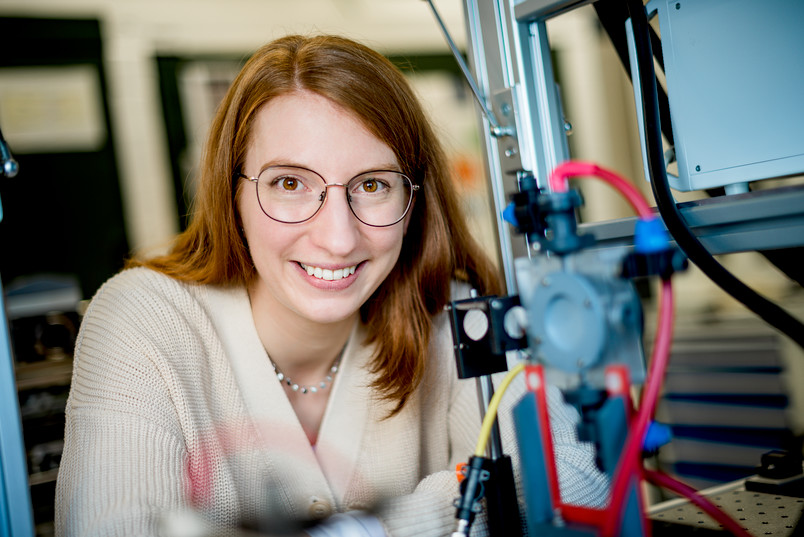 To achieve these measurement results, a complicated setup is necessary, which Katharina Grosse spent roughly a year on developing: “The electromagnetic interference is very strong and affects all measurement electronics. We had to build a large metal cage around the plasma chamber to bypass this source of interference. Another difficulty was to ensure the simultaneity of spectroscopic measurement and camera recording.”

The tinkering has paid off: it is now possible to observe the plasma development very precisely. The recordings call into question the theory that has been common so far. Until now, this theory assumed that a high negative pressure difference forms at the tip of the electrode, which leads to the formation of very small cracks in the liquid with expansions in the nanometre range, in which the plasma can then spread. “It was assumed that an electron avalanche forms in the cracks under water, enabling the ignition of the plasma,” says von Keudell. However, the images taken by the research team from Bochum suggest that the plasma is “ignited locally within the liquid,” explains Grosse.

In her attempt to explain this phenomenon, the physicist uses the quantum-mechanics tunnel effect. This describes the fact that particles are able to cross an energy barrier that they should not be able to cross according to the laws of conventional physics, because they do not have enough energy to do so. “If you look at the recordings of the plasma ignition, everything indicates that individual electrons tunnel through the energy barrier of the water molecules to the electrode, where they ignite the plasma locally, i.e. precisely where the electric field is highest,” says Grosse. This theory has a lot going for it and is the subject of much discussion among experts. Subsequent experiments with negative pulses are to support Grosse’s tunnel theory.

Water is broken down into its components

The ignition process under water is as fascinating as the results of the chemical reaction are promising for practical applications. The emission spectra show that, at nanosecond pulses, the water molecules no longer have the opportunity to compensate for the pressure of the plasma. The plasma ignition breaks them down into their components, namely atomic hydrogen and oxygen. The latter reacts readily with surfaces. And this is precisely where the great potential lies, explains physicist Grosse: “The released oxygen can potentially re-oxidise catalytic surfaces in electrochemical cells so that they are regenerated and once again fully develop their catalytic activity.”

How exactly is this going to be achieved? Can plasma and electrolysis be combined? RUB PhD student and chemist Philipp Grosse is looking for answers to these questions at the Fritz Haber Institute of the Max Planck Society in Berlin. “Electrochemical cells,” he explains, “help, for example, to reduce, recycle and convert carbon dioxide into useful chemicals. This requires a catalyst. However, during the electrochemical process, the catalytic surfaces wear out and lose their catalytic capabilities.” This is where the underwater plasmas studied by Katharina Grosse could provide a remedy and be used for material conversion at the electrode-liquid interface.

The brother and sister team intends to find out in what way underwater plasmas can be used in the electrolysis of chemical substances. How can the plasmas support electrolysis by changing the liquid and the electrode surface? How does plasma interact with the electrochemical cell? For this purpose, Katharina Grosse is setting up her experimental setup in Berlin, where her brother Philipp has been conducting research for two years. Instead of water, they use electrolytes as liquids, and a catalytic surface is built directly into the plasma chamber. The Grosses decided to use copper oxide in the form of nanocubes as a catalyst. These are nanometre-sized copper oxide cubes that are used as a catalyst for CO2 reduction. They then apply a high voltage to the electrode for a few microseconds. A plasma ignites. The changes observed in the copper cubes suggest that the oxygen produced by the plasma ignition activates the copper oxide. The initial measurements imply that the extreme plasma is indeed able to re-oxidise the copper cubes and thus regenerate the catalytic surface. Once the catalyst is ready for use again, the electrochemical cell should also work, and with it the CO2 reutilisation process. This would allow CO2 to be continuously converted into other products in industrial plants; the cycle would thus be closed.

The dream of an infinite electrochemical cell

In Bochum and Berlin, the researchers are already dreaming of an infinite electrochemical cell in which electrochemical processes alternate with plasma ignitions. But the Grosses still have a long and complicated way ahead of them. The greatest challenge at present is to combine the physical with the chemical structure so that plasma ignition and electrolysis can take place simultaneously.

The future of plasma technology

Should this succeed, it would be a “milestone, a technology with a lot of potential,” stresses von Keudell. The chemical industry is very interested in such a plasma process, according to the spokesman for the Collaborative Research Centre: “They have high hopes for the electrification of the chemical industry.” The advantages of plasma technology: it takes up little space, and the electrical energy can support the conversion of chemical substances at the push of a button.