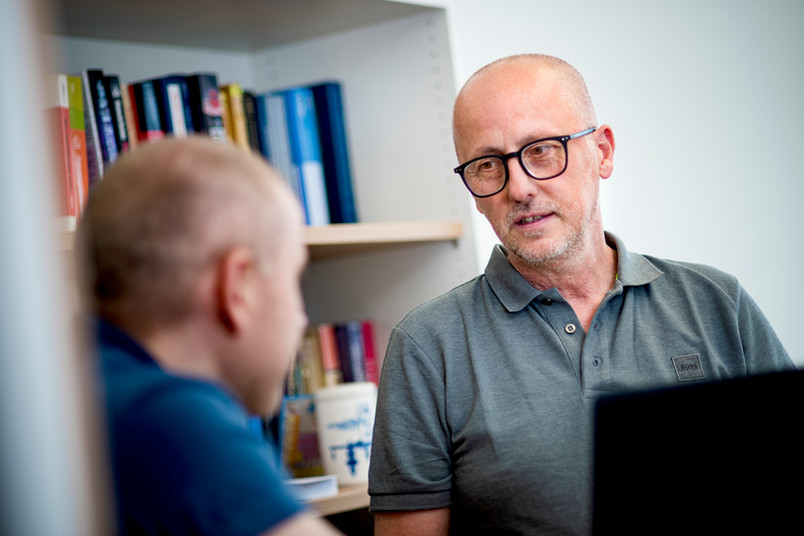 What exactly happens at the interface between plasma and surface

Plasmas have been used in industry for decades with great success. However, in many cases their application is based on trial and error. A deeper understanding of the processes that take place in the excited gases, sometimes in a very short time and on tiny length scales, has been largely lacking until now. Researchers from Bochum and Ulm are venturing into this new territory together in the frame of the Collaborative Research Centre 1316 “Transient Atmospheric Pressure Plasmas: From Plasmas to Liquids to Solids”.

Their fields of work are complementary: Professor Thomas Mussenbrock, who holds the Chair of Applied Electrodynamics and Plasma Technology at RUB, focuses on the plasma as a whole, whereas Professor Timo Jacob, head of the Institute of Electrochemistry at Ulm University, specialises in atomic processes. “We calculate processes at different ends of the time and length scales and try to fill the gap in between,” as Mussenbrock recaps.

Timo Jacob is the expert for interfaces between plasmas and their environment. This interface can be between plasma and solid, but also between plasma and liquid. “If we want to use plasmas to coat a surface or to change its structure, we have to understand the interaction between the plasma species and the surface on an atomic scale,” he explains. This process seems simple and predictable. But his team goes into much more detail, because complicated molecules can also form in plasmas, which are present in specific excited states. They can then change both the properties and the structure of catalytic surfaces or even actively impact reactions at the interface directly. Until now, such details had been little understood. “We had to develop the tools for this first,” says Jacob. 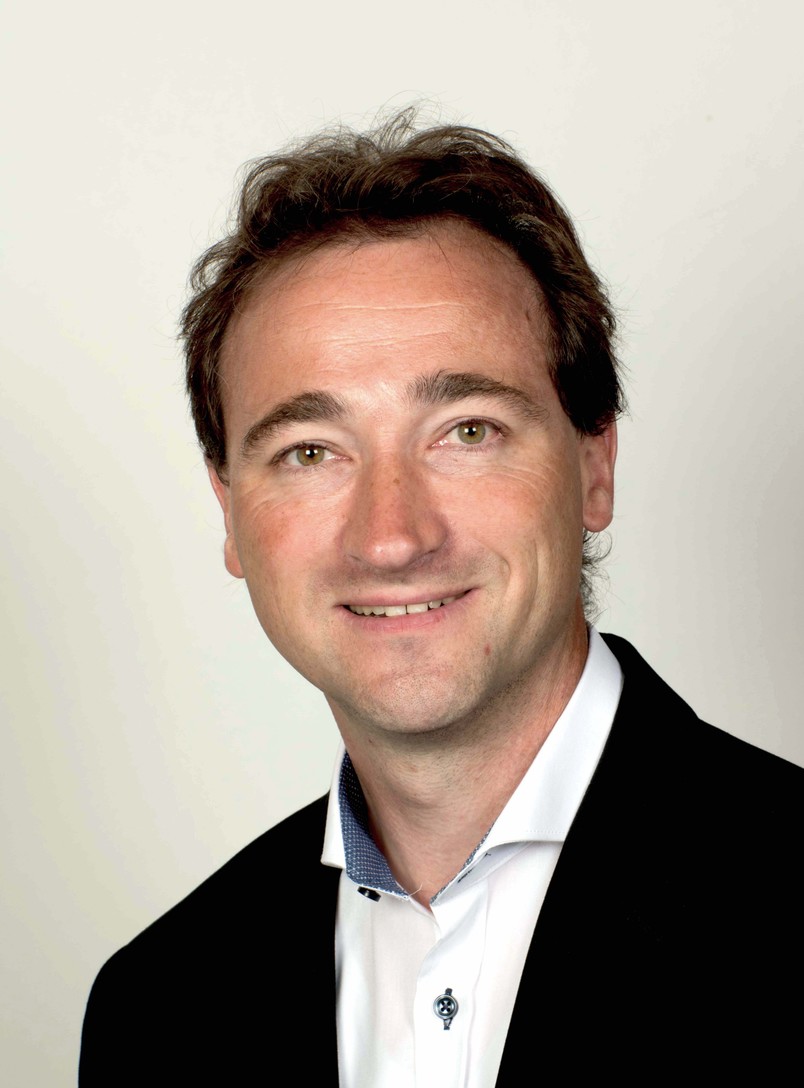 Timo Jacob from the University of Ulm is a partner in the Collaborative Research Centre and works closely with the Bochum research team.
© Elvira Eberhardt / Uni Ulm

He and his team established methods that can describe how the plasma changes the molecules during a reaction. The influence of the molecules, for example, can result in an effect on the interface that becomes meta-stable but of particular interest for catalytic reactions.

The processes calculated in this manner take place on the Ångström or nanometre scale within a tiny fraction of a second. The fewer effects the researchers have to calculate simultaneously, the more accurate the simulation can become. “Our highly accurate calculations involve a maximum of 300 to 400 atoms; using semi-empirical dynamic simulations even several 100,000 atoms are possible,” explains the researcher. “We sometimes use specifically acquired computing clusters or mainframes at high-performance computing centres for this purpose.” The effort usually increases cubically: i.e. if twice as many atoms are to be included in the calculation, the computational effort increases eightfold. 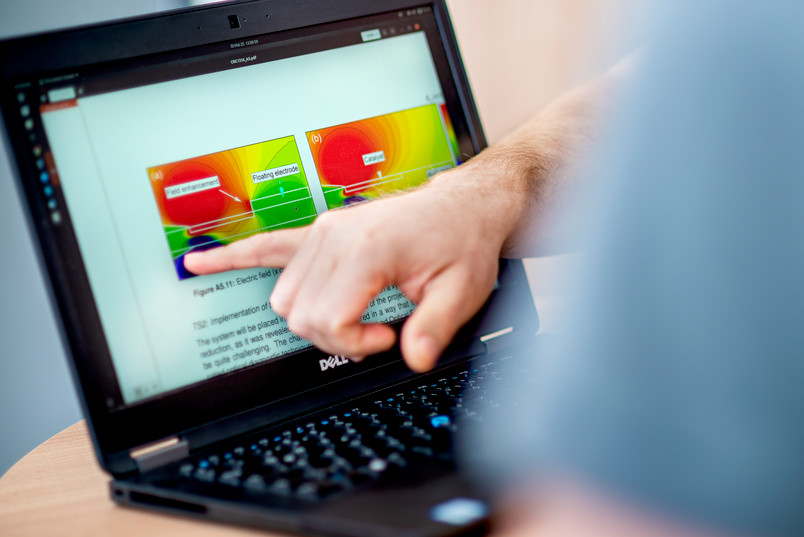 The graphical representation of simulation results shows the spatial distribution of electric field strength in the area above a high-voltage electrode of a dielectric surface barrier discharge.
© Damian Gorczany

The fundamental insights thus gained should help, for example, to make plasmas usable for new applications – most importantly, catalytic processes. The researchers concentrate on both the reduction of carbon dioxide (CO2) and the decomposition of relatively simple hydrocarbons as a model, using n-butane as an indicator.

It is of course not enough to consider only a few hundred atoms. This is where the research of Thomas Mussenbrock’s team completes the overall picture. His length scale is a billion times larger than Jacob’s. Quantum mechanical effects that are important at the atomic level no longer need to be explicitly considered in this case. The idea is to map plasma dynamics and plasma chemistry. “We look at the plasma based on classical physics.” The methods for this are known and well understood, but the needed data is extremely scarce. 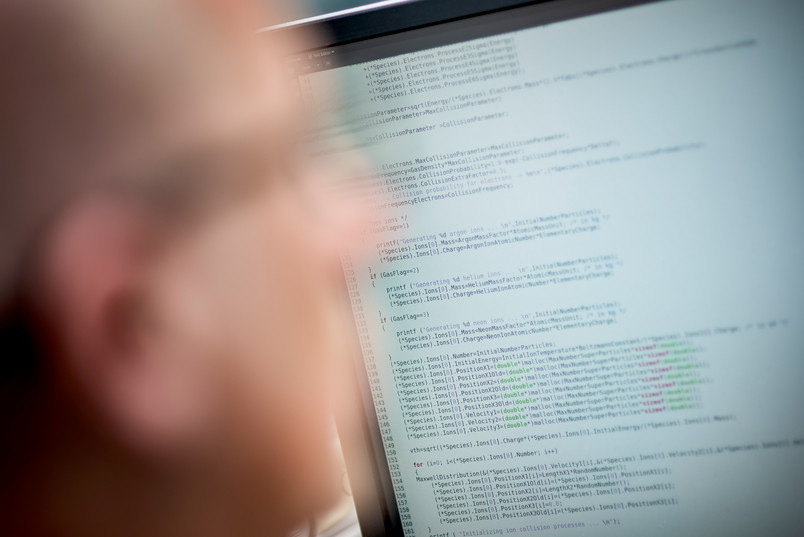 A major challenge is that industrial processes with plasmas should take place at atmospheric pressure, if possible, and preferably at air pressure. “At this relatively high pressure, many interactions come into play,” explains Mussenbrock. What reacts how strongly with which molecules and atoms? Based on the results of Timo Jacob’s calculations, his team scales up the simulation. The results can be matched with experiments – deviations must be understood and explained.

“Bringing the two ends of the time and length scales together is uncharted scientific territory,” points out Thomas Mussenbrock. Consequently, the teams are breaking new ground. Perhaps at some point, thanks to their findings, it will be possible to make large-scale industrial processes such as ammonia production more energy-efficient.