The tropical coral reefs stretch over many miles along the equator and provide a habitat for countless animals and plants.
© Fabian Gösser
Biodiversity

Global warming and ocean acidification are endangering the coral reef habitat that is home to many species. However, stony corals are able to react to climate change and put up defences against it.

Yellow, green, blue, purple, pink – the miniature coral reef in the aquarium lab run by Professor Ralph Tollrian’s Department of Animal Ecology, Evolution and Biodiversity is reminiscent of a colourful tropical rainforest underwater. Here, PhD student Fabian Gösser, together with Dr. Maximilian Schweinsberg, is researching the reactions of stony corals to environmental changes, such as the rise in sea temperature. Gösser is primarily interested in the phenomenon of polyp bailout, i.e. the expulsion of small, bud-like individual corals, the so-called polyps. Under stress, the colony of polyps that form a stony coral dissolves. The individual polyps detach, settle elsewhere and can form new coral colonies. The phenomenon of polyp bailout has been little studied so far – and neither has the potential of this reaction for the survival of the reefs. 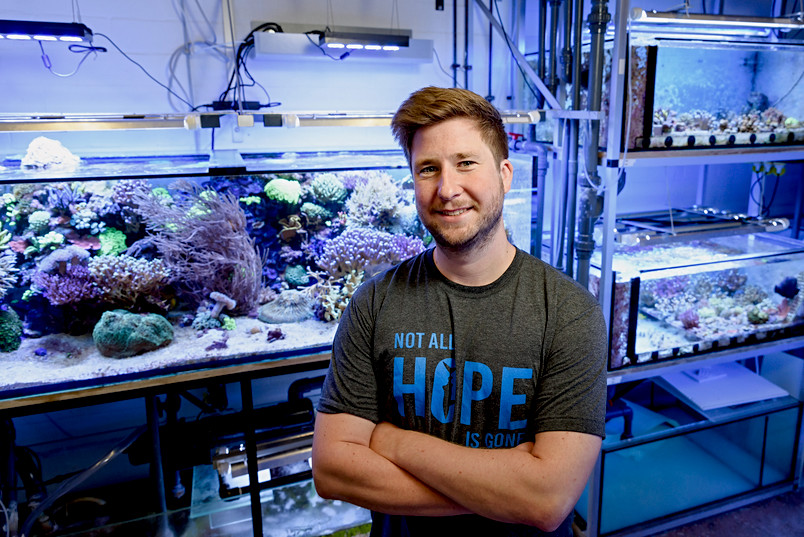 Stony corals are members of the cnidarians and can form calcareous skeletons. “This is how they are able to set up massive structures and enormous reefs,” explains RUB biologist Fabian Gösser. Probably the best-known reef is the Great Barrier Reef, which stretches some 2,300 kilometres along the Australian coast. Such reefs provide a unique marine habitat for countless species. “This place is bursting with life. The corals form a highly interconnected community with many other living creatures, with many direct interdependencies and short nutrient cycles,” as the PhD student explains what makes coral reefs so fascinating. The symbiosis between algae and corals is particularly impressive. For example, small, unicellular algae from the dinoflagellate group live in the stony corals and help them secrete their calcium carbonate skeleton. “The corals offer these algae not only a protected habitat, but also CO2 and nutrients. In return, the algae supply the corals with photosynthesis products such as sugar and lipids,” as Gösser outlines the symbiotic interaction.

The fact that the marine habitat is likewise affected by climate change has long been established. In the summer months, marine biologists are already observing how the rising water temperature leads to global coral bleaching. If temperatures remain high, corals die. “The rise in temperature disrupts the symbiosis between corals and algae. When the algae responsible for the colouration of the corals die, the corals take on a white, pale appearance. The corals can’t survive this in the long run. If they die, other reef organisms die with them,” as Gösser elaborates the consequences of climate change. 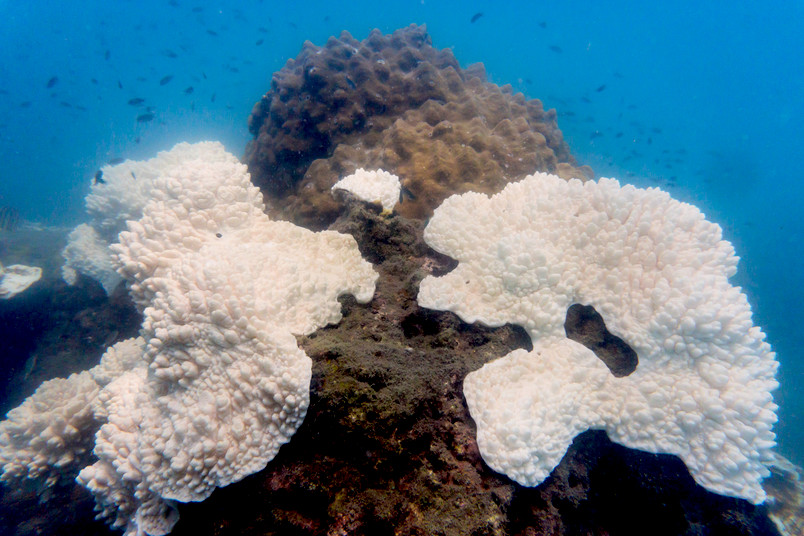 But it is not only the heat that worries scientists. For example, the increase in CO2 levels in the ocean renders calcification more difficult. “The absorption of atmospheric CO2 has led to acidification of the oceans. The pH value of the oceans has decreased measurably in recent years,” explains the RUB researcher. This process also affects the corals. “It’s more difficult for them to secrete calcium carbonate, which dissolves much more easily at lower pH values. Researchers have observed how the skeletons of some coral species have become more porous and growth rates have decreased,” Gösser continues. The diversity of coral species on certain reefs has also decreased. “We very much expect to lose coral reefs in their current form if global warming continues at this rate,” says the biologist, citing the prevailing expert opinion. “If stony corals die out, many reef organisms, such as richly coloured fish, will also disappear. This is already evident on reefs suffering from this phenomenon.”

The Bochum-based research team wants to understand the corals’ reactions to climate change in detail. To this end, they are conducting experiments in their research tanks by varying temperature, CO2, partial pressure and salinity. The RUB researchers recreate in research tanks what happens when stony corals are exposed to altered environmental conditions.
© Roberto Schirdewahn

“We subject the corals to a stress, simulating even more dramatic environmental conditions,” as Gösser outlines the approach. The biologists have already determined that different coral species react with different degrees of intensity to the stressors, such as an increase in salinity. “There are species that are more robust and species that are more sensitive,” as Gösser summarises the findings. 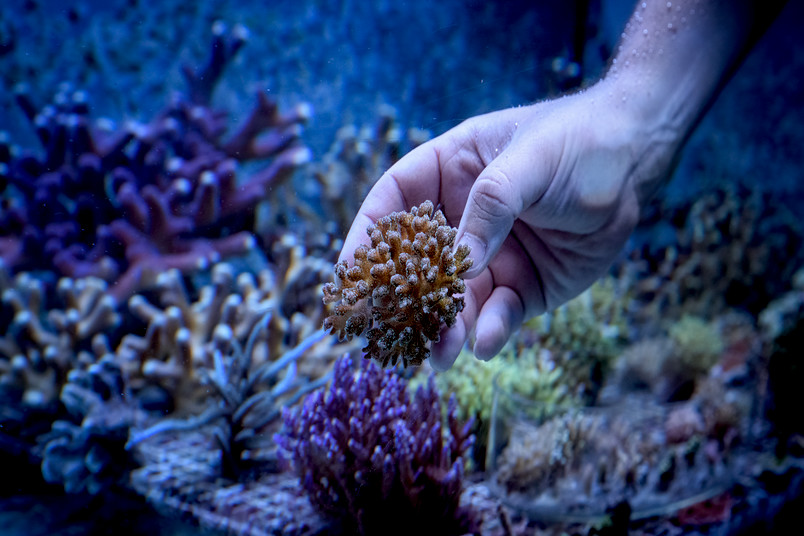 In the experiments conducted by the RUB researchers, some coral species, namely acroporids (in the foreground, purple) and pocilloporids (in hand), were more sensitive to environmental changes than others.
© Roberto Schirdewahn

When polyps leave the sinking ship

The RUB biologist considers the polyp bailout reaction, which he observed in stony corals, to be the most fascinating phenomenon. “The individual polyps detach from the coral colony in response to a temperature rise of four degrees Celsius above their tolerance and leave the sinking ship, so to speak,” explains Gösser. Even more astonishing in his opinion is that these polyps were able to start growing in a different location. The PhD student explains the significance of the reaction: “Even if only a small proportion survives the detachment process, it could have a huge impact on the preservation of the coral population, the genetic diversity, and the survival of the reefs.” 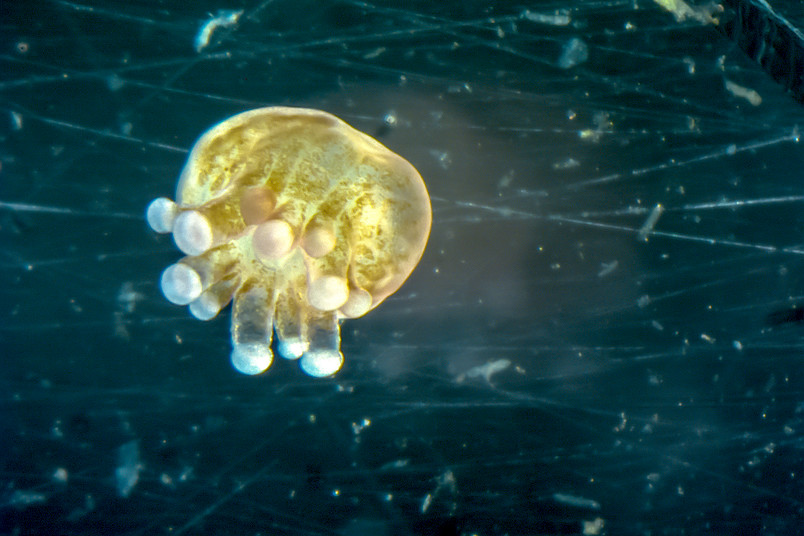 Polyp bailout describes a process in which individual polyps detach from the colony.
© Fabian Gösser The Bochum-based research team has succeeded in re-settling the polyps that survived the detachment process.
© Fabian Gösser

Several questions have been keeping researchers busy: Why can a rise in temperature lead to both coral bleaching and polyp bailout? What causes the different outcomes? To understand the reaction in more detail, Gösser studies the bailout process at the molecular level. He analyses what happens to the polyps when they detach and which genes are switched on during bailout. For this purpose, the biologist first extracts DNA and RNA from tissue samples of stony corals that were taken at different times during the bailout process. He then sequences the complete messenger RNA, which transmits the information of the active genes as messengers, and compares the base sequence with previously decoded genomes. “We do see that genes are switched on during the bailout process that are responsible for immune reactions in humans, for example,” as the biologist describes the initial results.“ Chimeras are coral colonies that consist of several individuals of one species and can thus draw on a larger genetic pool. The RUB researchers artificially induce such fusions in the lab.
© Fabian Gösser

At the same time, his supervisor Dr. Maximilian Schweinsberg is researching the molecular composition of so-called chimeras, i.e. coral colonies consisting of several individuals. “This often occurs in coral reefs,” points out Gösser. “From the outside, the coral looks like one organism, but if you examine it at the molecular level, you find that it might be several genotypes fused together.” In the stress tests at the department, chimeras were found to be much fitter than corals that consist of a single genotype. “If a coral colony can draw on more than one stock of genetic material, there’s hope that this augmented genetic repertoire might improve the colony’s chance of survival,” says the PhD student, pointing out the potential of chimeras. 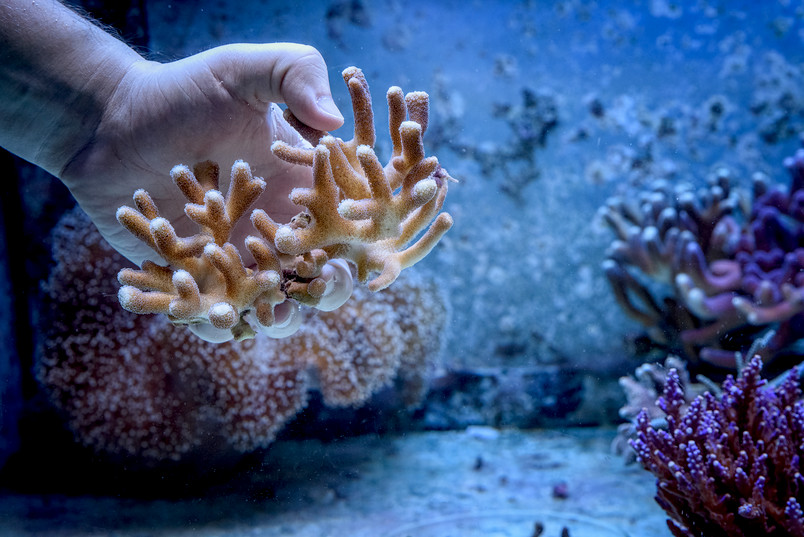 Researchers around the world debate whether humans should be allowed to intervene in order to preserve coral reefs artificially.
© Roberto Schirdewahn

A helping hand for evolution

Is it therefore possible to breed hybrid coral systems with unique survival capabilities that can withstand climate change? And should humans intervene at all in the marine habitat in order to preserve it? RUB researchers are not the only ones struggling with these questions. The idea of so-called assisted evolution is the subject of controversial debates worldwide. Researchers are already devising concepts for artificial coral preservation. For assisted evolution, a molecular understanding of corals is indispensable. The Bochum-based researchers are developing these very basics – in order to remain one step ahead of climate change.

Protecting the habitats above water

Coral reefs cover about 0.1 per cent of the world’s ocean surface. At the same time, around half a billion people rely on coral reefs for their livelihood. In developing countries in particular, many people depend on an income from fishing and diving tourism. It is estimated that reef-based tourism alone generates several billion dollars annually. Protecting the reefs is therefore not only worthwhile for the sake of aesthetics and ecology, but also for economic reasons. In addition, coral reefs serve as valuable coastal protection. The aquarium lab at the Department of Animal Ecology, Evolution and Biodiversity
© Roberto Schirdewahn
Of sea cucumbers and sea urchins

The department’s own aquarium houses colourful coral species as well as shy sea cucumbers, brightly coloured coral fish, curious cleaner shrimps and a cheeky sea urchin that likes to redecorate. The aquarium is maintained by the staff at the Department of Animal Ecology, Evolution and Biodiversity. They use special lighting to imitate the light spectrum of sunlight over the course of a day, keep the water temperature at 25 degrees, prepare seawater with special salt mixtures and monitor the calcium, carbonate, nitrate and phosphate content of the water at regular intervals.

Coral research is not the only field with a long tradition at the RUB Department of Animal Ecology, Evolution and Biodiversity. Department head Professor Ralph Tollrian has been organising regular diving excursions to coral reefs for his students for many years. PhD student Fabian Gösser, too, took advantage of this opportunity during his Bachelor’s studies: “I was so fascinated by coral reefs. Their shapes, colours, the energetic life! I knew immediately: I definitely want to do coral research.”

The research by Fabian Gösser contributes to goal 14 “Life below water.”