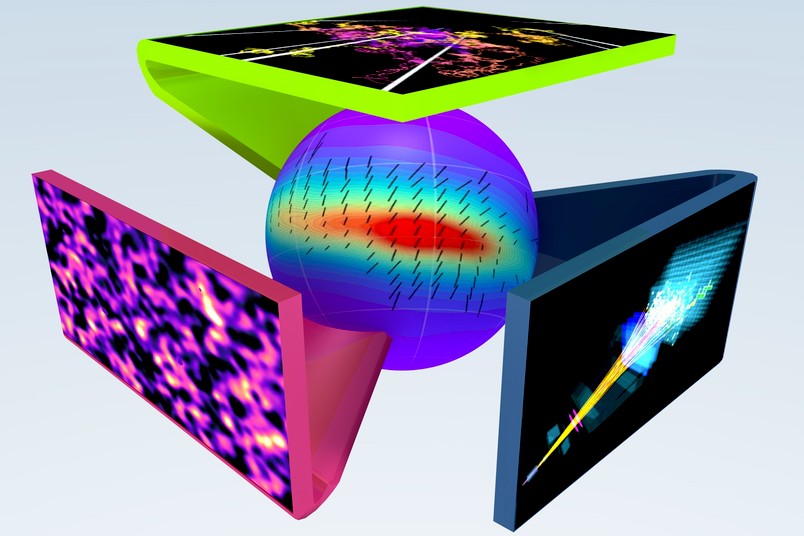 The new Collaborative Research Centre 1491 is developing fundamental physics results such as plasma and particle properties as well as dark matter properties (green, blue and red), which are then used in astrophysical contexts to understand the signatures measured on Earth.
© Julia Tjus
Research funding

The new centres are being established in astronomy and religious research. In addition, a plasma research centre has been extended.

The two new Collaborative Research Centres (SFBs) 1491 and 1475, which were approved by the German Research Foundation (DFG) at RUB, focus on the interplay of cosmic matter and on metaphors of religion. Moreover, SFB 1316 “Transient Atmospheric Pressure Plasmas” is entering its second funding phase. This brings the number of Collaborative Research Centres coordinated at RUB up to ten. “I sincerely congratulate our colleagues on this success,” says RUB Rector Professor Martin Paul. “The Collaborative Research Centres highlight the wide range of research conducted here at world-class international level and demonstrate the strengths of a university with a full range of disciplines. They are also evidence of the importance of networking between researchers, both on campus and with external partners.”

In the night sky, we observe the same constellations year after year with the naked eye, so that we might get the impression that the Universe is a static construct: a thought that prevailed for centuries, before it was possible to prove at the beginning of the 20th century that the Universe is a dynamic system that emerged with a Big Bang, and still continues to expand.

Even on smaller scales, the dynamics are high, stars form and perish in powerful supernova explosions. In doing so, they influence the dynamics of their host galaxies. The explosions create a plasma which is able to accelerate particles to the highest energies, which in turn interact with cosmic magnetic fields. This interplay of cosmic matter that drives these processes is the research focus at Collaborative Research Centre (CRC) 1491: “How are different forms of matter and energy transformed into each other? How are the smallest elementary particles accelerated to the highest energies ever observed? How do large-scale magnetic field structures form in the plasma of galaxies? How does dark matter affect the dynamics of the systems?” is how Professor Julia Tjus, spokesperson at the CRC, describes some of the research questions.

Sixteen leading researchers are working together in 13 subprojects to create a unifying picture of the detectable traces of interacting matter. They aim to understand how regular galaxies like our Milky Way work, as well as the ones with an active, supermassive black hole at their core. To this end, theoretical astrophysical models are combined with experimental observations of all wavelengths and particles. Furthermore, CRC 1491 provides knowledge about the fundamental properties of matter from theoretical calculations, cosmological observations and terrestrial experiments on particle interactions. This knowledge can be used directly in astrophysical models. The combination of the two research strands provides a detailed and precise picture of how galaxies function and evolve.

Religious meaning-making in language use

Religious meaning-making occurs in and through metaphors. Religion depends on them, as it can never articulate its ultimate object, namely the transcendental, literally. The SFB 1475 “Metaphors of Religion: Religious Meaning-Making in Language Use” aims to understand this process with greater theoretical precision and grasp it methodically, in order to empirically and comparatively research the semantic formation of religion. This is how the researchers hope to better understand the formation of religion as a socio-cultural phenomenon and to record central developments within specific religious traditions more precisely.

While extensive research already exists on individual metaphors in religious texts, the SFB’s innovative focus is on metaphoricity as a central principle underlying religious meaning-making. In addition, the multidisciplinary character of the SFB enables comparative studies on a unique scale. The subprojects deal with Christianity, Islam, Judaism, Zoroastrianism, Jainism, Buddhism and Daoism with sources from Europe, the Near and Middle East as well as South, Central and East Asia. The time period ranges from 3000 BC to the present day. The subprojects are grouped into three sections based on the fundamental linguistic domains, namely the physical, the psychological and the social domain.

The SFB is integrated via a methodological toolkit, most notably through a metaphor annotation tool used in all subprojects, which complements hermeneutic interpretation and computer-assisted analysis. “In the first funding phase, the SFB will be focusing on texts,” explains Professor Volkhard Krech, spokesperson of the SFB. “In addition, a research group will be exploring the relationship between metaphors and material objects and developing methodological approaches.”

Various research groups at Ruhr-Universität Bochum and the Karlsruhe Institute of Technology are involved in the Collaborative Research Centre.

Systems for species conversion are an important building block in the use and storage of locally generated regenerative energies. The Collaborative Research Centre (SFB) 1316 (SFB 1316) “Transient atmospheric pressure plasmas – from plasma to liquids to solids” is focusing on combining atmospheric pressure plasmas with catalysis to develop the most flexible solutions possible for this species conversion. “They should be scalable, controllable and robust against external influences, such as impurities in the source materials,” explains Professor Achim von Keudell, spokesperson of the SFB.

The first funding period of SFB 1316 focused on exploring transient phenomena in atmospheric pressure plasmas as well as interfacial processes at the surface of catalysts. The emphasis was on three systems: the plasma-catalytic conversion of gases, the combination of plasmas with electrolysis at the interface between liquid and solid, and plasma-assisted biocatalysis, in which enzymes produce new molecules in a highly selective process. The researchers have made great progress in this field: they can now precisely control how reactive particles form in plasmas. They have also gained a deeper understanding of the atomic and molecular surface processes.

In the second funding period, the aim is to combine these findings in order to optimally exploit the interplay of a plasma with its reactive particles and a catalytically effective surface. There are many more questions left to explore, since in traditional catalysis, for example, stable molecules are essentially reaction partners, whereas in plasma catalysis, reactive particles or highly excited species can accelerate or suppress a certain reaction path. The first prototype systems for plasma catalysis, plasma electrolysis and plasma biocatalysis are to be developed on this basis.

In addition to RUB as the host university, researchers from the University of Ulm, Forschungszentrum Jülich and the Fritz Haber Institute in Berlin are involved in the SFB.