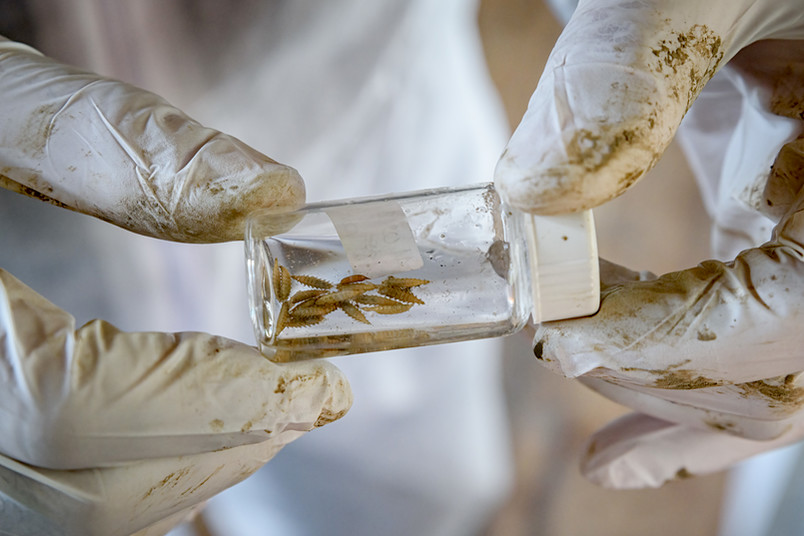 These maggots belong to the latrine fly.
© Roberto Schirdewahn
Biology

When maggots solve a murder

Searching for clues and leads is still something investigators have to do themselves. But if they find creepy-crawlies at the crime scene, these creatures can be of great help.

First come the blowflies. A few hours after death, they head for the eyes, nose, mouth and wounds of a lifeless body. This is where they lay their eggs – and only a few days later, the body is teeming with life: countless maggots hatch and feed on the dead tissue until they finally become new flies. Not only blowflies, but also other fly species join them in the course of time, and finally various beetles come crawling in. The hustle and bustle that takes place on corpses can be quite revealing – for example, if we want to find out when and under what circumstances a person died.

Dr. Ersin Karapazarlioglu knows these questions only too well. He conducts research at the RUB Faculty of Biology and Biotechnology in the research group of Professor Wolfgang Kirchner. Before coming to Germany in 2020, he worked for 17 years in Turkey as a criminal investigator and as a lecturer at the police academy and a university. At crime scenes, he always kept an eye out for insects. With their help, he was able to determine the time of death more precisely than with other methods. This method is called forensic entomology. It was first established in the USA and is still in its infancy in Europe.

Established in the USA, lack of data in Europe

The knowledge from the USA can’t be simply transferred to Europe, because there are different insect species in different geographical regions and their development is affected by many environmental factors. Local research is needed in Europe in order to use insects to determine the time of death of a corpse here as well. Ersin Karapazarlioglu intends to lay the foundations for this method at RUB. He is conducting research in Wolfgang Kirchner’s team as part of the Philipp Schwartz Initiative, a funding programme for scholars at risk who had to leave their home countries.

Initiative for scholars at risk

In 2015, the Alexander von Humboldt Foundation and the Federal Foreign Office launched the Philipp Schwartz Initiative. It enables researchers who can no longer work in their home countries due to threats or persecution to continue their work at German universities and research institutions. Currently, the programme has three fellows conducting research in biology, history and psychology at RUB. Another fellow will soon join them in the field of geography. The RUB Scholars at Risk programme is managed by the RUB International Office. In addition to the Philipp Schwartz Initiative, it also includes the Scholars at Risk Advocacy Seminar, in which students advocate for unjustly imprisoned academics worldwide as part of human rights campaigns. 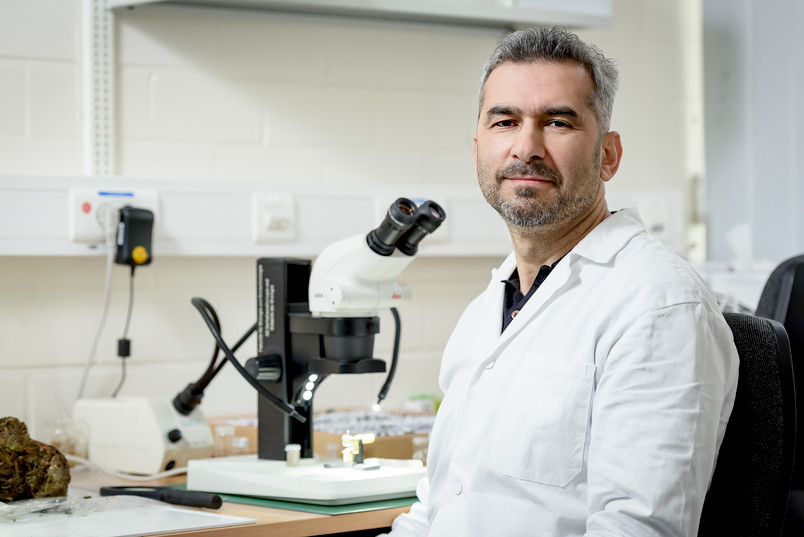 “There are two methods to determine the time of death using forensic entomology,” explains Ersin Karapazarlioglu. “Either you look at the age of the maggots you find on a body, or you look at the different types of insects at the crime scene.” These two methods provide insights on different time scales. Maggot age reveals the time of death a few days to a few weeks after death; insect composition can be consulted months after death.

The underlying principle is as follows: Certain species of flies lay their eggs in the tissue of a corpse as early as one to two hours after death. A few days later, maggots hatch and grow in size with each passing day. If you find a maggot at a certain stage of development at a crime scene, you can deduce how many days old it is and, consequently, when the eggs were laid – which also corresponds approximately to the time of death.

This method works for about a month; then, the maggots will have turned into flies, and another method must be used. This is where species become helpful that don’t arrive at the scene of the crime quite as quickly as the flies, such as various beetles that only appear at a later stage of decomposition. The presence of certain species at the crime scene helps investigators to estimate how many weeks or months ago the death occurred.

“However, environmental factors have a huge impact on both methods,” says Karapazarlioglu. Temperature, for example, affects the speed of the development cycle of a species. The composition of the soil and humidity play a role as well. In addition, other insect species occur in the countryside than in the city, which is why criminal investigators have to take a lot of background information into account.

After a murder, bodies are often buried to cover up the traces of the crime, but not very deeply.

Ersin Karapazarlioglu is currently researching which insect species in Germany are involved in the decomposition process throughout the seasons – and whether it makes a difference how deep a body is buried in the ground. “After a murder, bodies are often buried to cover up the traces of the crime, but not very deeply,” he says. Therefore, the decomposition process may be different than deep underground, but it has hardly been investigated up to now.

To study the effects of burial on the surface, Ersin Karapazarlioglu has constructed a special observation grave. It is closed on one side with a plexiglass pane, allowing the researcher to view the inside. In addition, the researcher has attached devices in eight places to take samples of the soil and the organisms it contains. A sheep, obtained from a butchery, has been buried in the grave for several months.

In forensic entomology, sheep and pigs are used as model organisms, because they have a comparable body weight to humans and their decomposition processes are very similar. Before burial, the sheep are shaved to make the texture of the skin similar to that of humans.

“The idea behind the observation grave is to have access to the animal without disturbing the decomposition process,” as Karapazarlioglu explains his construction. He uses another sheep for comparison, not burying it, but exposing it to decomposition and insect infestation on the surface. Every one to two days, Ersin Karapazarlioglu takes samples from both carcasses and compares the insect compositions. To do so, he has to identify the tiny animals under the microscope – because different species can often only be distinguished by miniscule details.

Insect populations over the seasons

For a second study, Ersin Karapazarlioglu buried another sheep in the summer of 2021, exhuming it once a month; he has already exposed the body six times. Each time he documents the animal’s decomposition status and analyses insect activity. Over the course of the months, there are clear differences: due to the warmer temperatures, numerous insects are found in the grave in summer, while activity decreases significantly in winter. 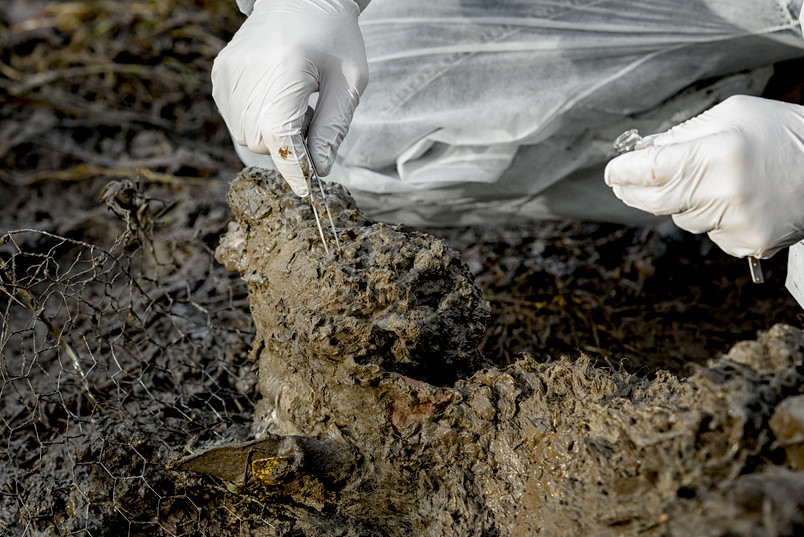 Ersin Karapazarlioglu also documents the decomposition process under these conditions, for example to find out which species are involved at which times of the year.
© Roberto Schirdewahn

“So far, there have only been a few studies on the insect fauna of buried corpses in Europe,” points out Karapazarlioglu. “Therefore, we hope that these experiments will provide valuable data for homicide investigations.”