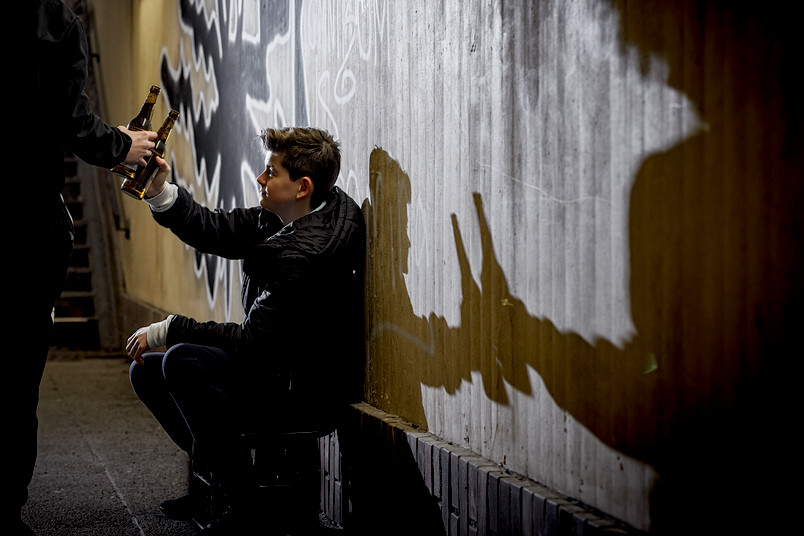 On average, young people in Germany consume significantly more alcohol than in other parts of the world.
© Roberto Schirdewahn
Economic research

In Germany, teenagers are permitted to drink beer, wine and sparkling wine from the age of 16. Alcohol consumption then rises substantially – and so does criminal behaviour.

Germany is one of the world's leaders in alcohol consumption. In 2018, Germans aged 15 and over drank on average 12.9 litres of pure alcohol per capita, according to the World Health Organisation (WHO). Globally, the average alcohol consumption in that year was only approximately six litres per person. In an international comparison, Germany has one of the lowest age restrictions on access to alcohol. German citizens are allowed to consume fermented alcohol, i.e. beer, wine and sparkling wine, as early as 16. Consumption surveys in recent years have shown that approximately 90 per cent of all young people between the ages of 14 and 16 have drunk alcohol at least once in their lives, and in 62 per cent of all cases within the last 30 days.

The number of offences recorded annually by the Federal Criminal Police Office in connection with alcohol consumption is also worrying: approximately 200,000 offences in 2020. In terms of violent crime alone, around one in four suspects had been drinking. The data suggest that there is a direct link between alcohol consumption and crime. Economist Dr. Fabian Dehos documents this very causality in his new study, published in the Journal of Health Economics. In it, the former RUB PhD student shows how the legal regulations in Germany – access to alcohol from the age of 16 – affect underage drinking and criminal behaviour.

For this purpose, Dehos related consumption surveys of teenagers aged 14 to 18 over the years 2005 to 2015 to police crime statistics of the same period. The survey data on alcohol consumption came from two separate sources, the Federal Centre for Health Education and the European School Survey Project on Alcohol and Other Drugs. Getting reliable figures on juvenile delinquency, on the other hand, was much more difficult. “Not all state offices of criminal investigation can provide data,” says Dehos. He eventually found what he was looking for in the federal states of Schleswig-Holstein and Baden-Württemberg. “The data from these two federal states represent the overall German crime behaviour quite well and provide detailed information about young offenders,” says the post-doctoral researcher.

Zooming in on the cut-off

In order to analyse the extent to which alcohol consumption changes after the 16th birthday, Dehos had to zoom in as closely as possible to the legal age limit, the “cut-off”. This way, distorting variables, such as individual exposure to risk or family background, which typically play a major role in consumption and delinquency behaviour, are kept constant. They do not change for young people just above or below the cut-off point.

“In my research, I deliberately focus on the legal cut-off for beer and wine at 16. Despite additional access to spirits at age 18, I don’t look at this cut-off. The 18th birthday constitutes the age of majority in Germany and comes along with too many other changes that affect life of young adults. These changes would bias the results,” explains the economist.

Dehos applies the so-called Regression-Discontinuity-Design (RD) as his research method. It is a common tool in empirical economics to identify causal relationships: How does the change in one variable affect the change in another?

In 2021, economists David Card, Joshua Angrist and Guido Imbens were awarded the Nobel Prize in Economics for their revolutionary, methodological contributions to the analysis of causal relationships. Among other things, all three have significantly refined and advanced the RD analysis.

“The RD method proves particularly useful in my study, because the restriction on access to alcohol ceases from one day to the next at the age of 16. I take advantage of this discontinuity in the age variable,” explains the economist from the RWI – Leibniz Institute for Economic Research in Essen.

The result of the study? “In fact, once the minimum age is reached, a clear increase or jump in consumption behaviour can be seen, both graphically and statistically. Young people in Germany consume alcohol in significantly greater quantities and with significantly greater frequency after the age of 16 than before,” notes Dehos. Comparing the figures on the consumption behaviour of young people 30 days before their 16th birthday with those 30 days after, there is an increase of ten percentage points. While 70 per cent of young people had consumed alcohol before, 80 per cent had done so after their birthday. 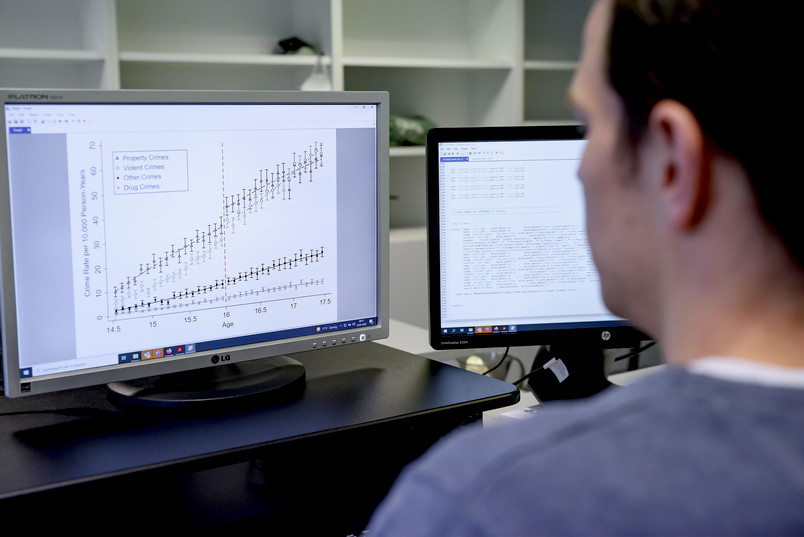 A picture says more than a thousand regressions: In the diagram, the jump of ten percentage points is very easy to see with the naked eye.
© Roberto Schirdewahn

Significant increase in offences committed under the influence of alcohol

But it is not only alcohol consumption that increases substantially once the minimum age is reached. The economist’s analyses also show that there is a direct link between increased alcohol consumption at the age of 16 and involvement in criminal offences. “Out of 10,000 teenagers below the age of 16, an average of 75 per year commit offences under the influence of alcohol. From the age of 16, the number of drunken offences increases by a further 12. This corresponds to an increase of 16 per cent,” points out the economist.

Increase in various types of offences

As outlined in the study, the increase is driven by violent and property crimes: cases of minor and serious assault increase by 17 per cent at 16, cases of vandalism and theft by 20 per cent. These increases occur mainly at weekends, when teenagers are not at school and their day therefore lacks structure. Increases in crime rates were also noted among young women, although young men committed significantly more offences under the influence of alcohol, accounting for 90 per cent of all offences. Another striking fact is the almost exclusive increase of first-time offenders at the age of 16. “Many seem to commit alcohol-induced crime for the first time. Re-offenders under the influence of alcohol don’t become more criminal due to easier access,” says Dehos.

The results of the study show that the minimum age, the access threshold to alcohol at 16, is effective. “This is the good news. The access restriction has an impact. In a world without restriction, teenage consumption and crime levels would be even higher than they already are,” concludes the economist.

And the bad news? “The German consumption level below the age of 16 is very high in a global comparison,” points out Dehos. Additional evaluations show that more than 80 per cent of young people between the ages of 14 and 16 consider access to beer and wine to be easy or very easy. “In this light, a stricter and more consistent enforcement of the legal access restriction could make sense to further reduce this level, too,” says Dehos. In addition, consumption increases at age 16 are not unproblematic. “Young people are still undergoing major functional changes during adolescence – both in terms of neuronal and behavioural development,” stresses the economist. “A higher minimum age for alcohol in Germany could help to reduce the number of teenagers committing crimes and, at the same time, protect their health in this important development stage,” concludes Dehos.

In Germany, young people consume significantly more alcohol on average than in other parts of the world. The level among under-16s is alarmingly high. By comparison: in the USA, according to WHO data from 2011, about 50 per cent of 15-year-olds drink alcohol over the course of a year; in Germany, the figure is about 89 per cent.