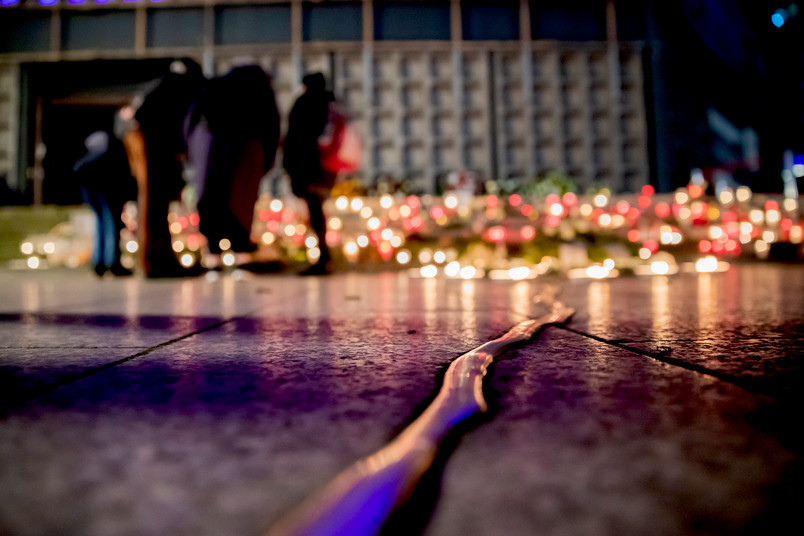 The memorial at Breitscheidplatz commemorates the 13 victims of the terrorist attack. It features a nearly 17-metre-long golden crack in the ground.
© picture alliance/dpa | Christoph Soeder
Constitutional law

The fight against terrorism is a balancing act

Is it necessary to curtail our freedom to improve security? Theresa Bosl analyses how counter-terrorism in Germany might be reformed.

On 19 December 2016, the Tunisian Anis Amri steered a stolen truck into a crowd at Berlin’s Breitscheidplatz Christmas market, killing 12 people and injuring more than a hundred. The Islamist terrorist attack at Christmas time horrified the Federal Republic. Five years, thousands of files, more than 100 meetings and interrogations later, the final report of the competent investigative committee of the Bundestag attested to major mistakes by the security authorities. Theresa Bosl, doctoral student at the RUB Chair of Public Law headed by Professor Pierre Thielbörger, was a research assistant in the German Parliament’s committee investigating the attack. Now that the parliamentary investigation has been completed, the Bochum-based legal scholar is still preoccupied with the Amri case: how can the authorities react more effectively in the future to attack plans that they know about and prevent them? In her PhD thesis, Bosl exposes deficits in the fight against terrorism and discusses reform options from the perspective of constitutional law. 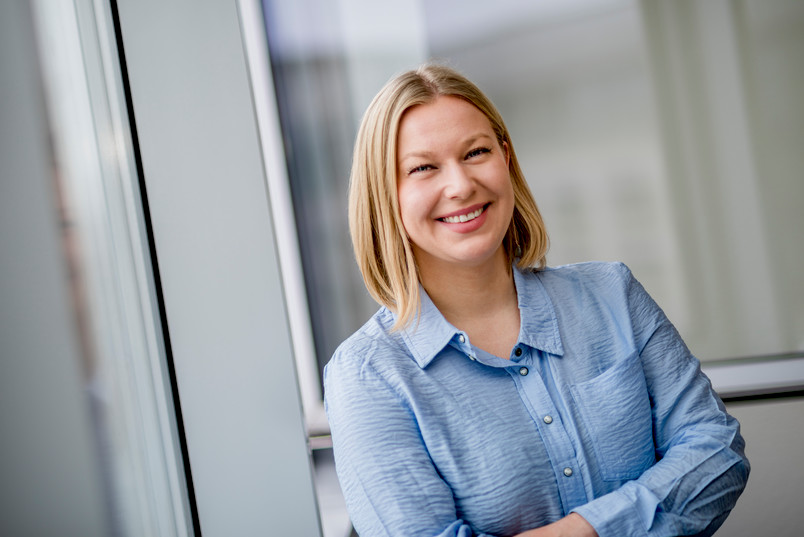 In her PhD thesis, legal scholar Theresa Bosl analyses how counter-terrorism in Germany might be reformed.
© Damian Gorczany

“The committee of inquiry repeatedly addressed the question of guilt,” the PhD student remembers. Much more urgent, however, was the question: how can such attacks be prevented in the future? In the political arena, there are always reflexive calls for more centralisation of powers or of an expansion of competences, for example for surveillance. But are these demands justified? Are the problems in the national fight against terrorism, such as in the Amri case, really rooted in federal structures and a lack of competences, or are they perhaps due to other deficits? Which aspects need to be improved? These are the questions Bosl explores in her doctoral thesis.

... that terrorism refers to serious criminal offences that affect or eliminate the sense of security of an entire society? In this respect, terrorism differs from other crimes: It is directed against the population as a whole, and it attacks the free democratic basic order and values of the Federal Republic of Germany on a large scale.

To this end, the legal scholar takes a closer look at the authorities and the constitutional provisions on their respective competences and duties. “In the process, I primarily assess the executive competences, i.e. those of the security authorities that take operative action in the fight against terrorism. These include, for example, the Federal Intelligence Service (BND), the Federal Criminal Police Office (BKA), the Federal Office for the Protection of the Constitution (BfV) and the respective state authorities,” Bosl explains. 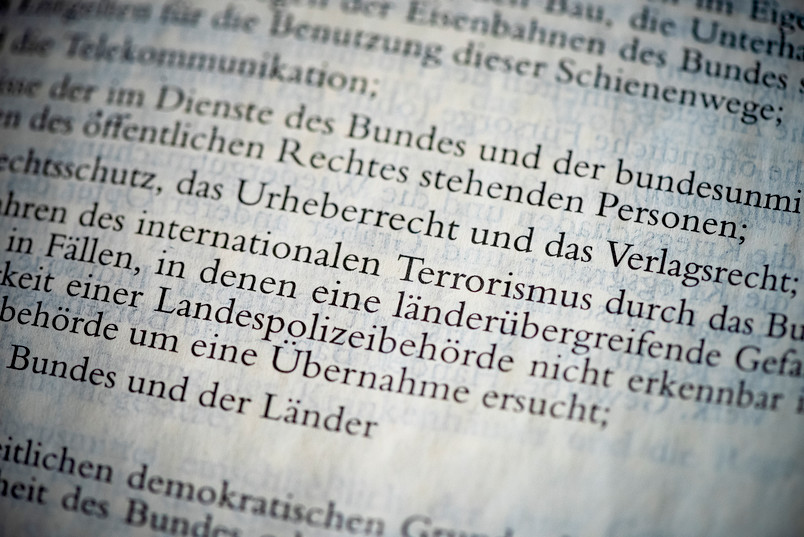 A transnational terrorist threat can fall under the jurisdiction of both the federal government and the federal state under threat.
© Damian Gorczany

According to Articles 30 and 83 of the Constitution, the state authorities are primarily responsible for combating terrorism; the federal authorities only take action in exceptional cases. At both levels, the tasks of the police authorities and the intelligence services must be distinguished from each other.

The security architecture of the Federal Republic of Germany

According to the German constitution, the areas of competence of the intelligence services and police authorities are clearly separated from each other. Unlike the intelligence services, the police authorities act in the open and have the right to intervene directly if a specific danger exists. Intelligence services investigate covertly, collect information on a large scale and in secret, but are not authorised to take active action. The Federal Office for the Protection of the Constitution is exclusively responsible for internal affairs and the Federal Intelligence Service for foreign affairs, while the Military Counterintelligence Service handles matters concerning the Federal Armed Forces and defence.

A nation-wide terrorist threat, as in the case of the terrorist Anis Amri, can fall under the jurisdiction of both the federal government and the federal state under threat and, consequently, lead to different regulations, assessments and decisions. “Since Amri frequently travelled back and forth between Berlin and NRW, this means that not only the competences of the different security authorities, such as the police and the Office for the Protection of the Constitution overlapped, but also those of the different federal states,” Bosl explains.

The PhD researcher points out: “Demands for centralisation and expansion of powers are sub-complex answers to a highly complex problem.” Federal structures can lead to a loss of effectiveness, but the main problem is usually one of cooperation or coordination and not the actual distribution of competences. Bosl is convinced: “As a rule, it is precisely the local security authorities who know the relevant scenes and actors best and, consequently, can make the most reliable threat assessment.” This could, of course, become problematic if a particular threat affects more than one federal state. This is especially true if the federal states in question take different approaches: “In this case, there is no final decision-making authority.” 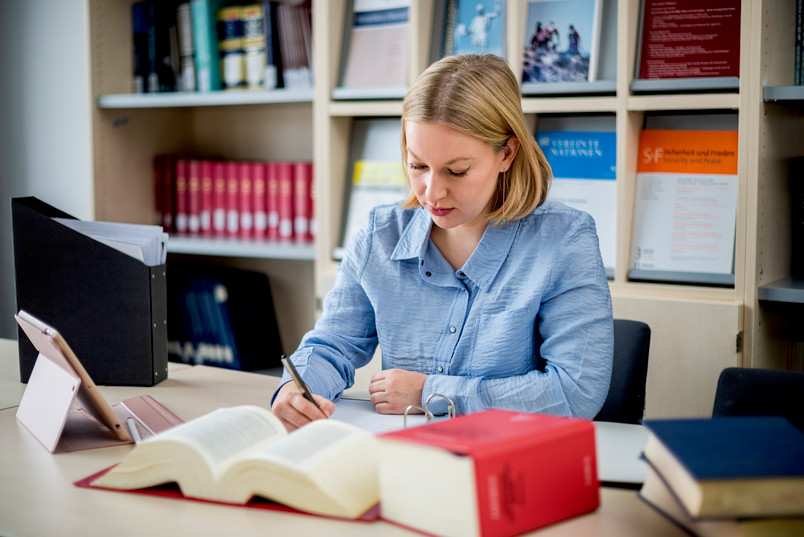 In her thesis, Bosl therefore also discusses the idea of granting the BfV and BKA as federal authorities separate powers of investigation and instruction, so that in the future a uniform approach can be taken in cases involving more than one federal state. “It might have improved the investigation in the Amri case if the Federal Criminal Police Office had been allowed to issue instructions to the state criminal police offices involved in the matter.” She is also examining whether the Constitution would allow this expansion or whether the two offices, as central offices, must be limited to mere coordination between the federal states.

In her analysis of the security structures, the legal scholar criticises above all the lack of effective cooperation mechanisms. “The disastrous factor in the Amri case was that the two federal states had different views on how great a threat he was; as a result, they adopted contradictory measures that made Amri suspicious and thus impeded the success of an investigation,” Bosl explains.

How can the problem be solved? The researcher suggests strengthening platforms in which representatives of all security authorities exchange information on a daily basis, such as the Joint Counter-Terrorism Centre. “In these centres, there are currently no binding agreements and specifications on which steps are to be taken by which authority when there is a potential threat,” Bosl criticises. However, the implementation of such a solution is problematic from a constitutional perspective: “These exchange platforms have not been regulated by law so far. The intensive and unregulated exchange of data impairs the fundamental right to freedom of informational autonomy.” Bosl therefore calls for binding legal foundations to be created, in order to protect fundamental rights and improve communication. “The committee of inquiry has revealed that politicians are not doing the security authorities any favours if there are no legal foundations and if the responsibilities are unclear,” stresses the legal scholar. 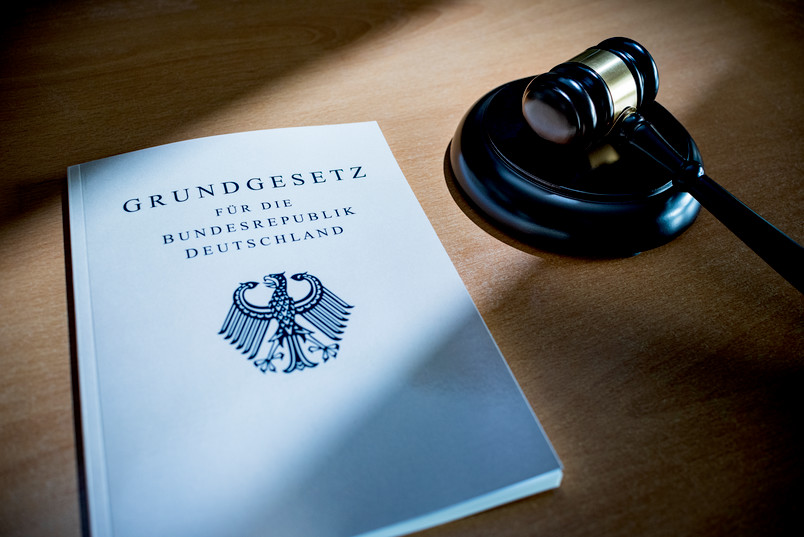 The governmental mandate to fight terrorism is mentioned, among other things, in the first paragraph of Article 73 of the Basic Law.
© Damian Gorczany

The researcher addresses another acute problem in the current structure of the public authorities. “Our security agencies are organised into domestic and external security: while the BND deals exclusively with terrorist threats from abroad, the BfV is in charge of national terrorist threats,” she explains. According to her, this division is outdated and no longer reflects reality. “Today, terrorists act globally by networking digitally and crossing borders with relative ease,” describes Bosl. There is no longer national and international terrorism. “We observe this not only in the field of Islamist terrorism, but also in right-wing terrorism.” Her proposal is therefore to reorganise the authorities by different phenomenon areas. When it comes to specific movements, she says, special expertise and special understanding of the scenes, code words and environments is needed.

Bosl also finds the work of the many supervisory bodies and committees that monitor the activities and procedures of the security authorities in need of reform. The fact that there are so many supervisory bodies, such as the G10 Commission, the Parliamentary Oversight Panel and the Federal Commissioner for Data Protection and Information Security, is an important step in the right direction. However, the number alone does not ensure effectiveness. “Up to now, these supervisory bodies have only been equipped with insufficient monitoring mechanisms. This has also been explicitly stated by the Federal Constitutional Court for the monitoring of the BND,” Bosl explains. She is examining whether it would be more effective to bundle control and involve more trained personnel instead of a multitude of bodies with inadequate powers.

Lastly, Bosl criticises the fact that the competences of the authorities and their powers are not only insufficiently monitored, but also communicated in a non-transparent manner. What happens inside the individual authorities? How concrete must the threat be for intervention? Under what conditions may the state collect information and store data? Who is allowed to monitor me and when? Bosl finds it highly problematic that in the fight against terrorism, citizens have no way of knowing whether they are personally affected by covert measures, such as the use of government malware. “Essentially, it must be possible to understand what the security authorities are doing, at least in the abstract,” says the legal scholar. It is therefore all the more important to create a concrete legal basis for how data is handled, to control the authorities more closely and to ensure greater transparency for the public.

The point is not to fundamentally stir up mistrust in the state. “We all agree that security is a valuable commodity. And that effective action must be taken and that we must accept encroachments on our fundamental rights. But not to a disproportionate extent. And above all, not in such a non-transparent way that the public can’t see what is happening at all.” The state’s duty of fighting all forms of terrorism stems from its duty to protect the life and limb of its citizens. However, the state must not disproportionately interfere with the other fundamental rights of its citizens.

What goes on behind the doors of the Federal Intelligence Service?
© S. J. Müller / BND

“At present, we simply don’t know when our fundamental rights are infringed upon. This makes it practically impossible to enforce personal rights and control such measures through the courts,” points out Bosl. Fundamental rights concerns and secrecy interests must be weighed against each other, and a careful balance between freedom and security considerations must be found.

Bosl is currently assessing whether the reform options that have been drawn up would be compatible with the constitution: does the Constitution contain provisions that might stand in the way of the reforms? Does the Constitution permit a division into certain phenomenon areas? Would it be possible to restructure supervisory bodies? To this end, the legal scholar studies the relevant articles of the Constitution, examines their exact wording and discusses the purpose of the provisions. In addition to the legal texts, she also includes in her analysis the historical genesis of the articles, their interpretations by the courts and the reports of the investigative bodies in individual cases (Breitscheidplatz attack, NSU, assassination of Walter Lübke). 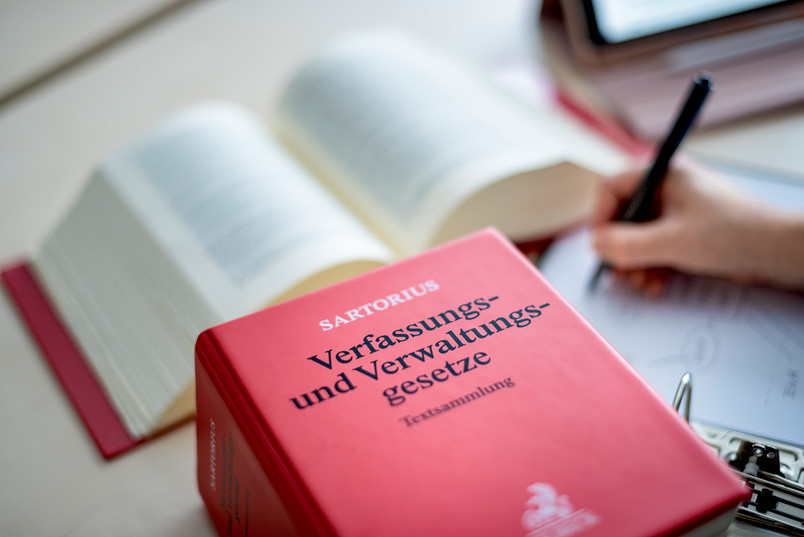 The legal scholar assesses whether the reform options that have been drawn up would be compatible with the constitution.
© Damian Gorczany

With her thesis, Bosl hopes to spark a discourse on reforms in politics and society. Her research is intended to help ensure that future reforms lead to structural improvements in the fight against terrorism in the long term, without jeopardising the balance between freedom and security. Ideally, this would reduce the risk of a terrorist attack like the one in December 2016 in the future.