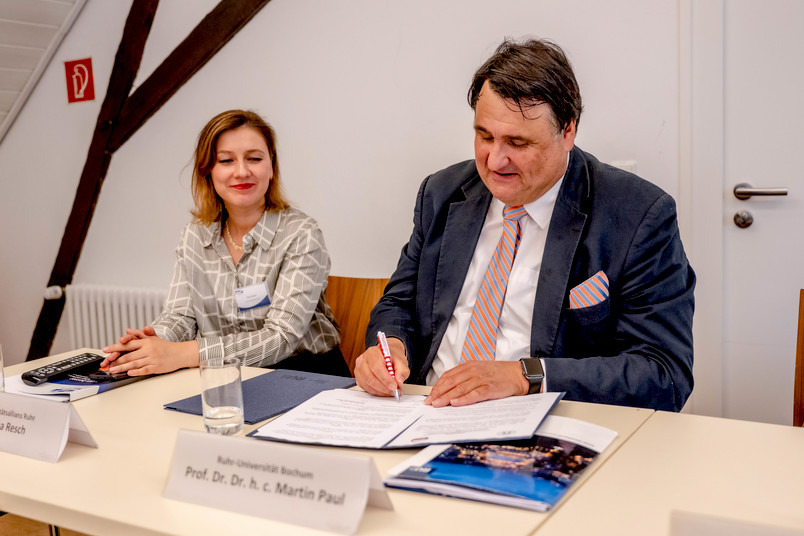 Partnership with University of Kyiv

In the midst of the Russian war of aggression against Ukraine, RUB is setting an example: For the first time, it has welcomed a Ukrainian university into its tight-knit partnership network.

For the first time in its almost 60-year history, RUB has formed a university-wide partnership with a university from Ukraine. Rector Professor Martin Paul signed the cooperation agreement with the Rector of Taras Shevchenko National University of Kyiv (TSNU), Professor Volodymyr Bugrov, via video conference on August 1, 2022.

The appropriate setting for the signing of the agreement was made possible by the first Summer School of the University Alliance Ruhr (UA Ruhr) with 30 students from five Ukrainian universities, including TSNU. "I am happy and proud that we have succeeded in organizing this first UA Ruhr Summer School for students from Ukraine," said Rector Paul. The nine-day stay of the students and their supervisors is organized by the International Office of RUB and the Liaison Office Eastern Europe/Central Asia of UA Ruhr under the leadership of Elena Resch.

The partnership with TSNU is a university-wide cooperation, meaning that it is not limited to certain faculties. With a joint interdisciplinary teaching project and a targeted aid effort, the new friendship is already taking shape through various action steps

In mid-July, Rector Martin Paul presented TSNU's Rector and Vice-Rector for International Affairs, Professor Kseniia Smyrnova, with two new defibrillators worth several thousand euros. For this, the Ukrainian delegation made an extra detour to Bochum – on its way from Leiden University in the Netherlands to the University of Erlangen-Nuremberg, in order to personally receive the devices, which were still in their original packaging. "The defibrillators are urgently needed in Ukraine, so we can provide concrete help," said Professor. Kornelia Freitag, Vice Rector for Academic Affairs. "I'm particularly pleased that our administration has made it possible for us to help here in an unbureaucratic, quick, and targeted way, without unnecessary administrative hassle."

To enable Ukrainian students of natural science subjects to continue their studies, teachers and students from the RUB and TSNU are developing variants of laboratory practice on a project. The project Digital Laboratories for Students at risk - DigiLabStar - is funded by the German Academic Exchange Service with about 143,000 euros and runs until the end of 2022. For more information, see this detailed report on the project launch (German website).

The UA Ruhr Summer School will take place until August 8 at UA Ruhr campuses in Bochum, Dortmund, and Essen. The extensive program includes campus tours, workshops, seminars, discussions with the rectorates and individual faculties, as well as visits to the Museum Folkwang, Planetarium Bochum, Zeche Zollverein, and individual cities in the region and the Rhineland. "With our offer we strive to strengthen existing cooperation with Ukrainian universities and to initiate new ones according to possibility and need", says Elena Resch. "Another important goal is to give Ukrainian students the opportunity – especially in these difficult times – to come to the Ruhr region and get to know our universities."

The following Ukrainian universities are participating in the summer school: