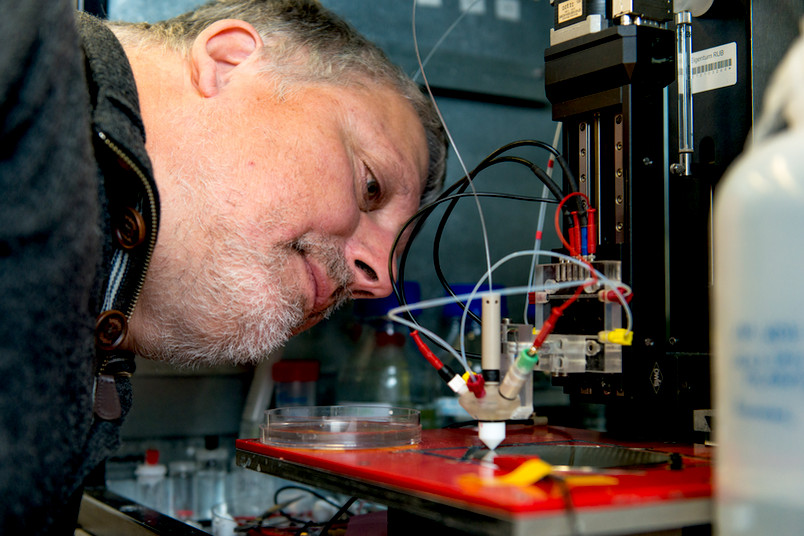 Water electrolysis has not yet established itself as a method for the production of hydrogen. Too much energy is lost in the process. Researchers have now doubled the efficiency of the reaction.

In the journal “Nature Communications”, researchers from the Ruhr-Universität Bochum, Technical University of Munich and Universiteit Leiden report in what way the efficiency of electrodes can be increased for the purpose of water electrolysis. Typically, platinum is applied as catalyst, in order to accelerate the conversion of water to hydrogen and oxygen. For the reaction to be as efficient as possible, intermediates must not adhere too strongly or too weakly at the catalyst surface.

The team headed by Prof Dr Aliaksandr Bandarenka from the Department of Physics of Energy Conversion and Storage in Munich and Prof Dr Wolfgang Schuhmann from the Center for Electrochemical Sciences in Bochum has calculated how strongly intermediates must adhere to the electrodes, in order to most efficiently facilitate the reaction. The analysis revealed that traditional electrodes from platinum, rhodium and palladium bind the intermediates a bit too strongly.

The researchers modified the properties of the platinum catalyst surface by applying a layer of copper atoms. With this additional layer, the system generated twice the amount of hydrogen than with a pure platinum electrode. But only if the researchers applied the copper layer directly under the top layer of the platinum atoms. The group observed another useful side effect: the copper layer extended the service life of the electrodes, for example by rendering them more corrosion-resistant.

Water electrolysis has not yet been implemented on a large scale

Only four per cent of all hydrogen produced worldwide are the result of water electrolysis. As the electrodes used in the process are not efficient enough, large-scale application is not profitable. “To date, hydrogen has been mainly obtained from fossil fuels, with large CO2 volumes being released in the process,” says Wolfgang Schuhmann. “If we succeeded in obtaining hydrogen by using electrolysis instead, it would be a huge step towards climate-friendly energy conversion. For this purpose, we could utilise surplus electricity, for example generated by wind power.”

“In addition, the research on this reaction allows us to test, how well we can design catalyst surfaces by precisely positioning different metal atoms,“ adds Aliaksandr Bandarenka. „A knowledge many other catalytic processes might benefit from.”

The German Research Foundation has financed the project under the umbrella of the Clusters of Excellence Resolv (EXC 1069) and Nanosystems Initiative Munich (NIM). Additional funding was supplied by the Helmholtz-Energy-Alliance “Stationary electrochemical storage systems and converters” (HA-E-0002).