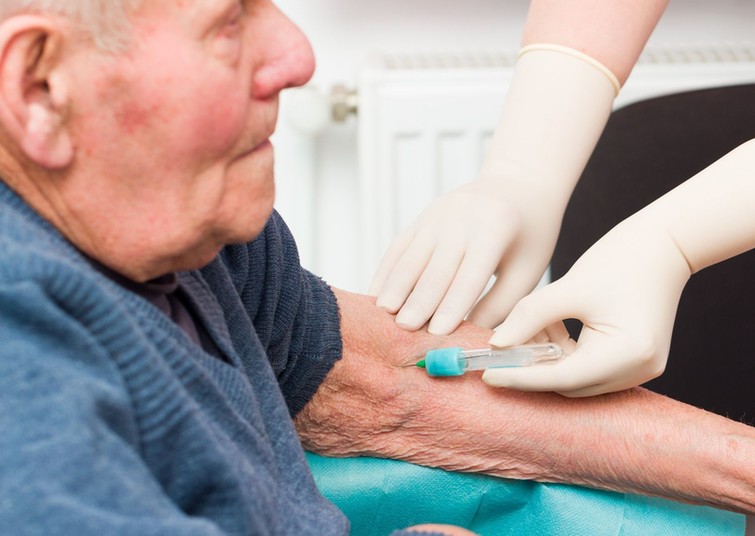 A new blood test may facilitate the detection of Alzheimer’s at an early stage.
© Fotolia, Barabas Attila
Biotechnology

Researchers have implemented a blood test which may in future facilitate the detection of Alzheimer’s at an early stage.

Today, Alzheimer’s disease is diagnosed too late. In collaboration with a research team at the university and German Center for Neurogenerative Diseases (DZNE) in Göttingen, Researchers at Ruhr-Universität Bochum (RUB) have developed a blood test that may potentially facilitate detection of Alzheimer’s at an early stage. It is based on an immuno-chemical analysis using an infrared sensor. The sensor’s surface is coated with highly specific antibodies which extract biomarkers for Alzheimer’s from the blood or the cerebrospinal fluid, taken from the lower part of the back (lumbar liquor).

The infrared sensor analyses if the biomarkers show already pathological changes, which can take place more than 15 years before any clinical symptoms appear. This method has been featured as the cover story in the internationally renowned academic journal “Biophotonics”, and the results of the study were also published in “Analytical Chemistry”.

In most instances, diagnosis is too late

A major problem of Alzheimer’s disease diagnosis is the fact that, by the time the first clinical symptoms appear, massive irreversible damage to the brain has already occurred. At that point, symptomatic treatment is the only available option. “If we wish to have a drug at our disposal that can significantly inhibit the progress of the disease, we need blood tests that detect Alzheimer’s in its pre-dementia stages,” says Prof Dr Klaus Gerwert, Head of the Department of Biophysics at RUB.

“By applying such drugs at an early stage, we could prevent dementia, or at the very least delay its onset,” adds Prof Dr med. Jens Wiltfang, Head of the Department for Psychiatry and Psychotherapy at the University of Göttingen and Clinical Research Coordinator at DZNE Göttingen.

For the novel test, the secondary structure of the so-called Amyloid beta peptides serves as biomarker. This structure changes in Alzheimer’s patients. In the misfolded, pathological structure, more and more Amyloid beta peptides can accumulate, gradually forming visible plaque deposits in the brain that are typical for Alzheimer’s disease. This happens more than15 years before first clinical symptoms appear. The pathological beta Amyloid plaques can be temporarily detected by positron emission tomography, short: Amyloid PET; but this procedure is comparatively expensive and is accompanied by radiation exposure.

Together with Jens Wiltfang from Göttingen, the team headed by Klaus Gerwert has developed an infrared sensor for detecting misfolding of Amyloid beta peptides as part of the PhD research projects of Andreas Nabers and Jonas Schartner. The infrared sensor extracts the Amyloid beta peptide from body fluids. The method is patent pending. After initially working with cerebrospinal fluid, the researchers subsequently expanded the method towards blood analysis.

“We do not merely select one single possible folding arrangement of the peptide; rather, we detect how all existing Amyloid beta secondarystructures are distributed, in their healthy and in their pathological forms,” says Gerwert. Precise diagnostics is not possible until the distribution of all secondary structures is evaluated.

Tests that analyse Amyloid beta peptide are already available with so-called enzyme-linked immunosorbent assays (Elisa). They identify the total concentration, percentage of forms of different length, as well as the concentration of individual conformations in body fluids; but they have not, as yet, provided information on the diagnostically relevant distribution of the secondary structures at once. “This is why Elisa tests have not been proven very effective when applied in blood sample analysis in practice,” explains Klaus Gerwert.

Using the methods now developed in Bochum and Göttingen, the researchers have analysed samples from 141 patients. They have achieved a diagnostic precision of 84 per cent in the blood and 90 per cent in cerebrospinal fluid, compared with the clinical gold standard. The test revealed an increase of misfolded biomarkers as spectral shift of Amyloid beta band below threshold, thus diagnosing Alzheimer’s. “What’s unique about it is that this is the only robust label-free test with a single threshold,” as Andreas Nabers describes the result of his dissertation.

A potential sensor for early detection

As part of the published study, the researchers have tested the potential for early detection of Morbus Alzheimer’s on a small group of patients. The results suggest that even in pre-dementia stages, an increased concentration of misfolded Amyloid beta peptides can be detected in body fluids. Thus, Morbus Alzheimer’s may in future be diagnosable in preclinical stages. “The sooner Alzheimer’s is detected, the better the therapy chances. This sensor is an important milestone in the right direction,” adds Prof Dr Jens Wiltfang. Currently, sample analyses for early detection in 800 study participants are being conducted, in order to optimise statistical significance.

The funds for the project have been supplied by PURE (Protein Research Unit Ruhr within Europe), the spokesman of which is Prof Dr Klaus Gerwert.