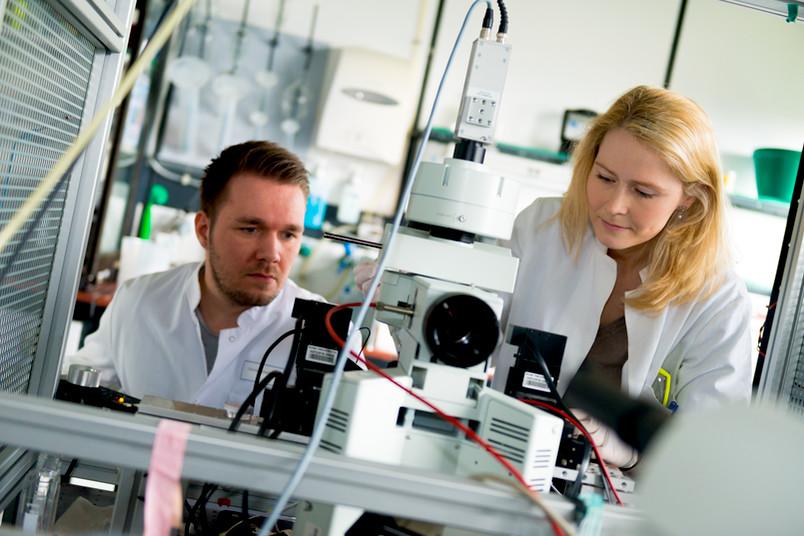 Switching signalling pathways on and off

Blue on, yellow off: using different-coloured light, researchers are able to switch signalling pathways in the brain on and off.

Researchers in Bochum have utilised light-sensitive proteins from nerve cells of the eye – so-called melanopsins – to switch on specific signalling pathways in brain cells with high temporal precision. Depending on what kind of melanopsin the researchers used, signalling pathways were switched on either transiently or sustained. In mammals, the protein typically regulates the circadian rhythm.

Dr Katharina Spoida, Dennis Eickelbeck, Prof Dr Stefan Herlitze and Dr Olivia Masseck from the Department of General Zoology and Neurobiology at the Ruhr-Universität Bochum (RUB), together with other colleagues from Bochum and researchers from the University of Osnabrück report in the journal “Current Biology”.

Comparison: melanopsin of mice and men

The researchers describe, for example, that melanopsins of mice and of men respond differently to light stimulation. Short blue light pulses activate mouse melanopsin permanently, but human melanopsin only temporarily. Both proteins can be switched off with yellow light.

In the next step, the RUB researchers wish to develop G-protein-coupled receptors that can be activated by light. These receptors control a number of functions in the body. Which signalling pathway is switched on in the cell is determined by whether a G-protein is activated transiently or sustained. Changes to the G-proteins’ temporal activation patterns may result in serious diseases, for example obesity or cardio-vascular diseases.

Insights into the complex serotonin system

By controlling selected individual signalling pathways using optogenetic methods, the role they play in the healthy organism can be determined. Researchers may also be able to find out which signalling pathways affect the occurrence of certain diseases.

“In follow-up studies, we intend to couple various melanopsins to serotonin receptors and analyse in greater detail the way diseases are triggered by disturbances of the temporal sequence of G-protein signals,” reports Katharina Spoida, who was in charge of the current study, together with Dennis Eickelbeck.