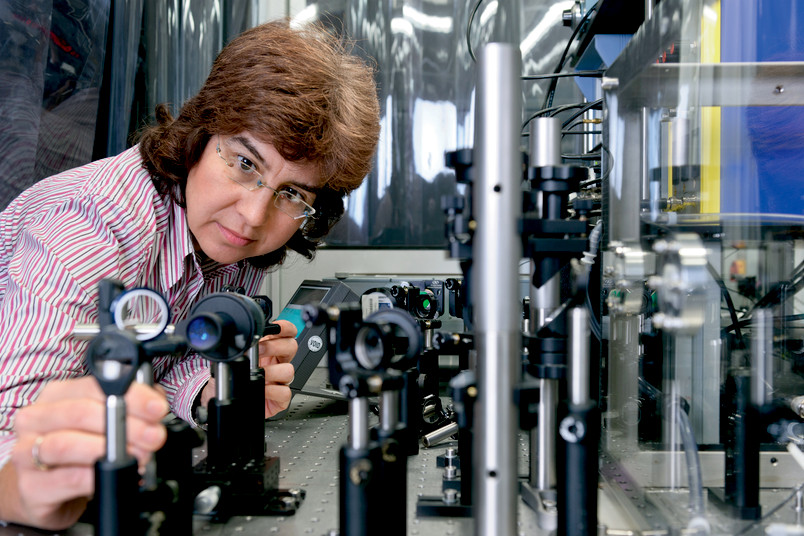 The pan-European funding body ERC (European Research Council) will finance the team of Prof Dr Martina Havenith from the Ruhr-Universität Bochum (RUB) with 2.5 million Euros in five years to develop a ground-breaking methodology called “Time-Resolved THz-Calorimetry”. Scientists will tinker with Terahertz (THz) laser spectroscopy to deduce with nanosecond precision how proteins and solvent exchange energy and rearrange themselves in a biological process.

Martina Havenith, Chair of the Department of Physical Chemistry II at RUB and speaker of the cluster of excellence "Ruhr Explores Solvation" (Resolv), will lead an international team with Prof Dr Irit Sagi’ from the Weizmann-Institute in Israel and Dr Matthias Heyden’s from the Max-Planck-Institute for Coal Research in Mülheim at the Ruhr.

In the current application round for the hotly contested Advanced Grants, two researchers from the Ruhr-Universität Bochum have been successful. In addition to Martina Havenith, IT security expert Prof Dr Christof Paar also raised such a grant. Via these two projects, the RUB can receive 5 million euros in total.

The European Union launched the European Research Council in 2007 to fund excellent research in Europe. The ERC Advanced Grants program targets senior researchers with ground-breaking ideas that may be risky to pursue, awarding up to 2.5 million for five years. The 2015 call received 1.953 project applications from 29 countries, but only about 14 % of them got selected after a peer review process made on the basis of excellence as sole criterion. “I received the message at the Zürich airport after an 11 hour flight. I had to read it three times before I believed it. It is such a great chance to test some exciting new ideas”, says Havenith.

The underestimated role of water in biology

Fundamental biological processes like protein folding, protein-protein interactions and enzymatic reactions take place in watery solutions and depend upon the ability of the reacting molecules to recognise themselves in a solvent. Molecular recognition is mediated through various chemical interactions that can be studied by calorimetry, measuring enthalpy (heat transfer), entropy (a measures of disorder for a system) and other associated energetic parameters.

Unfortunately, current calorimetric approaches are all based on heat transfer, hence they deliver results on time scales of 1 to 100 seconds and can analyse the system only at equilibrium, i.e. when molecules are already bound. However, as Havenith points out, a successful reaction is the result of a dynamic interplay between the partner molecules and the solvent. THz-Calorimetry promises to investigate these processes, for the first time in real time with a million time better time resolution.

The new technique will use THz light sources (1012 Hertz = 1 Terahertz) to excite solvent molecules and biomolecules at the time scales of hydrogen bond dynamics in water as well as large amplitude motions of proteins and nucleic acids. “If we are able to collect full information on these time-scale dynamics, we can deduce quantities like entropy, enthalpy, etc. associated with molecular recognition processes”, says Havenith.

Time-Resolved THz-Calorimetry will also offer, for the first time, the chance to directly access the distinct contributions of the solute entropy changes versus those of the solvent. To this end, the Bochum-based project will combine the expertise collected in THz laser development with microwave technology, biophysics, calorimetry and theoretical modeling. “Interdisciplinary discussions within Resolv were crucial to inspire us the THz calorimetry idea”, says Havenith.