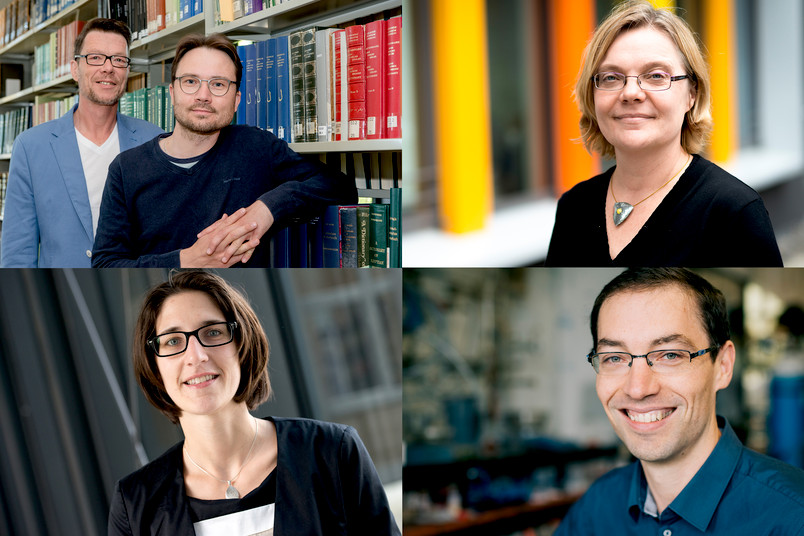 The European Research Council is supporting four new projects at the Ruhr-Universität Bochum with sums in the millions. Here is what the scientists want to research using these funds.

A full five researchers at the Ruhr-Universität Bochum (RUB) are delighted at the funding from one of the large Starting Grants of the European Research Council (ERC).

Grants totaling 1.5 million Euro for five years were made to Prof Dr Viktoria Däschlein-Gessner, Chair of Inorganic Chemistry II, Dr Elisabeth de Boer, Department of Japanese Language and Literature, and Dr Nicolas Plumeré, Molecular Nanostructures Research Group. Dr Rüdiger Arnzen and Dr Yury Arzhanov of the Seminar for Oriental and Islamic Studies are participating in an international project in cooperation with the Austrian Academy of Science.

With funds from the ERC Starting Grant, Viktoria Däschlein-Gessner wants to develop new ligand systems with unique bonding properties. These chemical systems are bound to metals, for example to influence the activity of catalysts or to stabilize reactive compound.

With experiments and computer-based studies, her team will set up new systems which have an electron-rich carbon atom at their core. This is designed to make it possible to specifically control the characteristics and reactivity of the bound atoms and groups.

Viktoria Däschlein-Gessner studied chemistry in Marburg and Würzburg and got her doctorate in 2009 at the Technische Universität Dortmund. After a postdoctoral stay at the University of California in Berkeley, she led an Emmy Noether Junior Research Group at the Universität Würzburg, where she got her habilitation in 2015. Since July 2016, she has been working at RUB.

Nicolas Plumeré wants to use the ERC funds to move closer to applications for highly active, but fragile catalysts for energy conversion. It is a challenge to transform energy from renewable energy sources into a form that can be stored, for example the chemical fuel hydrogen. Currently, doing so usually requires using the expensive and rare metal platinum as a catalyst.

The goal of the chemist is to create a less expensive alternative by making it possible to use naturally occurring enzymes that contain nickel or iron for this purpose. Since catalysts of such elements are often unstable, the researcher wants to embed them in a stabilizing matrix.

Nicolas Plumeré studied chemistry in Strasbourg and Glasgow and got his doctorate in 2009 at the Universität Tübingen. Since 2010, he has been the Junior Research Group Leader at the RUB Center for Electrochemistry and does research in the Excellence Cluster Resolv.

Migration of peoples in prehistoric Japan

The linguist Elisabeth de Boer will use the ERC grant to study how the Japanese language came to Japan and how it spread there. The Japanese dialect differs very greatly in different regions of the country. However, contrary to expectations, the dialects in some areas quite far apart from one another have very similar characteristics.

In the first step of her project, de Boer wants to create a reliable family tree of the dialects, using field studies, linguistic analyses, and research in documents written in older dialects. The results are designed to provide insights into the migration pathways of the prehistoric populations that spread the Japanese language across the islands.

From the Greek into Syrian and Arabic

Yury Arzhanov and Rüdiger Arnzen want to create a lexical database with Syrian and Arabic translations of scientific and philosophical works that originated in Greece. They are participating in an ERC Starting Grant totaling 1.5 million Euro; Principal Investigator is Dr Grigory Kessel of the Austrian Academy of Science.

The Islamic culture had links to the science and philosophy of ancient Greece. Arabic translators conveyed the Greek writings into Arabic, a process in which Syrian-speaking scholars often acted as the mediators. One challenge, for example, was to find corresponding Syrian and Arabic terms.

The new database – which bears the artificial name of “Hun@aynNet” compares the Syrian texts with the Greek originals and the associated Arabic versions, in order to get systematic insights into the terminology and translation techniques used.