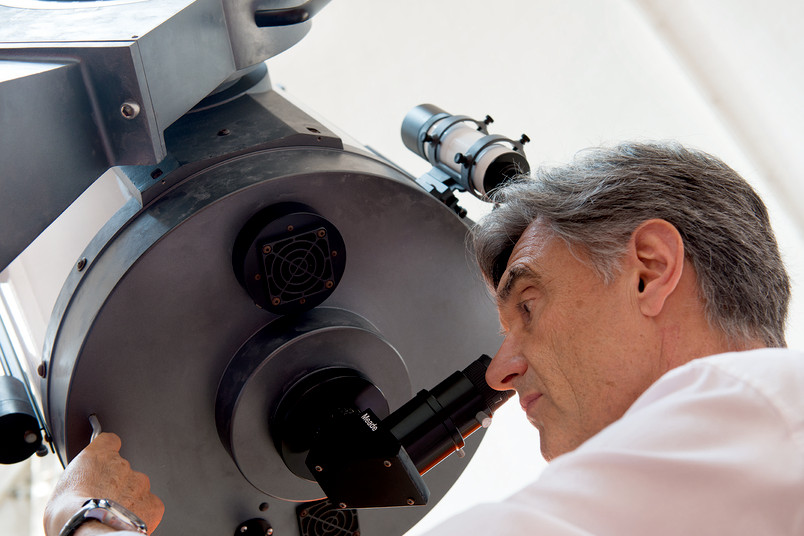 Rolf Chini has been researching approximately 400 stars in the vicinity of the sun that share some of the sun’s properties for many years. In the process, he and his team have made a very interesting discovery.
© RUB, Nelle
Astronomy

Presumed young star turns out to be a galactic senior citizen

It was considered a teenager among the stars. But now one thing has become clear: this celestial object was formed when our galaxy was born. Why did researchers get it wrong for many decades?

49 Lib, a relatively bright star in the southern sky, is twelve billion years old rather than just 2.3 billion. For many decades, researchers were stumped by conflicting data pertaining to this celestial body, because they had estimated it as much younger than it really is. Determining its age anew, astronomers at Ruhr-Universität Bochum (RUB) have now successfully resolved all inconsistencies. Dr Klaus Fuhrmann and Prof Dr Rolf Chini published their results in the “Astrophysical Journal”.

“It had previously been assumed that the star was only half as old as our sun,” says Chini. “However, our data have shown that it had been formed at the time that our galaxy was born.” The reason for the error: the celestial object is a dual star system, as was proved by another research group in 2016. Chini’s team has now demonstrated the mechanism used by the star partner of 49 Lib to fake its age.

The partner of 49 Lib is an almost extinguished star that is as good as invisible. At the end of its life, it had transferred a part of its matter to 49 Lib – this is what had made the estimation of age so confusing.

Scientists determine the age of stars based on their chemical composition. Old stars that had been formed during an early stage of the universe do not contain any heavy elements. This is because those elements were generated later, following the nuclear fusion of many generations of stars. Young stars such as our sun possess heavy elements, because they have emerged from the remnants of past generations of stars.

Giant at the close of its life

As the mysterious star 49 Lib contains heavy elements, researchers used to think for many decades that it is a relatively young celestial body. However, the team from Bochum has found out that the heavy elements did not originate on 49 Lib, but had been transferred to it from its invisible companion.

At the end of their life, stars become huge; so huge that their own gravity is no longer sufficient to keep the matter together. The matter escapes as gas into space. Should there be another star in its vicinity, its gravity might attract and absorb the expelled matter. This is how 49 Lib gained its heavy elements.

Determining the age of stars

Astronomers determine the age of stars based on their spectra. They break the light emitted by the star into its individual components and decode the wavelength at which the star emits most light. The composition of a star’s chemical elements determines the spectrum.

Based on their data, the RUB researchers did more than just specify the age of the analysed star. “We are able to track this dual system’s entire evolution,” explains Rolf Chini. The astronomers know, for example, the masses with which the star’s life had begun and how those masses have evolved since then.

From white dwarves to supernova

At first, both stars had similar mass properties as the sun. When 49 Lib took over a part of the matter of its extinguishing partner, it gained a weight of approximately 0.55 solar masses. The more mass a star, the shorter its lifespan. The weight gain has thus reduced 49 Lib’s lifespan dramatically. “It will soon become a red giant and then collapse into a white dwarf,” as Rolf Chini describes its fate.

As a red giant, 49 Lib will no longer be able to keep its matter together, undergoing the same process that its star partner underwent as it turned into a white dwarf. Part of the matter of 49 Lib will be attracted by its extinguishing star partner. “If that partner cannot rid itself of the matter in small eruptions, it will fully explode as a supernova,” says Chini.

The German Research Foundation financed the study under the umbrella of the FU 198/11-1 grant.