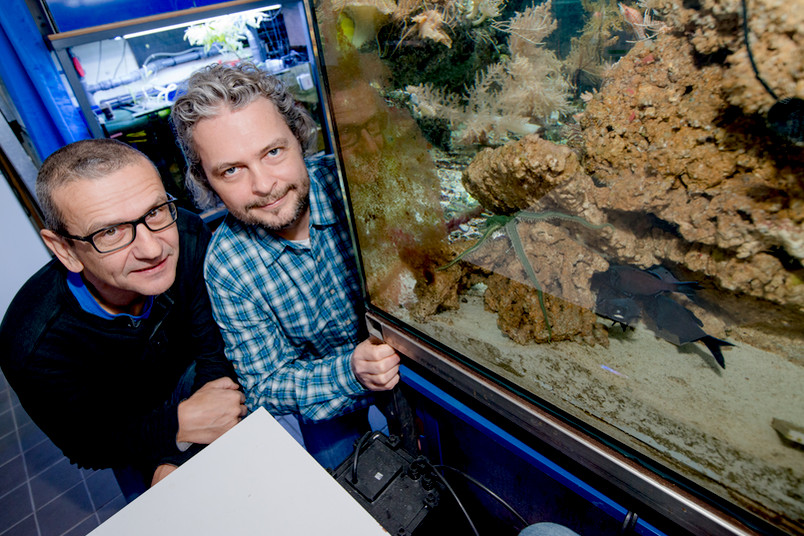 The flashlight fish is one of the few marine animals that can be kept in an aquarium. Stefan Herlitze (left) and Jens Hellinger study its luminescence.
© RUB, Marquard
Behavioural Biology

The firefly among fish

Thanks to glowing bacteria in special organs below their eyes, flashlight fish send out flashing signals at night. Biologists from Bochum have researched their purpose.

The flashlight fish Anomalops katoptron, which inhabits the coral reefs of the Pacific, uses flashing signals to forage for food at night. The moment it finds food, the flashing signal changes to a permanent glow while the fish is feeding. In addition to the lighting conditions in its surroundings, the presence of food also determines the bioluminescence of the fish. This fact was discovered by behavioural biologists headed by Prof Dr Stefan Herlitze and Dr Jens Hellinger. The researchers thus identified the purposes of bioluminescence in this fish species. The same question still remains open for many other glowing marine creatures. The researchers published their report in the Plos One edition from February 8, 2017.

Flashlight fish, also referred to as lantern-eye fish, live in swarms of eight to 50 animals that hunt plankton on coral reef roofs at night. During the day, the fish withdraw to a depth of up to 400 metres, where they presumably rest in underwater caves. They have light organs below their eyes which can be rotated backwards and which contain bioluminescent symbiotic bacteria. By rotating their light organs, the fish generate flash patterns in different frequencies. To date, researchers could only speculate about the light organs' function.

“Deploying methods of behavioural biology, we have now successfully demonstrated that Anomalops katoptron uses its light organs while foraging, and it adjusts the flash frequency to the context in which it operates,” as Stefan Herlitze and Jens Hellinger explain. For their analysis, the researchers utilised watertight infrared spotlights, developed in collaboration with the faculty workshop for this specific purpose.

They observed that the fish blink 90 times per minute on average during the night. Once the researchers add zooplankton to the water, the animals promptly reduce their flash frequency and emit an almost continuous glow while feeding. Non-glowing control animals of the same species hardly ever caught any prey. They didn’t exhibit any changes to blink frequency in the presence of zooplankton, either. The blink frequency in non-glowing fish can be determined by monitoring light organ rotation. “The results clearly indicate that Anomalops katoptron relies on its light organs while foraging for food,” conclude Stefan Herlitze and Jens Hellinger.

Moreover, the researchers have demonstrated that the animals’ blink frequency is also regulated by the lighting conditions in their environment. During the day, the animals rest in the reef aquarium in a dimly lit cave, keeping their light organs closed for the most part, interrupted only by brief blinks. During their active phase at night, on the other hand, the fish exhibit a high blink frequency. The precise function of that blink pattern is not yet fully understood. Additional analyses will reveal whether the fish use blink patterns to communicate or whether they confuse predators by blinking in a swarm.

Generation of light by organisms is common in nature. The by far most instances of luminescent organisms occur in marine habitats and can be found in numerous systematic groups. Approximately 90 per cent of all deep-sea animals are bioluminescent. Among vertebrates, fish are the only ones to display bioluminescence. Fish either possess photophores where they generate light, or they accommodate symbiotic bacteria that emit light.

That light may be used for communication, for luring in prey organisms, or for defence; in many instances, the precise function is not obvious, and it is difficult to analyse it in deep-sea organisms. “Due to extreme pressure differences, it’s virtually impossible to bring the fish to the surface without harming them,” say Stefan Herlitze and Jens Hellinger. The flashlight fish Anomalops katoptron is an exception. As it lives in relatively shallow waters, it can be kept in an aquarium.